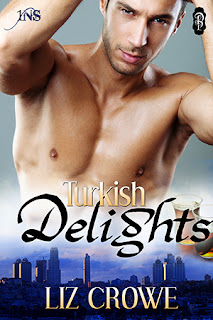 Sure are pretty covers, huh?  Well, underneath those covers are some of the best books that I have read all year.  I have decided to review the whole series instead of individually.  There is a reason for that I will get to that later.


Turkish Delights is a story about an American woman, Elle, that is has been living in Turkey for the past couple of years.  Elle finds herself falling in love with a Turkish man, Emre, fifteen years her junior. When she decides to contract to Madame Eve’s dating service for a night, she has no idea what she is store for and the delights that wait for her.  I adored this book from the start.  Elle is a strong woman that has fallen for Emre and thinks that it would never work between them.  Emre has one shot with Elle before she leaves and believes that a relationship between them is destiny.   You can feel the intensity that Elle and Emre have for one another and the lengths that they go to be with each other.  Age is just a number and it doesn’t care if two people love each other.  This is a multi-cultural story actually set in Turkey.  The richness in Liz’s writing shows the depth of her love for the country and the people.  I can still smell the spice bazaar as I type.  While the sex is hot from the beginning, what sets it apart is the emotional depth and intensity that Liz has created between Elle and Emre.  Elle and Emre set the tone for the entire series and it is best that you read the books in order.

Blue Cruise was a rare book for me to read for a couple of reasons.  I laughed, I fell in love, I cried buckets and I sighed.  This is only my second m/m read so I wasn’t sure what to expect.  Caleb and Tarkan were destined from the start.  We pick up their story after being together for a couple of years.  Caleb is Elle’s personal assistant and instrumental in talking some sense into Elle’s head about Emre.  Tarkan and Emre are twins and couldn’t be more different.  Tarkan’s culture sees their relationship as wrong and his father has made the decision that he does his stint in the military.  Much to horror of Caleb, Elle and Tarkan’s family, his station is attacked.  Caleb is numb with grief and has a hard time being around Emre because of it.  Elle decides that the only way for Caleb to deal with his grief is to contact Madame Eve and set up a Blue Cruise for him.  Deciding that Elle is right, Caleb goes back to Turkey and finally starts to heal the pain that has had a hold on him for the past couple of years.  Adem is perfect for Caleb.  He doesn’t rush Caleb into a relationship and he listens to Caleb.  The communication between Caleb and Adem was open, honest and done with a deft hand.  Again, the emotional intensity between Elle, Emre, Tarkan, Caleb and Adem is layered and believable.
I will admit that Tulip Princess was a hard read for me.  It is the final book in the trilogy of the Deniz siblings.  Lale is wild and doesn’t seem to want to settle down anytime soon.    Her parents are at their wit’s end and decide that she needs to go live with Elle and Emre.  While she is there, she helps them with her niece and finds that she doesn’t need that lifestyle anymore.  When Elle decides that Lale needs a night out, she sets her up with Madame Eve and Emre is livid.  The intense dialogue between Lale, Emre and Elle is beautifully written and handled with humor (yes, you will chuckle at Elle) and honesty.    While I liked Lale very much, I didn’t like Andreas in the beginning.  It wasn’t until the end of the book that I finally made a connection with him.  Lale and Andreas were too much alike and it took them to fall apart before they realized that they were perfect for each other.
As a whole, the series was one of the best trilogies that I have ever read.  The writing, pacing, plots and dialogue were beautifully done.  Each book delivered on the emotional scale for me, too.  With Elle/Emre, I was laughing and sighing.  With Tarkan/Caleb/Adem, it was crying and joys in Caleb’s healing.  Lale/Andreas it was frustration and then belief that they would make it as a couple.  If you have put off buying the series because its multicultural or that some of the subject matter that Liz brings to the surface is not for you…think again.  It is a series that should be read, discussed and re-read again.  A word of caution though…okay, a couple…bring tissues, carve out a couple of hours and please, please read them in order.  You can read them as stand alones but reading them order only enhances each book.