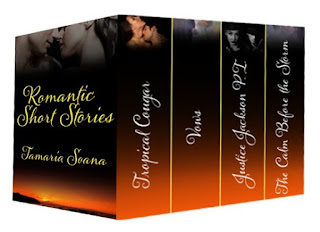 Tropical Cougar
Twenty-six-year-old Seth Reynolds finds his fresh start as a bartender at an exclusive resort in Jamaica. One night he meets the very sexy and much older, Sylvia Radcliff.

When Seth sets out to seduce the most enchanting woman he’s ever met, he never expects an island romance to change his life completely.

Vows
Addison Klein’s marriage is falling apart. She’s contemplating whether she should fight to keep her family together or walk away. After the sudden death of her best friend, Peyton, and a vicious fight with her husband, Tyler, Addison knows she needs to decide what the future will holds.

Just when Addison feels she’s alone in making this life altering decision, she gets a little guidance from her guardian angel and rediscovers herself

With a new outlook on life Addison sets a plan in motion to seduce her husband.

Justice Jackson P.I.
Sultry waitress Andrea Bloome serves cocktails at The Lounge, the hottest jazz club in Chicago. When her life is in danger, she turns to charismatic P.I. Justice Jackson for help.
Can he save her from the people who are meant to protect her? Or will he be blinded by the overwhelming attraction between them?

The Calm Before the Storm
The last two years of Erica Bloom’s life have been spent looking over her shoulder. Sawyer Marsh promised the day she filed for divorce and left him, that if he couldn’t have her no one would. The news of Sawyer’s engagement allows Erica to finally let her guard down and enjoy her new life and budding relationship with Brock Maxwell.

While away relaxing at Brock’s vacation home on the Willow Lake, the past comes back to haunt her. Were the past few years just the calm before the storm?
Warning: Contains Domestic Violence

Tamaria Soana writes contemporary romance stories with a high heat level that always end with a ‘happily ever after’. Growing up, she loved to read and make up new places in her head to escape to. In her late teens she began writing short stories and poetry. It wasn’t until her late thirties before she began to spin a full story.She’s married and a stay-at-home mom of two beautiful young girls. They reside in Western New York. Cuddling up with a good book under an electric throw is her way to escape the cold Buffalo nights. Author Links:    Site    Facebook    Twitter   YouTube
~Giveaway~


Tamaria is giving away a 3 piece Bath & Body Works Twilight Woods  (golden sugar scrub, triple moisture body cram and a shower puff) set during the tour. US ONLY

. For a chance to win please fill out the rafflecopter below.