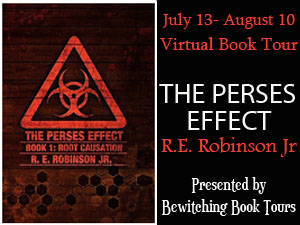 Harlie has been so behind with her family’s recent move that the review for this book will up later today.  I’m very sorry.  Great book, I’ll tell you.  On with the promo…

The Perses Effect
By R.E. Robinson Jr
Blurb:
The world has been changed forever. Death and mutation have swept across the planet leaving some of the survivors altered into non-human races and gaining powers that would take time to comprehend. Always thinking ahead Evan Root invited family and friends to live on his farm shortly before the comet that started it all was destroyed.
As the remaining population rebuilds Evan Root and his wife Jordan are producing bio-fuel to use and trade. On a routine trip to the market murmurs of disappearing town’s people span the crowd. While at the market Evan’s group is ambushed and when he finally makes it back to the farm he finds out his wife has been abducted. Evan feels her abduction has everything to do with her power.
Hoping it will lead him to his wife Evan and his companions must discover who or what is behind the disappearances while defending themselves at every turn.
Book Trailer: http://www.youtube.com/watch?v=tFxoHUeavP8
Amazon Amazon Paperback
Barnes and Noble Hardcover           Nook
https://www.facebook.com/pages/The-Perses-Effect/200288616653927
http://www.goodreads.com/book/show/10793607-the-perses-effect
Bio: 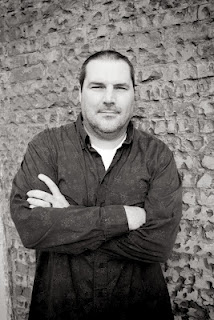 Ronald E. Robinson Jr. served in the US Army and has a criminal justice degree. He lives in Georgia with his family.

5 thoughts on “The Perses Effect – Promo”