Giveaway Alert!!!!  I’m participating in Under The Covers “Love is in the Air” Blog Hop.  Leave a comment on this post for a chance to win 3 Harlequin paperbacks.  Open internationally.  Just tell me what your favorite Harlequin Line is..i.e., Desire, Blaze, etc.  Winner will be chosen by Random.org and ends February 14th.  Good luck everyone.  For more places to go and win other prizes, follow this link.  Its on the top right hand side of the page. 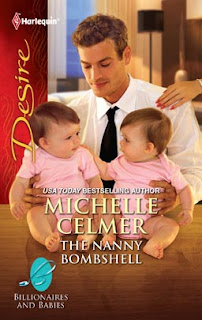 When Sierra Evans gave her twins up for adoption, she didn’t expect tragedy to leave them in the care of their uncle, a notorious millionaire playboy. Now Sierra will stop at nothing to protect her children—even if it means going undercover as the perfect nanny…with a perfectly shocking secret.

Former hockey player and entrepreneur Coop Landon can tell when someone’s running a game. Clearly, his new nanny’s not after his money or fame. Discovering her scheme is a challenge he’s more than ready for, especially when seduction is the winning strategy. But the truth might cost them both dearly….

As most people know I love my Harlequins and this little gem from the Desire line does not disappoint.  It has the usual troupe of a woman getting pregnant, giving the babies up for adoption, the adoptive parents killed and then falling for the babies guardian.  But wait…this story is so much more than that.  Hold on to your hats because the twist at the end will leave you speechless.

Sierra is a pediatric nurse that have no social life anymore.  She has been taking care of her father for the last couple of years and now that he is an assisted living facility.  Imagine her shock when she sees on the news that your babies adoptive parents are killed.  Who will take care of them now?  What is she going to do?  When she sees that Coop is their guardian that needs a nanny, she applies.  Of course, she gets the job but now what?  Does she tell him the truth or just leave it be for now?  The one thing she didn’t expect was to fall in love.

Coop Landon was giving guardianship of his twin nieces without a net.  As a retired hockey player, he figured that Sierra was after his money and name.  After all that’s what most women want from him other than a good time.  Coop has decided that now that he has the twins, it time to stop playing the field and settle down.  What he didn’t except was to fall in love with such an ordinary woman that is extraordinary.  She makes him feel, laugh, and love.  She makes him a better person.

The Nanny Bombshell is next to perfection.  The characters are nicely drawn out, the pacing is great and the bedroom scenes are there.  Just remember that its a Desire but the scenes are hot.  They are emotional and heartfelt.  Sierra is a strong heroine and is the perfect match for the playboy jock.  Coop is terrific in the sense that he’s not a jerk and actually has a good head on his shoulders.  He realizes when he gets the twins that the life he truly wants is within his grasp.  I did not see the twist or truth in the end and it packed a wallop.  It just made their story that much more emotionally enriching.

I would highly recommend anything that Michele Celmer writes.  Trust me, I’ve pretty much read all of her Desire’s but this one scores on a whole lot levels for me.  Its funny, sexy and emotional.

5 Harlies and a totally recommended read

25 thoughts on “The Nanny Bombshell by Michelle Celmer Review/Giveaway”