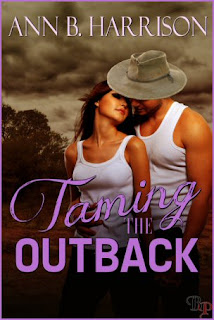 Title: Taming the Outback
Author: Ann B. Harrison
Publisher: Breathless Press
Length: 159 pages
Genre: Contemporary Romance
AVAILABLE AT:
Amazon – http://www.amazon.com/Taming-the-Outback-ebook/dp/B0091NYCVU
All Romance eBooks – https://www.allromanceebooks.com/product-tamingtheoutback-918295-148.html
Smashwords – https://www.smashwords.com/books/view/219617
BLURB:
Is Libby prepared to give up her new home for a chance to roll Nathan in the hay when her libido wakes up after five long years?
Nathan Miller rattles Libby’s nerves more than she cares to admit. He is the one person that stands between her and the family home that has been left to her.
So why then is he the guy that stirs her up to such an extent that her body pulses with the need to have him? They do nothing but clash and snap at one another and he makes no bones about the fact that she shouldn’t be on the station, but back in the city where he thinks she belongs.
Libby fights to learn about her new home while struggling to find a way into Nathans heart. She almost loses it all when a flood hits their tiny town and rips through her farm putting her daughter’s life in danger.
Will she be able to convince him that she is not the irresponsible city chick he has dubbed her or will he see her as she truly is, a woman in love with him.
EXCERPT #1:
“That’s just it, sweetheart,” Nathan exploded, his frustration finally rearing its ugly head as he rounded on her, giving her the brunt of his foul mood. “This is a harsh country, and buts just don’t cut it out here. You are cut out for the city life for Christ’s sake. You’re not a farmer. You don’t have the slightest idea of what you’re getting yourself into. You proved that by almost losing Tom and your daughter.” The look on Holly’s face when he had found them was still burned into his mind. The poor kid had been terrified she wasn’t going to be able to hold onto Tom against the rush of water. He couldn’t bear to think of what would have happened if he hadn’t made it in time. How can I be sure Libby won’t put her in any more danger now that I have had my heartstrings tugged tight? He stood and looked down on her, trying to keep his face void of emotions but his heart was telling him to take her in his arms and put them both out of their misery. “How many more times are you going to put those kids at risk?”
“Now just you look here,” she cried, pushing him back and struggling to get to her feet. “I may be a barmaid, and I know I have a lot to learn, but learn I will. And for your information, I would never knowingly put my kids in danger. Neither would Tom.”
“You don’t belong here,” he ground out. Though aware the words he was saying were hurtful, he couldn’t stop himself. They were his only defense. He was trying to will her away from him the only way he knew how, unwilling to risk his heart to a city dweller again. As much as he wanted this woman, he wouldn’t let her know it. She had the capacity to break his heart when the going got tough, which was in the cards looking at the state of her farm, and he wasn’t sure he would survive another crushed heart. Better to get her out of here now before he caved in. “Get used to the idea and move on back home where you belong.”
“Why? So you can take over?” She practically spat at him. “I will not give up what my family has passed down to me. It’s mine, and you aren’t going to get it.”
“There’s more than one way to get what I want.” Nathan hauled her into his arms.
Libby tried to push him away, but the contact of her breasts on his hard chest knocked the wind out of him, and he held onto her for dear life. He groaned deep in his throat as he pressed his lips against hers, demanding and hungry. The heat rushed through his veins as his hands slid down to cup her denim-clad butt, pulling her against his hips, leaving her in no doubt he wanted her. She wound her arms around his neck as she molded her body closer to his, impatient noises coming from her mouth.

ABOUT THE AUTHOR:
Ann swears she was born with a book in her hand and has never put it down. A lifelong love of reading has finally culminated in achieving her dream of writing…and publication.
She lives in the middle of the desert in Australia in a small mining town with her own handsome hero of many years. Ann has always loved the ups and downs of life in small communities and she shares this with readers in her rural romances. 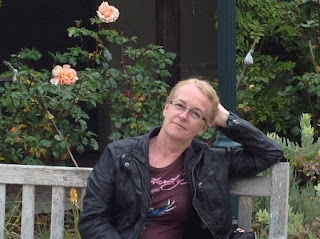 Strong, spunky heroines with a good dose of sass thrown in feature in her stories. Of course these women need an equally strong hero. Bring on the Outback hero and watch the passion ignite.
When not writing, Ann runs a day care centre and looks after young children for working Mums and Dads. In her spare time, she enjoys reading, walking her very large dog, Hugo, and fighting with her computer.
Visit Ann at http://annbharrison.com