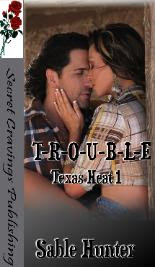 I would like to thank Sable for stopping by again.  I gave her ten questions to answer.  Here are her answers…

I am definitely a cotton person.  I love the cool, crisp feel of cotton.  Former Texas Congressman and presidential candidate Phill Gramm was quoted as saying, “Half the world doesn’t know the joys of wearing cotton underwear.”  I do.  Hey, it breathes – feels like you are air conditioned in interesting places.
When I’m fantasizing about myself in a sexual situation – I always imagine me wearing white, cotton, barely-there babydolls with peekaboo eyelet over my breasts.  I am Creole – so my skintone is a bit darker and my hair is black – so it works for me.
In all of my books – my heroines dress like me.  They wear cotton sundresses, cotton camisoles and white eyelet boudoir sets.  The cotton aspects reflect a sweet, wholesome, yet – cuddly persona that I like to create for my girls.  Most of them are innocent, yet have faced tremendous challenges that their heroes help them overcome.  And the white cotton helps me define their character.
So – cotton – the fabric of our lives – that’s my opinion, too.

7.  Favorite food –
I am a foodie.  I love to cook.  And I’m good at it.  I can make grown men weep with delight at my cooking.
And I cook two main types, of course – Cajun/Creole and Tex/Mex.  My favorite food to eat is gumbo.  I make it from scratch – my roux cooks in a huge iron skillet in the oven and I add the sacred Trinity (bell peppers, onion and celery) and chicken, andouille sausage and shrimp.  It’s good the first day but better the second.  On Mondays, I cook red beans and rice – because that’s what you’re supposed to do.
But I can also make burritos and brisket that will bring you to your knees.
So, I have proven the fact that the way to a man’s heart is through his stomach – but there are other delightful places I like to please on him as well.
8.  When did you start writing?
I have been writing for about three years.  My first novels were self-published on kindle and I made enough to support myself that way.  The industry treated me very well.  I advertised, blogged – got to know people and made many friends, as well as built a decent reader base.  But I wanted to try being ‘traditionally’ published.  So, I am – I have sold 5 books to Secret Cravings Publishing.  TROUBLE is out now, and A Wishing Moon will come out in a few days, with three more to be released by the end of January.  But I also am still self-publishing.  My most popular series is Hell Yeah! on kindle and I get about 3 letters a day from new readers urging me to write faster and finish the next one  – so HER MAGIC TOUCH will be out on kindle in October.
9.  If money were no object, where would you like to live?
If money were no object, I would maintain three homes.  The first would be an apartment in Austin, so I could walk to Whole Foods and see the tower on the University of Texas campus from my window.
I would also have a house in the Garden District of Louisiana near Tulane University so I could ride the street car to the French Quarter and eat supper at Emeril Lagasse’s.
My third residence would be in Georgetown, Colorado.  It’s supposedly one of the most haunted places in the U.S.  And it is certainly one of the most scenic.  I love the mountains in Colorado.  There is a house there that actually has a stream running under it – I want that house.  I can just imagine that they have a glass floor where you can watch the water rushing beneath you.  Now, I haven’t figured out what they do when the water rises – maybe the house floats – who knows.  But if money were no object – I guess I could solve that problem.
10.  What’s next for you?
I have four Works In Progress – one for each of my series.  And they will all come out next year.  I am also starting a new series and the first book will be entitled Burning Love.  It stars a hero who was inspired by the Sons of Guns TV program.  He owns a gun store in Louisiana and hunts alligators for fun.  He will be my first non-Texas hero – but for me – it’s just going home.
Don’t forget to stop at Deep in the Heart Romance http://www.deepintheheartromance.com/ for the next stop.  I would like to thank Sable for stopping by today.  Don’t forget to leave your name and email for a chance to win a copy of T-R-O-U-B-L-E.