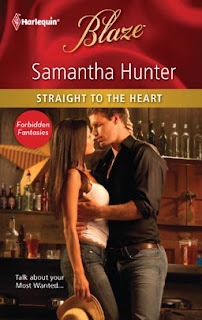 Straight to the Heart

U.S. Marshal Joanna Wyatt has to make her witness protection detail work even though the witness doesn’t know he’s being protected. Posing as a down-on-her-luck waitress at Ben Callahan’s Texas roadhouse, she’ll be able to keep a close eye on the man, which is no hardship. Falling into bed with the insanely sexy former navy SEAL with the rodeo swagger and whiskey-colored eyes is not the problem. The problem is he doesn’t believe he’s a target!

Ben’s been in plenty of dicey situations before, so he’s not worried. What does worry him, however, is the sexy waitress he can’t seem to keep his hands off of. He knows it’s not the right time to get involved. Still, the heat between them is irresistible, inevitable.

But as their guards go down, danger draws closer….

As most people that really know me, this review should be a piece of cake, right?  Harlequin book?  Check.  Blaze imprint?  Check.  Samantha Hunter?  Check.  Forming the words that will have you running out to buy this book based on my review?  Sort of.  I know you’re thinking that the review will be bad but in reality, it will be good.  J  It’s just hard to form the words other than this book rocks…

When US Marshal Joanna Wyatt was assigned to be undercover to make sure a witness testified at a trial in three weeks, she wasn’t exactly happy about it.  Joanna is a field agent; she catches and brings them.  One mistake on her last assignment has sidelined her to undercover work for now.  Ben Callahan is a former Navy SEAL that is on the rodeo circuit.  Ben ends up at the wrong place at the wrong time and witnesses a murder.  He declines any kind of witness protection, so without his knowledge, the US Marshals send in Joanna as his new waitress.

What I didn’t expect from Joanna was her straightforwardness to the job and her view on relationships.  Growing up without a mother should have done a wonder on her but it only makes her stronger.  She had the love and affection of her dad and Jarrod.  What Joanna lacks in relationship is her ability to believe that she can actually have one.  She’s no wall flower but upon meeting Ben, she can’t resist the urge and when she gets into too deep, she flees.

Ben has never had used a target in any mission for sex.  But he is finding it hard to resist Joanna.  When the danger comes home, he tries to protect Joanna but Joanna is the one that ends up protecting him and his family.  This does not sit well with him at first but finally admits that he and his family need her.

In most Blaze books, the secondary characters are only meant to be supporting but Charlie and Lisa are much more than that.  Charlie is an old friend of Ben’s and Lisa works at Ben’s bar.  Charlie and Lisa are an integral part of the plot and provide much more than the usual friendship and shoulder to cry on.  Ms. Hunter did a very nice job with them and I’m hoping for a book about them in the future.  Hint, hint.

Straight to the Heart by Samantha Hunter is one the best Blaze books that I have read, if ever.  She hits all the things in a book that I like.  Romance, friendship, loyalty, hawt sex, intense emotions and the ability to weave a suspense element that doesn’t over power the story.  Joanna and Ben didn’t have any big hang ups going into the relationship but you feel the emotions that surface that neither one of them have experienced.

Just remember this isn’t your grandmother’s nor your mother’s Harlequin.  J

I read Joanna’s brother’s book, Hard to Resist, so I had a little background on her family and her line of work.  (Check out Jarrod and Lacey’s book…it’s hot and extremely good)

I highly, highly recommend Straight to the Heart to anyone.  Yes, anyone.  It’s that good.

5 thoughts on “Straight to the Heart by Samantha Hunter-review”