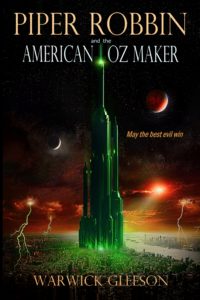 An adult fantasy that takes one of America’s favorite tales and transforms it into a dark and epic landscape few can escape much less understand. Imagine Potter meets Avengers in Emerald city and you’re getting close.

After a homicidal alien from Orion arrives on Earth intent on annihilating human life, the 21st century’s greatest sorcerers create a network of seven Oz-like city worlds designed to harbor the human race in a newly formed utopia while also protecting it from the alien entity. But the alien is far more magically powerful than anyone suspected. Piper Robbin, ancient daughter of the Earth’s greatest sorcerer inventor, Edison Godfellow, must sacrifice all to defeat the implacable force that calls itself “The Witch Queen of Oz,” and quickly, before Earth becomes only a cold cinder floating among the stars.

Suddenly outside on the street, she stood facing in the direction of the Cambodian take-out, her entire nervous system tingling and parts shaking as if with Parkinson’s due to the abrupt teleportation against her will. The night fell black and splattered with garish light. She looked up to see the Wall Street corpse directly above her, and she swore he was staring down with an oafish mocking expression as if he knew something she did not. Then the ground quaked, and like balloons filled with molten glass, every window in her apartment building exploded. The shrieks of burning people next. How many she did not know, but she knew she must save them.

Before Piper could act, a whip of turbulent energy uncoiled like a sun flare from her living room window eight stories above. She observed the Wall Street corpse nearby disintegrate into a memory of burning sparks. She immediately recognized the nature of the force—a Tao magical wavelength strong as a thunderstorm yet contained, compressed to a small vortex, and potent enough to kidnap half of Brooklyn. 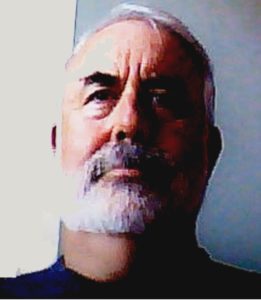 Warwick Gleeson is a dedicated writer of screenplays, short stories, novels, and poetry. He has lived in both LA and NYC and worked many different jobs in his life, everything from roofer to waiter to small business owner to government analyst. He was the major writer, creator, and senior story editor for another project published by Del Sol Press called “War of the World Makers” that debuted in 2017. The novel has since won four national novel awards (two first place and two place) for SFF. Warwick is a big fan of great SFF television writing, like the kind you find in Emerald City, Gotham, The Expanse, and Umbrella Academy. He now lives in Tuscon, AZ, with a fat lazy cat and his most wonderful wife who is also a writer.