This post is part of a virtual book tour organized by Goddess Fish Promotions. Nancy Boyarsky will be awarding a $20 Amazon or B/N GC to a randomly drawn winner via rafflecopter during the tour. Click on the tour banner to see the other stops on the tour. 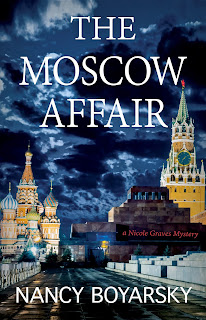 In this fast-paced mystery, P.I. Nicole Graves agrees to an unusual, short-term assignment working for MI6 in Russia. It sounds straightforward, even pleasant: a two-week luxury riverboat cruise on the Volga, observing a group of fellow passengers and filing a daily report on their activities. It’s simple enough, except for one caveat: No matter what these people do, she’s to tell her handler at MI6—no one else, especially not the Russian police. When one of the riverboat passengers winds up dead, Nicole realizes this assignment was anything but straightforward.

Soon, Nicole is immersed in a high-stakes game of murder and espionage where trusting a stranger can be as deadly as a bullet.

“Nicole Graves is the best fictional sleuth to come down the pike since Sue Grafton’s Kinsey Millhone.” –Laura Levine, bestselling author of the Jaine Austen Mysteries

The Nicole Graves Mysteries have been compared to the mysteries of Mary Higgins Clark and praised for contributing to the “women-driven mystery field with panache” (Foreword Reviews) as well as for their “hold-onto-the-bar roller coaster” plots (RT Book Reviews).

When Nicole opened the door, Kolkov was even more abrupt than on his previous visit. No greeting, just, “Get dressed. I take you in for questioning.” He talked fast and fairly vibrated with impatience.

“Why can’t we do it here like before?” Nicole said.

“Get dressed!” He shouted, pointing to the bedroom. “I give five minutes.”

Kolkov was waiting at the door and seemed to be in a tremendous hurry. As she approached, he stepped toward her and firmly gripped her by the arm, as if he expected her to try to escape. She pulled back, pointing to the closet. “I have to get my jacket,” she said, pointing to the hall closet. He let go so she could pull out her zippered hoody and put it on. It was going to be cold out, and longed for her warm coat, but it was in the hamper, stained with Chet’s blood. Before she could finish zipping up the hoody, Kolkov took hold of her arm again and was pulling her out the door.

Other passengers stared as Kolkov led Nicole down to the main deck and across the ramp to the ship next to theirs. Surely they could tell she was being taken from the ship involuntarily; perhaps they recognized Kolkov from the day before. But no one stepped forward to ask what was happening. Nicole wondered what they were thinking.

The pair of them drew an even larger audience as they walked through the four vessels anchored between Queen of the Volga and the dock. Finally, they reached the street, where a boxy black sedan was standing at the curb with a uniformed policeman at the wheel. Kolkov put Nicole in back, not relaxing his hold on her until he was about to close the door. He climbed in the the front seat, and they took off. 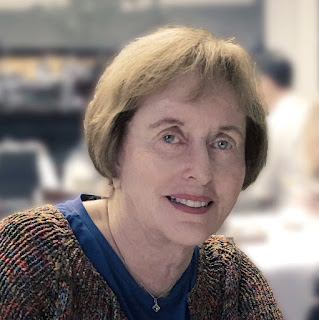 Nancy Boyarsky is the author of the Nicole Graves Mysteries. Her sixth installment of the series will be released September 2021.

Nancy has been a writer and editor for her entire working career. She coauthored Backroom Politics, a New York Times notable book, with her husband, Bill Boyarsky. She has written textbooks on the justice system and contributed to anthologies, including In the Running about women’s political campaigns and The Challenge of California. She has also written for the Los Angeles Times, West magazine, Forbes, McCalls, Playgirl, Westways, and other publications. She was communications director for political affairs for ARCO.

In addition to writing mysteries, Nancy is producer and director of the “Inside Golden State Politics” podcast.