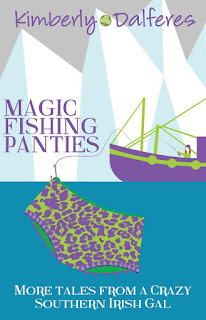 Have you taken to blaming the little people for stealing all the things you can’t find, like the damn Chico’s gift card you are 100% sure you left on the dresser? When you take off your bra, is it as if an airbag has deployed? Have you more than once started a sentence with the phrase “Back when I was in school…”? If you answered yes to any of these questions, welcome to the middle-aged cheap seats.
Magic Fishing Panties is the follow-up to Dalferes’ debut book I Was in Love With a Short Man Once. This collection of humorous tales offers new perspective from the self-proclaimed crazy Southern Irish gal and recent inductee into “Club 50.” Rather than wallow in the self-pity often induced by sagging jaw lines, empty nests, and menopause, the author offers colorful depictions of life in the middle. You will find yourself contemplating:
·       How would you react to being in public during an earthquake? Oh, and you’re naked.
·       The wedding starts in five minutes and your best friend needs to pump her breast milk, but all the bathrooms are occupied. Where should she go to quickly resolve her situation?
·       You are depressed and alone on your 39th birthday. What do you do? Hint: tattoo anyone?
You’ll come to know Kimba as a true gal pal, someone who will gladly lend you her size 11 black boots, favorite red coat, and anything else you might need to rule the world – with the exception of her magic fishing panties. Because letting you borrow those would be a little weird, don’t ya think?

Kimberly “Kimba” Dalferes is a native Floridian, but currently pretends to be a Virginian. She is an accomplished king salmon slayer, estate sale junkie, and sometimes writes books. Her first book, I Was In Love With a Short Man Once, was published in 2011, with a 2nd edition released in 2015 by Booktrope Publishing. Her second book, Magic Fishing Panties, also with Booktrope Publishing, will be released August 2015. Her stories have been featured in diverse publications including Voices from Smith Mountain Lake (an anthology published by the Smith Mountain Arts Council), The Roanoke Times, Hippocampus Magazine, The Erma Bombeck Writers’ Workshop, Better After Fifty, Laugh Lines-Finding Your Funny, and Midlife Boulevard. She is also a columnist–her humor column Dock Tale Hour appears regularly in Laker Magazine (an affiliate of Times-World LLC). She recently had a limerick published by the Washington Post and she vehemently believes this is a legit publishing cred.
The author happily serves on the Board of Governors for the Virginia Writers Club (VWC). She is a member of the Orangeberry Book Tours Hall of Fame (2012), is a featured writer inThe Authors Show, 50 Great Writers You Should Be Reading (2012), and won gold in the AuthorsDB 2013 Book Cover Contest. She has also been recognized for her nonfiction writing as the winner of the 2014 Golden Nib Award; VWC’s highest honor.
Dalferes divides her time between Fairfax and Smith Mountain Lake, Virginia with husband Greg, Bonz the cat, and occasionally her son Jimmy, when he is home from college. She is also often found hanging out in The Middle-Aged Cheap Seats–her blog. She continues to sing hopelessly off-key and waits patiently for that phone call from George Clooney.

We gals possess one distinctive disadvantage out on the fishing boats. It’s the “head.” For the guys, their need to relieve themselves is accomplished by a quick pit stop over the bow of the boat. For the gals, well, our equipment doesn’t work that way. A woman’s use of the bathroom on a fishing boat is a time-consuming process. I use the term “bathroom” here with a bit of poetic license. Often, the facilities are nothing more than a bucket. You can take as many countermeasures as possible: limit the coffee consumption and definitely go at the lodge before you get on the boat. But, eventually, you gotta go.
HOW TO PEE ON THE SEA
Step 1: The captain clears out the cabin for a little semblance of privacy.
Step 2: Layers of clothing (gloves, hat, scarf, rain slicker) are removed.
Step 3: The bibs must be unhooked, but—and this is important—you mustn’t remove them fully because this would entail also removing your boots.
Step 4: Shuffle over to the cubby area under the bow. You’re lucky if there is a cubby area.
Step 5: Back in, derriere first, drop the bib tops you’ve been holding up, unzip and drop your pants, followed by your underwear, and attempt to squat/land upon the toilet/bucket.
Step 6: Pull across the battered blue plastic sheet that is supposed to provide some modicum of cover.
Step 7: Pray the toilet paper is somewhere within reach.
Step 8: Anchor your hands and feet against the sides of the cubby to steady yourself as the boat sways and rocks.
Step 9: Proceed with, well, you know.
Step 10: Attempt to rise, remaining in a somewhat stooped position in order to avoid bumping your head. (I did not forget about the use of the toilet paper; I’m trying to keep this classy.)
Step 11: While remaining hunched over, attempt to pull up your underwear and your pants in the cubby. Damn near impossible.
Step 12: Pull back the blue plastic sheet and while once again attempting to hold up your pants and bibs, turnaround, bend over, and pull the lever which evacuates the contents of bowl.
Step 13: Turn back around, continue to hold up your bibs, and shuffle back out into the main cabin.
Step 14: Refasten your pants and your bibs, put back on all your clothing—rain gear, hat, gloves, and scarf—and head back out to fishing.
What could possibly go wrong?
________________________________________________________________________
Hosted by: