This post is part of a virtual book tour organized by Goddess Fish Promotions. Judy Penz Sheluk will be awarding a $10 Amazon/BN GC to a randomly drawn winner via rafflecopter during the tour. Click on the tour banner to see the other stops on the tour. 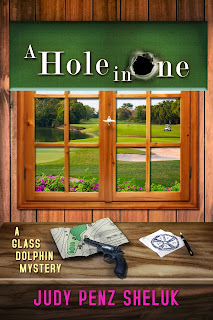 Hoping to promote the Glass Dolphin antiques shop, co-owners Arabella Carpenter and Emily Garland agree to sponsor a hole in one contest at a charity golf tournament. The publicity turns out to be anything but positive, however, when Arabella’s errant tee shot lands in the woods next to a corpse.

They soon learn that the victim is closely related to Arabella’s ex-husband, who had been acting as the Course Marshal. With means, opportunity, and more than enough motive, he soon becomes the police department’s prime suspect, leaving Arabella and Emily determined to clear his name—even if they’re not entirely convinced of his innocence.

Dogged by incriminating online posts from an anonymous blogger, they track down leads from Emily’s ex-fiancé (and the woman he left Emily for), an Elvis impersonator, and a retired antiques mall vendor with a secret of her own.

All trails lead to a mysterious cult that may have something to do with the murder. Can Arabella and Emily identify the killer before the murderer comes after them?

Arabella Carpenter let the others go first. All three managed to clear the pond with their tee shot and land on the green, but not one was anywhere close to getting a hole in one. Arabella breathed a sigh of relief—since they were sponsoring the contest, their foursome might not be eligible to win, but it still freaked her out to think someone else might. She went through her mental prep, took her swing, and watched as her ball went directly into the woods.

“Hey, you made it over the water,” Hudson said, hopping into his cart. “For someone just starting out, that’s not a bad shot.”

Arabella caught Emily’s look and smiled. He really was a nice guy. “Thanks, Hudson. Whether I can find my ball is an entirely different story. Why don’t I look for it while you guys putt in? I’m sure one of you will be able to make the shot.”

They crossed the pond on a wooden bridge just wide enough for their golf carts, parked on the path next to the hole, and grabbed their putters. Luke, Hudson, and Emily went to the green and began debating which ball to hit. Arabella trundled over to the woods, feeling stupid and hoping like hell it wasn’t infested with poison ivy. The woods were thicker than she’d expected. She walked in a couple of feet, using her putter to push the branches aside.

That’s when she started to scream. 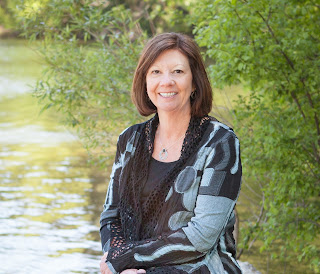 An Amazon international bestselling author, Judy Penz Sheluk is the author of two mystery series: The Glass Dolphin Mysteries (THE HANGED MAN’S NOOSE and A HOLE IN ONE) and The Marketville Mysteries (SKELETONS IN THE ATTIC). Her short crime fiction appears is included in several collections, including LIVE FREE OR TRI.

Judy is a member of Sisters in Crime, International Thriller Writers, the Short Mystery Fiction Society, and Crime Writers of Canada, where she currently serves on the Board of Directors as the Regional Representative for Toronto/Southern Ontario.

Find Judy on her website/blog at www.judypenzsheluk.com, where she interviews and showcases the works of other authors and blogs about the writing life.

Buy Links for A HOLE IN ONE: