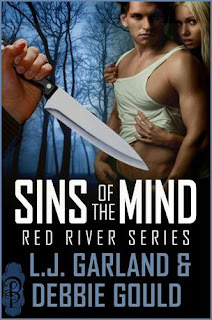 Title: Sins of the Mind (Red River, Book 1)
Author: L.J. Garland & Debbie Gould
Publisher: Decadent Publishing
Length: 87,000 words
Genres: Contemporary, Mystery/Thriller, Suspense, Romance
Available at:
Decadent Publishing
Blurb:
Seven years ago, Abby Montgomery survived a brutal attack. Now she is ready to put her pain in the past and move on with her life. The problem is, one by one the men in her life are being viciously murdered.
The detective assigned to the case, Ethan Parker, has demons of his own to hide. As the danger gets closer to Abby, so does Ethan. But can they get past his secrets before the killer gets to them? Sometimes the sins of the mind are more depraved than the sins of the heart.
Excerpt:
“Moment?” He raised his eyebrows, tried for a surprised expression. “We were having a moment? Where was I?”
A husky laugh escaped Abby’s lips. She gave him a playful shove, but he caught her hand, his fingers encircling her delicate wrist. With great care, he bowed his head and pressed his lips to the center of her palm. Her sharp intake of air told him she liked it.
“Is this the moment you were referring to?” He kissed her wrist. “Or this?” His mouth grazed along her skin, up the side of her neck to the tender point below her ear.
“Mmm.” She shivered.
He inhaled, reveled in her unique scent. A mixture of spicy vanilla and exotic flowers invaded his senses and sent the room slowly spinning. Primal lust roared through him, demanded he possess her in a rush of carnal passion.
But Ethan resisted.
Intent on enticing Abby into a wild, heated frenzy, he trailed the tip of his tongue along her throat. Her pulse hammered beneath his ardent attention, and he reveled in her response. His fingers slid over her supple skin. One hand sought the silky tresses adorning her head while the other coaxed her legs across his lap and then slipped around her waist.
He pulled back, stared into her lovely face. Eyelids fluttering, she sighed in his arms. When she looked at him, desire burned bright in her eyes. His heart stuttered at the sight, and hot need rushed to his groin.
“Abby.” Her name rolled from his tongue in a mix of desperation and lust. A voracious hunger to taste every inch of her body washed over him. The urge to kiss the small of her back, to run his tongue along her skin, delving and dipping into her secret, sensitive places, all but overwhelmed him. “Tell me to stop. If you’re not ready, honey, tell me to stop right now and by all that’s holy, I will. But you need to know how much I want you right now.”
About the Authors:
L.J. Garland ~ Though born and raised in the south, L.J. Garland has lived on both the east and west coasts. She adores traveling, the latest adventures added to her Bucket List: Machu Pichu and Australia’s Rainforest and Great Barrier Reef.
Married to her best friend for over twenty years, she spends her time home schooling three rambunctious boys, editing in the epub industry, and writing stories that she hopes catches her readers’ imaginations as much as the characters and plotlines captivate her. In her spare time (what there is of it LOL), she has a multitude of hobbies, including building archery equipment from scratch and creating stained glass. She has a passion for anything that goes Boom!…from fireworks to high-powered combat rifles…it’s all good. She and her husband are both rated helicopter pilots and spent their 10th anniversary flying cross-country from east to west coast…an adventure she highly recommends.
A member of RWA, she has several published books, and is hard at work, brainstorming and writing her next romance story.
Visit L.J. online at http://www.lj-garland.com.
Debbie Gould ~ Born in Wichita Falls, Texas, at the age of two Debbie Gould and her mother moved to New Jersey, spending many happy years on her grandparents’ horse farm. You’ll sometimes find this setting as a backdrop in her work.
As a teenager, she and her mother found a new home in Vermont, where she currently resides. With a daughter in the Air Force (along with Debbie’s six-year-old grandson), and two sons working for the family Well Drilling business, Debbie Gould now shuffles her time between a husband, full time job as a nurse and her writing career.
About seven years ago, while looking at over three hundred treasured books lining her shelves, she realized there was a multitude of stories of her own clamoring for release. Since then, she’s seriously persevered in keeping the keyboard in constant motion.
With three published books, Debbie is now working with a partner, L.J. Garland. Together, they have finished one manuscript, Sins of the Mind.
Debbie has been a member of KOD, FTHRW, ELEMENTS and RWA Online.
Visit Debbie online at http://www.authordebbiegould.com.