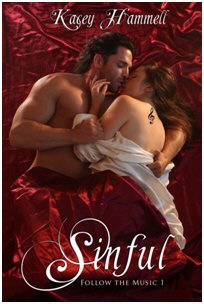 BLURB:
Music was their only dream & passion…
Until they found one another…

For years, Mikayla Gallan has dreamed of providing a better life for her younger brother, Matthew, and herself. Coming from a family of musicians, Mikayla and Matthew have dreams of someday making it big. But Mikayla’s first priority is always ensuring Matthew’s future. When Houdini Records comes knocking on her door, offering her everything she’s ever wanted, Mikayla’s scared to grab onto their offer.

Sinclair “Sin” Devlin, part-owner of Houdini Records has loved and lost and has no intentions of ever going down that path again. He’s determined to put his company back on the map and is willing to do whatever it takes to make it happen. Meeting Mikayla Gallan, hearing her sultry and passionate voice on stage, Sin believes he has found the only woman that could save the company. He’s even more shocked to realize that perhaps she’s also the only woman to save him from himself.

I’ll be honest, the cover alone is worth the read.  Just kidding.  Actually, the premise of the series and Sin and his partner make the book worth reading again and now I have to wait for the next book.  I hate waiting by the way.

The book starts off with Mikayla waiting to sing at the bar that her parents worked in while she and her brother were growing up.  Sin and his partner are there to look for the singer that hopefully will put Houdini Records back on the map.  Sin is a songwriter that has had a devastating loss and that loss has left him emotionally unavailable.  He hasn’t written a song in 3 years and with Houdini Records needing him back in the fray, he agrees to audition one more singer for the label.

Mikayla has had to raise her brother on her own since the death of their parents.  All she wants is for her brother to be able to achieve his dreams in a songwriting contest that is going to be held in the U.S.  Cash she doesn’t have but she’s willing to listen to Houdini Records and what kind of offer they will make to her.  Little does she know that with the offer, dreams that she didn’t know she had will come true.

I loved this story.  It was fresh, sexy and current.  Who know that a torch singer with a song writing little brother would make it in the music business?  Mikayla was a woman that I would love to meet and be friends with.  She has done the best she can do with her brother but knows now that its time for him to fly but what happens to her?  She meets the sexiest man alive and within minutes of meeting each other the most wonderful thing happened to her.  That one scene in the book sealed its fate for me.  Wonderfully written scene and the dialogue was perfect.

I really felt for Sin and his predicament.  He was in a no win situation but he ended up winning in the end.  His business partner was a complete hoot and I’m really hoping that he gets his own book.  I think there is much more to him for readers to find out about.  Maybe Mikayla’s best friend?  His loss was awful but he got in return was much more.

The instantaneous chemistry between Sin and Mikayla was highly believable for me.  Sin had watched her sing all night long and was completely enchanted by her.  Mikayla needed a bit more convincing but ultimately she came out a winner, too.

I highly recommend Sinful, for the beautiful writing, sensual scenes between Sin and Mikayla and an ending that had me crying happy tears.

BUY LINKS:
Amazon | aRe | Barnes & Noble (Nook)  | Smashwords| Bookstrand
ABOUT THE AUTHOR:
Canadian-born author, Kacey Hammell is a self-proclaimed book-a-holic, who began reading romances at a young age and became easily addicted.  As a Mom of three, Kacey has made certain that each of her children know the value of the written word and the adventures they could escape on by becoming book-a-holics in their own right.
A decade ago, while working for multiple review sites, Kacey quickly discovered that she was developing the writing bug. Thanks to the encouragement of her own beloved hero husband, she decided to try her hand at writing.
With a love of contemporary settings, modern day romances and the happily ever after, as well as the excitement of suspense, Kacey creates stories in genres she’s familiar with and that she loves most. She also loves vampires who nibble the necks of the heroines, ghosts who can’t leave a loved one, shape-shifters who are sexier than hell and the thought of her very own werewolf or were-cat to tame makes her tremble!
Readers can contact Kacey at kaceyhammell@gmail.com