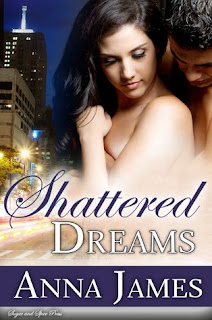 The second story in the Bradford Sisters Trilogy

Natalie and Reed seemed so happy when they got married just a few short months ago, but an unexpected pregnancy and a subsequent miscarriage throw their marriage into turmoil.

Natalie deals with the loss by burying herself in work. Reed is supportive but doesn’t understand why she is spending so much after-hours time with her handsome, sexy boss. And what about their dream of having a family? How can that happen when with each passing day Natalie becomes more distant?

Will Reed and Natalie find a way to work things out, or will all their dreams be shattered?

This book completely blew me out of the water.  This is the second Bradford Sisters book and it surpassed the first book with its emotional intensity and honest feelings around a subject that is considered taboo.  Miscarriages are hard, not just on the woman but also on the man.  Natalie deals with her feelings by working on a charity ball and ignoring Reed.  Reed doesn’t know how to deal with it and when Natalie shuts him out, it just gets worse.  Thinking that buying a lake house will spur something with Natalie; it backfires as she gets more and more involved with her work.  Plus, it doesn’t help matters when Reed re-hires an old assistant that had moved away.

Wow, just wow.  This book had me from the first page and never let go.  I read it in one sitting and waited a couple of days before I reviewed it.  I’m still thinking about it and yes, it still has a hold on me.  The subject matter alone is something that should be talked about.  The book starts off with Nat and Reed seemingly in love and in sync with each other.  Once the miscarriage happens, the marriage seems to be on the rocks.  While Reed is supportive at first, the long hours, dinners and ultimately the pictures that are taken between Natalie and her boss are more than Reed can take.  When confronted with the photos, Natalie retreats further into her work and defends it.  Meanwhile, Reed is fighting off a very amorous assistant that has her sights on Reed.  She has been in love with Reed since the first time she worked for him.

The ending is perfect.  While this is the second book in a series, it does stand alone.  I do, however, recommend that you read Guilty as Charged which is Nicole’s story.  It only enhances Shattered Dreams and you get to visit old characters to see what has happened to them.

Ms. James has written a series that is tough to put down.  She writes with an emotional intensity that is felt when you open the book and it doesn’t let go.  Ms. James takes a taboo topic and brings it to the forefront and begs you to talk about it.  I wait impatiently for the third and final book of the series.