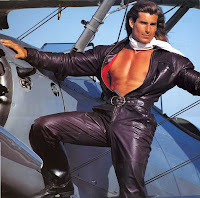 One of the things that I hear over and over from my readers is they wish they could meet a man like hero xxx in real life, or that they wished their husband or boyfriend acted like a romance god. A man who would fulfill their deepest desires, a man who manages to have 2% body fat and can lift 400 lbs without ever having been in a gym. Oh, and most importantly, he must be sexually psychic and know what you want before you even know it. You know, the kind of guy you see all over the place. 😉
I try to tell them, especially the ones in committed relationships with good men, that they can have a man like that in their life. Here’s the thing…men want to be our romance sex gods. They want to sweep us off our feet, make us see stars, and give us the best orgasms that the human species has ever seen. But they can’t do it without a little bravery on our part.
See, many women are too embarrassed to talk about sex with their lover. Which is kinda odd when you think about it, you trust them enough to invite them into your bed but you don’t trust them enough to tell them what you want them to do once in the bed. You can’t be disappointed that your husband didn’t tie you up and use nipple clamps when you’ve never, ever said a word about being even slightly curious about BDSM. He’s probably afraid that if he even mentioned it that you would freak out and he’d be sleeping on the couch for a week while you told all your friends and family what a horrible pervert he was.

Cut the poor guy a break. Give him a tinsey hint of what you want. If you can’t tell him to his face, send him a text/email/etc. Tell him that you think it would be really hot, really sexy, if he tried X Y Z with you. Tell him that it would turn you on like never before and you can’t wait for him to do it to you, or you to do it to him. 😉 Start out slow, introduce little things, before you know it you may be able to actually talk to him about it without passing out from embarrassment.
If you can find the strength to admit what you want, wonderful things will happen, just like they did for my leading lady, Erica, in Sensation Play. Erica is tired of boyfriends who won’t experiment with her and signs up with a dating service for a 1 night stand. Well, not just any 1 night stand, Erica wants a big, strong, dominant man to fake break into her hotel room and force her to have multiple orgasms. And boy does she get her wish, in spades, with Jonas. He…well I won’t ruin it for you but let’s just say he’s a master of sensual torture. 😉 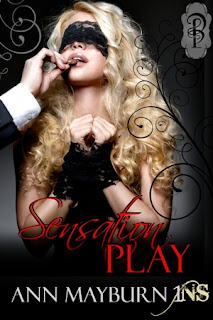 Thanks to Harlie for having me on your blog today, I hope you enjoyed Sensation Play!
*side note*  I totally agree with Ann’s post.  Most women are too scared or shy to tell their partner what they want from them.  Really?  Is this the Dark Ages?  I thought that with Sex in the City, Cosmo and the Internet that women had evolved?  I guess some of us are still living in the Dark Ages.  Trust me, I’ve been with my husband since 1999 and it wasn’t until we were married that I finally started to talk to him about what I wanted and its been great ever since.  Your partner might surprise you with what they want too.  Communication is the key in any relationship.  Don’t ever forget that.  *end side note*
Blurb:
Retired German cage fighter, Jonas Becker, has finally settled down in Las Vegas to open his own training center. A chance meeting with his dream woman at a charity ball leads him to hanging out at her favorite coffee shop where he overhears the perfect opportunity to win her over. One orgasm at a time.

Erica Alman is sick of her overprotective older brother’s ruining her love life, especially after they chased away that amazing mystery man that she had danced with a the charity ball six months ago. With the help of her best friend, she signs up with the 1 Night Stand dating service. Her request is simple. She wants a dangerous, rough man to fake break into her hotel room at the Castillo resort and force her to have multiple orgasms. Oh, and she wants the man to be big, bald, and have a German accent, just like Jonas.

Using every ounce of his skill as an experienced Dom, Jonas hopes to win Erica over before the night ends. He can only hope that the pleasure he can bring her will make the beautiful woman look past his scarred and battered exterior to the man within who can give her sensations like no other.

Review:
As a major fan of Decadent’s 1 Night Stand series, I jumped at the chance to read and review Ann Mayburn’s entry.  I had heard of Ann before and most people told me, “You will love her writing.  Her books are Awesome”.  She did not disappoint me in the least.  And I will be gobbling up her backlist.
When Erica and Jonas meet for the first time, Jonas fell hard but felt like he wasn’t worthy of someone like Erica.  Plus, it didn’t help that Erica comes from a family of way overprotective brother’s.  The brothers have decided that no one is good enough of their sister and put an end to any kind of relationship that Erica has with a man.  At this point in the book, I just wanted to smack the brother’s but I kinda had a feeling about one of them.  All Erica could see when she meets Jonas is someone that is strong yet gentle, sexy, dominant and mysterious.
Erica was a true spitfire and confident woman.  She knew what she wanted in a man and in the bedroom but getting past her brothers was another thing all together.  When she decides that enough is enough and signs up for Madame Eve’s service, its make or break time for her.  Her fantasy is to have someone break into her room and completely dominant her from the beginning.  Don’t worry…Ann handles what could have been a very taboo subject with a deft touch and grace.  Its role playing at its best.  You can feel the sexual tension build up from there and its just ratchets up.
Jonas knew that having a one night stand with Erica would never be enough for him.  He has loved her from the first time they meet.  In his eyes, he didn’t think that he handsome anymore with the scars and battle wounds that he had gotten over the years being a cage fighter.  His speciality in BDSM is sensation play and he plans on using everything that he has in his arsenal to bring Erica to heights that she never thought possible.  Trust me, I learned something new about sensation play in this book.  The “wheel” is quite intriguing and I can’t wait to see one for myself.
While this is a 1NS, the role playing, sensation play and sex were very well thought out and highly emotional.  BDSM stories can go so many different ways and Ann’s writing of the genre is vivid without being overly done and harsh.  I felt what Erica felt while reading and yes, a cold shower was needed.  When morning came and all was revealed between Jonas and Erica, I thought now that is a perfect HEA.  But wait, there is more, so much more.  I laughed and I cheered and shouted “Right on Sister”.  Trust me, you will know what I mean.
I highly recommend Sensation Play from Ann for a couple of reasons.  She handles a somewhat taboo sexual fantasy with grace and with a soft hand.  The inner dialogue from Jonas is priceless and I really felt for him and his feelings for Erica throughout the whole book.  And finally, the end scene with Erica and one of her brother’s is priceless and a prelude to maybe a sequel.  Please, pretty please?
5 Harlies and please read this series.  It is one of the most thought out, sexy, laugh out loud books that I have read in a long time.  And I hope that Ann doesn’t mind that I found parts that were funny.
Where to find Ann in cyberspace:
Website     Facebook    Twitter