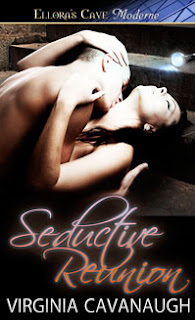 It should have been a simple evening. Go to the high school reunion. Have a couple of drinks. Share a few laughs. Easy peasy. Until Special Agent John Clayton walks in and turns Andi Morgan’s life upside down.
He makes her want things…deliciously wicked things. But Andi’s past complicates matters. Her ex-husband—and local senator’s son—Steve Hidel is in deep shit with the Havenk brothers, a shady pair of gunrunners, and they all want something only Andi can give them. Andi wants to trust the safety she finds in John’s arms, but she soon discovers he might have ulterior motives of his own.
Review:
What a delicious novella.  I read it in one sitting.  Who doesn’t have reservations about going to their high school reunion?  I’ve already done the 10th and 20th class reunions.  I don’t regret going to either one of them.  I had a blast.  Of course I was married and a mom by the time I went to my 20th.

Andi’s life has dramatic changed since high school.  She married her high school sweetheart Steve.  The marriage started off well but changed for the worse within a few years.  Feeling strong enough to divorce him, she moved on with her life.  With the encouragement of her best friend, she decides to go to the reunion.  She didn’t expect for the geek that sat behind her in class to be all grown up and hot.  Too bad, she didn’t remember him at a first.

John Clayton moved to town to finish out his senior year in high school.  Sitting behind Andi in a class, he developed a major crush on her.  Going back to the high school reunion was more of an afterthought until he spots her and decides its now or never with her.  I love a man that decides to go for it with one look.

This story moved at a fast pace and flowed along quite nicely.  The attraction between Andi and John was hot from the get go.  Their attraction to each other didn’t seem forced or thrown together.  The go-cart scene was hilarious.  I completely understood Andi’s reservations with getting involved with John.  Not quite divorced and having to deal with an soon to be ex still butting into her life would through a wrench in trying to move on.

The suspense element that is woven into the story was fresh and didn’t overtake the main storyline.  The final climatic scene was very well written.  I felt like I was there and it was heart pounding.  Great job Virginia!

I look forward to reading more from Ms. Cavanaugh in the future.

5 Harlie’s and a recommend read