This post is part of a virtual book tour organized by Goddess Fish Promotions. M. Naidoo will be awarding a $15 Amazon or B/N GC to a randomly drawn winner via rafflecopter during the tour. Click on the tour banner to see the other stops on the tour. 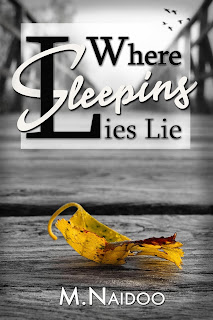 If Anna had only known how the simple push of a button would turn her life upside down, she would never have pressed ‘Play.’

Just 22 seconds into the recording she’s hit by the realization that, if the voice in the thick German accent is right, she has been living with an unthinkable lie for the past thirty years.

There is only one way to find out: Follow the instruction left by a dead person and head back to Germany, to a life Anna has next to no conscious memory of.

To her surprise, she finds an unexpected ally in Peter, an old childhood friend whose law degree and language skills prove to be more than useful. Besides, he has the most gorgeous blue eyes and the uncanny ability to push Anna’s buttons without the slightest effort. At every turn, their search for answers is littered with more lies and revelations.

Anna must ultimately decide whether even the noblest of ends, truly justify the means and whether some secrets should better stay buried.

“Mystery, history, and a twist at every turn. Brilliant characters and prolific storytelling… irresistible!”

“God, I can’t even imagine.” The weight of what Martha had lived through had made Anna feel queasy. She needed water.

She hadn’t noticed how Peter was leaning forward, rubbing the back of his head, or how his voice had taken on a frigid undertone.

“Losing a child? I mean how do you get up in the morning?” Anna picked up her glass from the table.

“You don’t—not for a long time.” Anna froze. As she turned to look at Peter, his eyes, blank and dark, were fixed onto the candleholder in the center of the coffee table. She let herself fall back onto the sofa under the weight of the realization.

“When?” As if it would make a difference how much time had gone by.

“Nine years ago, in August.” He turned his head to look at her. Anna didn’t know what to say. What could she say?

“Her name was Sophie, the happiest, smartest, funniest, most loving three-year-old you will ever meet. One minute she’s running and laughing, the next she’s hooked up to machines with doctors telling you she won’t ever wake up again.” The pain she had felt in his voice had turned to bitterness.

“Sorry for my loss?” He finished her sentence. “That’s what they all said, doctors, nurses, family, friends… everyone.”

“What else were they going to say?”

“Nothing. Because there wasn’t anything, anyone could say that would have brought her back. Words were just a waste of time.”

“What about her mom?” Anna couldn’t help but ask.

“Gone.” He paused. “Without Sophie… we couldn’t pick up the pieces.”

Harlie did a thing.  She read a historical fiction book and will review it on the blog.  There is a touch of romance but it is very little.  What this book is a wonderful historical fiction book set during World War II and secrets that could make or break a family apart.  Let me tell you some of the things that I really liked about it.

So there you have it.  Harlie did a thing and she is a very happy girl because of it.  I will tell you that there are some intense parts to the book in Martha’s time but that is to be expected.  I’m sure that I missed some small details in my first reading so I will definitely re-read this one again.  Yes, it was that good.

About the Author:  M.Naidoo lives in Northern California with her husband, two daughters, and three dogs. Born and raised in Germany, she was able to draw on a wealth of memories and passed down stories for Where Sleeping Lies Lie.

When she is not in front of her computer, pounding out storylines and characters, she enjoys reading, movies, spending time with her family, and long walks on the beach – her proverbial ‘happy place’. M’s love for the shoreline and ocean shine through in the vivid descriptions of the coast in her debut novel The Pelican.

“Juggling my life as a writer and a full-time ‘real’ job has its challenges. I don’t get to spend half as much time as I’d like doing what I love, and there are never enough hours in the day. Still, I feel extremely lucky to be following my passion, and I am enjoying every minute of it. Getting here has been one heck of a ride!”

For information about the author, her blog, upcoming releases, and more visit http://www.mnaidoo.com.