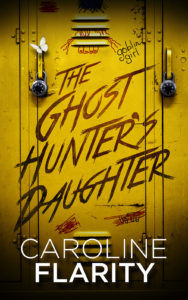 Sixteen-year-old Anna sees things from another world, the spiritual world, a skill that isn’t exactly useful in high school. It’s bad enough that her mother, possessed by a demon, took her own life when Anna was a child, a loss she remains tortured by. Now her father makes his living “clearing” haunted objects, and Anna’s job as his assistant makes her a social misfit. Most kids in her suburban New Jersey town refer to her just as “Goblin Girl.”

Only Freddy and Dor remain loyal friends. But Anna’s so focused on her own problems, she’s missed that her connection with Freddy is moving beyond the friend zone.

As junior year approaches, a rare solar storm lights up the night skies and the citizens of Bloomtown begin to act strangely: Anna’s teachers lash out, her best friends withdraw, and the school bullies go from mean to murderous. When Anna realizes she can harness this evil power, she sets out to save Bloomtown and the only family she has left.

But to do so, she must keep her own increasingly dark urges at bay.

Anna continued the staring contest with herself until the current of connection became so strong that she couldn’t look away from the mirror even if she wanted to. And then the details of the yellow flecks around her pupil—the golden starbursts in the hazel of her irises—suddenly grew sharper in the glass, crystallizing. Every muscle in her body tightened. Something was going to happen.

At first Anna thought she was shaking with fear, and then she was sure that a bee had flown into her mouth. Her jaw clenched instinctually, biting down. She braced for the soft crunch and searing sting that was sure to follow, but her teeth met without resistance. There wasn’t a bee, but her teeth continued to rattle as an electric thrumming spread throughout her body. Was this another portal attack? Anna wasn’t sure, but it was a vastly different sensation from the river rage—a much faster and higher-pitched vibration. She waited with dread for the shaking to slow and deepen, for the waves of hatred and misery to roll through her. But the vibration inside her increased in tempo, intensity and pressure.

It was like being in an airplane right before the wheels lifted off the ground—all that power. She was vibrating at a body-numbing, incredibly high rate, but was somehow still at the same time, like a tuning fork. It had been a mistake to try this in her room. What if the mirror gazing had opened her up even more to the destructive power of the portal spew? There was something familiar about it, the growing roar in her ears, but she braced herself and resisted with all her strength. No.

Oh my gosh.  This book was phenomenal.  Just phenomenal.  And yes, I don’t read this genre at all.  What drew me in to read it was Anna herself.  Ms. Flarity as created a teenage character that I couldn’t get enough of.  Like, I could read a whole series of books with Anna has the central character.  Anna is a typical teenager, dealing with bullying, the loss of a parent, a father that hoards and is absent and two friends that are the glue that keeps her together.  Of course, Freddy could be a potential boyfriend but that’s for another time.  She has a town to save.

Once you get past the first couple of pages in the book, you are completely sucked in.  Yes, sucked in.  I read it in one sitting.  Fast-paced, but detailed.  The world that is created here makes complete sense and is fascinating.  Sure, its Jersey but the paranormal world is what I’m talking about.  It’s a setting all its own.  I loved how Ms. Flarity describes this world.  From the portals to the demon, to the objects that Anna’s dad kept.  Ms. Flarity definitely knows how to write creepy and it is so good.

There is a lot going on in the book so you need to pay attention at times.  The supernatural world has a bunch going on and if you decide to skip even a paragraph, you will be lost.  There are mean girls and a wannabe rockstar to deal with, too.  Not to mention a certain teacher that will make your skin crawl.  One of the more endearing characters is the new assistant that Anna’s dad hires.  She is exactly what Anna needs to find her inner strength to fight off the demon in the end.  The climax to the book is AWESOME!  Brilliantly creepy, brilliantly written and just all around wonderful.  Anna shows so much growth in those final scenes.

If you are looking for a creepy, paranormal/supernatural young adult novel with a lead character that could live next door to you, family issues that are too real, friendships at times that are tested and finding your inner strength, this book is for you.  One of the best books that I have read this year.

Oh…did I mention that it is a DEBUT? 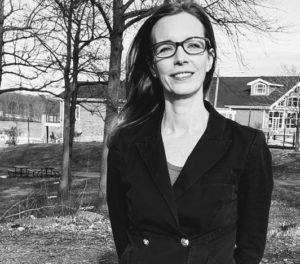 Caroline Flarity is a web content producer living in NYC. Her fascination with fringe topics and love of scary movies led her to begin her writing journey penning creepy screenplays. Her debut novel THE GHOST HUNTER’S DAUGHTER started life as a feature script, placing in the finals of the StoryPros Awards and as a semifinalist in Slamdance Film Festival’s writing competition. She enjoys pitting her characters against both supernatural and cultural evils.

Caroline Flarity will be awarding a $50 Amazon or Barnes and Noble GC to a randomly drawn winner via rafflecopter during the tour.