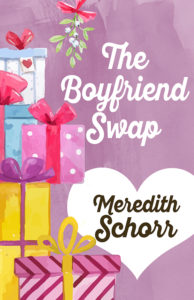 Is Christmas really the most wonderful time of the year? New Yorkers Robyn Lane and Sidney Bellows aren’t so sure. Robyn has always dated struggling creative types. For once, her parents would love her to bring someone with health insurance and a 401(k) to their Chrismukkah celebration. Her actor boyfriend doesn’t qualify. While across town, Sidney’s professional life already belongs to her parents. She’s an attorney at her father’s law firm and she works tirelessly to keep her love life private. If she brings her lawyer boyfriend to their annual Christmas extravaganza, her parents will have the wedding planned by New Year’s Eve.

A mutual friend playfully suggests they trade boyfriends for the holidays. The women share a laugh, but after copious amounts of wine, decide The Boyfriend Swap could be the perfect solution. This way, Robyn can show off her stable attorney boyfriend and Sidney’s high-society family will take no interest in her flaky actor beau.

It’s a brilliant plan—in theory. In practice—not so much. When Will turns out to be the boy-next-door Robyn crushed on hard throughout her teenage years, and Sidney’s family fawns all over Perry like he’s an Oscar-winner rather than a D-list wannabe, one thing is certain: The Boyfriend Swap might just change their lives forever.

“Give the idea a minute to percolate,” Sidney said calmly. Her mouth remained in a straight line, indicating she wasn’t joking.

My stomach quivered with unease, but I took calming breaths to settle down. According to Anne Marie, Sidney was very opinionated and sometimes wouldn’t shut up until she got her way. I’d just let her keep at it until her throat hurt or she passed out from too much wine.

Sidney continued, “If left to our own devices, the holidays are going to blow chunks, but if we pool together, we’ll all be better off. And it’s only for a few days. It’s the perfect solution to our mutual problem.”

I stood from the table and removed a bottle of water from the refrigerator. I poured a glass and placed it in front of her. Hopefully she’d take the hint. The wine was clearly going to her head.

“What do you say?” she asked the minute I sat back down.

The girl had to be on more than fermented grape juice. Hallucinogenics maybe? Whatever influence she was under, she clearly believed her ludicrous plan had merit and I was going to have to put my foot down. “I say that I’m a grown woman and shouldn’t need to lie to my parents about who I’m dating.”

Sidney nodded. “I agree. You shouldn’t.”

A breeze of relief zipped through my core. “Glad we’re on the same page.”

“You shouldn’t have to lie, but in our case, we sort of do. If we want to make it to the New Year without requiring a straitjacket, that is.” She smiled, a slick grin I was certain both assured her clients and put the fear of the devil in her adversaries in equal measure.

Where do I start with this gem of a book?  Seriously?  The premise sounded like a true winner and it really was.  I loved Robyn, Perry, Will, and Sidney.  But I did have my favorites.  Anna Marie is a hoot, too but I’ll get more into the secondary characters later.  What truly sets this book apart from any other chick lit/rom-com is that its clean.  I know, right?  I’ve read some really good rom com’s lately but this one is clean.  Sure, sure, the couples before the swap engage in the bedroom but we never see it and its only in passing do we even hear about.  Your’ grandmother can read this book or even better a teenager.  Did I miss it?  Nope, not one bit and you won’t either.  This is a story about two couples that need to grow up, figure out what they want in life and how they are going to achieve it.  With or without their current partner.

Robyn and Will stand out for me because of the trope, childhood friends to lovers.  Robyn and Will have a chemistry that is just there on the edge but neither one of them want to step off.  Robyn has had it in her head about Will since she was a teen and doesn’t want to spoil that image or fantasy.  Will, on the other hand, just to figure out if Sidney is the right woman for him.  You will cheer this couple on from the beginning.  I loved these two and their romance is a slow build with a broken heart or two.  I won’t go into anymore because of spoilers.  Let’s just say that I’m very satisfied how it…

Sidney and Perry are a completely different story.  If I had to pick the couple that needs the most work, it would be them.  Take an alpha female with severe daddy issues and pair her with a wannbe actor and its a recipe for diasater.  I never laughed so hard at them.  Perry is trying to shake her up and boy does he.  Sidney doesn’t know what to do and the pantry scene is priceless.  I saw it coming but I still loved it.  It finally showed a Sidney that I liked.  I didn’t like her very much until then.  She’s got a bunch of issues to deal with and when she FINALLY tells her dad “sorta” off, I cheered for her.  If I had one compliant, I would have liked to see where she and Perry ended up.  The scene at Lord & Taylor is just too funny.  Cherry Bomb!

Both girls have family issues that they need to take of in the book and with the help of their ‘boyfriends”, they succed on some level.  Peeps, this book is chopped full of laughs, two couples that shouldn’t be together but are and some major growing up for the girls.  Ms. Schorr has written a winner of a book.  I highly recommend it.  Plus, it has Lord & Taylor.  I know, I live in Texas but we had L & T in Dallas when I was growing up.  I used to get my hair cut there and my first ever Victor Costa party dress was bought there.  And yes, I still have the dress.  😉

I can’t wait to read another book from Ms. Schorr.  I loved her voice, style and most of her characters.  Anna Marie and both sides of the family are great, too.  James is a hoot for Robyn to sound off to and the two guys at the beach were priceless.  Pick this book up.  Tell your friends.  And then tell what book of hers next to read.

A born-and-bred New Yorker, Meredith Schorr discovered her passion for writing when she began to enjoy drafting work-related emails way more than she was probably supposed to. After trying her hand penning children’s stories and blogging her personal experiences, Meredith found her calling writing romantic comedy and humorous women’s fiction. She secures much inspiration from her day job as a hardworking trademark paralegal and her still-single (but looking) status. Meredith is a loyal New York Yankees fan, an avid runner, and an unashamed television addict. To learn more, visit her at www.meredithschorr.com.

Meredith will be awarding a $10 Amazon or B/N GC to a randomly drawn winner via rafflecopter during the tour.