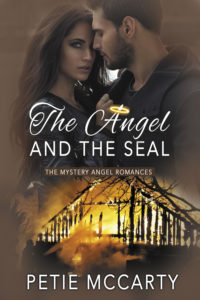 The Angel and the SEAL

The Angel and the SEAL . . . a cozy mystery with romantic suspense from the Mystery Angel Romances series. An angel hidden in every book waiting for you to figure out who . . .

Foreclosure looms for Cory Rigatero as she fights to keep her rustic resort near Mt. St. Helens afloat after her brother deserted her to join the SEAL Teams. Cory’s whole world dives into a tailspin when Sean MacKay shows up at her resort with the news of her brother’s death and the wild suspicion her brother may have sent her traitorous classified documents. No way will Cory trust MacKay — the man who once seduced her and then vanished into the night without a trace.

A scream ripped through the air.

Mac jerked his head up in time to see the end of the dock collapse—with Cory in the middle of it—and Vern streaking for the water. The black Lab galloped out of the rear garden, barking his fool head off.

Mac vaulted from the tractor and had his feet under him before he grabbed his next breath. Panic put wings to his feet. Cory hadn’t bobbed up by the time Vern reached the collapsed end of the dock. The old man disappeared beneath the surface, and Garth perched at the end of the sagging dock, barking his complaints.

Dear God, not Cory. Don’t let anything happen to my Cory.

Mac’s feet left the lakeshore on a dead run, and he sliced into the water, stroking before he completely submerged. A handful of power strokes and he reached the spot where Vern had gone down. Mac dove under to find the old man red-faced and struggling to hold his breath while he heaved on a dock piling that had toppled over and pinned Cory’s legs to the lake bottom. In the crystal-clear water, Vern’s eyes had gone wide with fright. Cory monitored his approach but lay limp and had ceased to struggle.

Two dock boards remained pinned to the collapsed piling and framed her lithe body like the sides of a coffin. He stroked to her side, put his shoulder under the closest dock board, and prayed it would hold tight to the piling as Mac pressed upward with all his might. Thank God, Vern saw what he intended, and though short on air himself, the old caretaker scooted around and tugged Cory free from beneath the piling.

Mac waited until they were well and clear before he dropped the mass to the lake bottom. His heart jolted hard when he saw Vern go limp. He had nothing left.

Mac wrapped one arm around the caretaker and the other around Cory and pushed hard for the surface, thankfully but a few feet up. Mac managed to hold both their heads above water and kicked hard for shore. Garth howled and whined as he paced the length of what remained of the collapsed dock. Mac dragged both bodies up and out of the water the minute his feet found purchase on the lake bottom, then he laid them both out on the sandy shore. Vern rolled to his knees and began to cough and hack.

Mac crouched over Cory lying limply on her side, her eyes closed. He detected a weak heartbeat when he laid two fingers to her throat and leaned his cheek close to check for breathing. Hearing only his own labored breathing, he tugged her chin down with a thumb and stuck a finger into her mouth, intent on clearing an air passage.

Teeth clamped hard on his finger.

“Yeow!” He managed to yank the entire digit free.

“Well, get our finger out of my mouth,” Cory huffed and struggled to sit up. “What are you doing?”

“I was just spent, not dead. I used up everything I had struggling to get free of the piling.”

Before she could lodge another complaint, Mac dragged her to his chest and held her as though he’d never let her go.

Oh my.  I’ve been reading Ms. McCarty for a while now, I will have to say that this is her best book.  Why?  It is chopped full of suspense, action, romance and it deals with what constitutes a family when you feel like you have no one left.

Mac and Cory have a second chance at romance when things go south with her brother but the miscommunication between them, the mixed signals and basically not have a true sense of faith between them almost lets them NOT have that second chance.  Ms. McCarty wrote them with such emotional depth that at times, I wanted to smack both of them for their lack of trust in each other.  Oh, it led to some somewhat hilarious dialogue but once the dust settles, these two just need to sit down and actually talk to each other and not assume about the other.

Mac found his family with the SEALs and particularly with Brian, Cory’s brother.  What he didn’t expect was how badly their dad didn’t want Mac near Cory because of his childhood.  That nearly broke me about his childhood but it also made him realize that he could have a family with Cory and lodge family in the end.  He didn’t need the SEALs anymore but they needed him.  He found Cory again and wasn’t going to let go.

Cory could be extremely stubborn when it came to Mac.  At times, I wanted to smack her more than Mac.  She only reacted to Mac throughout the book without asking the key questions and only assumed on her part.  On the other hand, she is very loyal to her employees and almost too strong for her own good.  Her conversations with Senior were great.  She didn’t take much off of him and let him know it.  She just didn’t do that with Mac as much.

The suspense plot in the book is amazing.  There is always something going on.  Sabotage on the resort and the two goons that are after her for whatever they think Brian left her.  I’m telling you…its nonstop with the action.  Ms. McCarty has done her homework with it and it shows.  The mystery part is spot on, too.  I NEVER figured it out.  Like, seriously.  Never.  Plus, like the book says, there is always an angel and I didn’t figure that one out either.  In fact, I’m still in shock over the angel.  Part of the mystery deals with the Mafia.  Oh yes, old school Mafia.

I have really enjoyed this series by Ms. McCarty.  Its a sweet romance series with mystery and suspense.  I never know how it is going to end up or who the angel is but it doesn’t matter.  I can count on her for an exciting, emotional and a mystery/suspense tale that leaves me satisfied and looking forward to the next one. 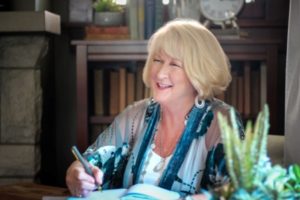 Petie McCarty will be awarding a $10 Amazon or Barnes and Noble GC to a randomly drawn winner via rafflecopter during the tour.

7 thoughts on “#Review of The Angel and the SEAL (the Mystery Angel Romances #3) by Petie McCarty w/a rafflecopter giveaway! #romanticsuspense @authorpetie”