This post is part of a virtual book tour organized by Goddess Fish Promotions. L.E. Rico will be awarding a $15 Amazon or Barnes and Noble GC to a randomly drawn winner via rafflecopter during the tour. Click on the tour banner to see the other stops on the tour. 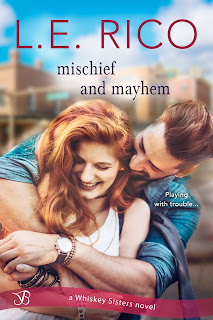 Welcome to Mayhem, Minnesota, home of the Knitty Kitty, The Little Slice of Heaven Pie Shop, and O’Halloran’s Pub—owned by the four young women known as The Whiskey Sisters.

In the wake of her divorce, Jameson O’Halloran has gone man-vegan. And this is one diet she’s determined to stick with. Even when her long-lost ex-brother-in-law shows up looking like two scoops of double dutch dipped in chocolate… She’s not giving in. Been there and still wearing the messy T-shirt.

It’s been a decade since Scott Clarke left his family and his hometown, never to return. But when tragedy strikes, he finds himself dragged back to the land of gossip, judgment, and the one woman he absolutely, positively, without a doubt can never have. His brother’s ex is off-limits. He just needs to keep repeating that to himself until it sinks in.

The shelf is a little too high for my short self, and I’m only able to brush the dishes with my fingertips.

Before I can object, he’s standing behind me, reaching over me to get the dishes. For a brief second, his front is pressed against my back. His broad, muscled, perfectly sculpted front. I feel a wave of unwelcome warmth beginning under my collar and creeping up my neck.

“Thanks…” I murmur awkwardly, keeping my back to him for a moment longer in an attempt to quash my blush.

“Okay. I’m just going to grab a shower before my brother gets here, if you don’t mind.”

Once he disappears around the corner, I silently smack my palm to my forehead.
What was that, Jameson? Why the blush? He’s just your ex-husband’s brother, that’s all. This is insane. I’ve got to stop this childish behavior. No. More. Men. Remember? No thinking about men. No looking at men. No fantasizing about men.

Especially not that man!

I’m still shaking my head and silently berating myself when I hear him behind me.

“Hey, Jameson, do you happen to know if my dad keeps an extra toothbrush around? I dropped mine in the toilet and…”

I don’t hear the end of his sentence because, when I turn to face him, I suddenly can’t hear anything. I’m too entranced by the sight of him wearing nothing but a towel around his waist.

Where do I start?  I mean really.  It’s like I waited FOREVER for this book in the series.  If you want a recap of my review of Henny’s story here you go: Hennessey’s Review.  So I won’t go into the sisters again in my review but let’s just say that they all play a very big part of this book and it is wonderful how Ms. Rico is able to use them in nonintrusive ways.  Bailey and Jameson’s side plot is brilliantly played out, even if my heart broke a bit.  Very realistically written and heartfelt.  Remember that Jameson is the oldest and Bailey the youngest.

Anyways, I’m here to tell you how much I just ADORED this book.  In some ways, it supersedes the first one and I’ll tell you why:

Ms. Rico has written that rare second book in a series that really makes you think.  I’m not sure if I could have coped with what Scott went through all those years ago.  Jameson had to finally get her backbone when it came to Win and his ways.  Douchebag.  Yes, I will continue to say it.  It’s still a story about sisters but in the end, it’s about being true to yourself and fighting for what you truly want in life. 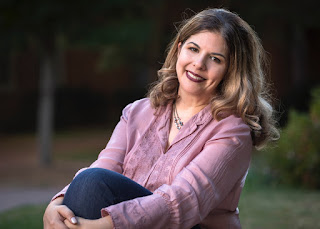 L.E. Rico didn’t set out to be an author. In fact she’s made a name for herself as a classical music radio host—doing her best to make the music and the composers relevant by putting them into a modern context. It was just a few years ago that she discovered a passion for writing that blossomed into an entire novel. And then another. And another. And, while she still spends plenty of time on the radio, telling the stories of the great composers, she spends even more time composing her own great stories.

Name the Nanny Contest
In addition to the tour wide Rafflecopter, the author is offering an additional special contest: “Name the Nanny!”

Create a quirky character and they could be featured in Lauren’s next book!
Contest page link: http://www.LaurenRico.com/Name-The-Nanny-Contest

A Note From the Author:

Name Mayhem, Minnesota’s newest resident!
Welcome to Mayhem, MN where the cats wear sweaters, the priest gives love advice, and you can find your fortune under a slice of pie.

Mayhem is filled with all kinds of quirky characters and I’m looking for one more!

In honor of the release of Mischief and Mayhem, book two of the Whiskey Sisters series, I’m in the market for a brand new character—a nanny who will fit in with the wacky bunch who live there.

Fill out this form and tell me about the nanny YOU think should become Mayhem’s latest resident! Name, physical features, and, most importantly, what makes them so quirky? Bonus points for snippets in the character’s voice and dialogue with existing characters from book one, Blame it on the Bet.

If your character is selected, he/she will be featured in an upcoming Whiskey Sisters storyline and you’ll get a shout-out in the acknowledgements!

All entries will be evaluated by myself in consultation with Entangled Publishing, LLC.

In the event that there are an insufficient number of viable entries, as determined by me, then I’ll create an assortment of characters—one to be chosen by popular vote with all voters entered in a random drawing. In this event, the winner will help select the character’s name & physical description and will receive a mention in the acknowledgments.

Haven’t read Blame it on the Bet yet? What are you waiting for?  Start getting acquainted with the Mayhem of Mayhem, Minnesota!