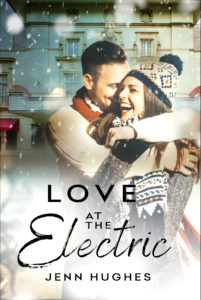 Love at the Electric

Walking wildfire Sam Owens gets Lillian hot in all the right ways, but there’s more to the software CEO than just a pretty face. And a great body. And… Oh, right. He’s the enemy, according to the contract she signed with his rival. So when they secretly meet up for movies at The Electric, Lillian can’t get too involved with Sam. She could lose her job. Her reputation. And her heart.

Sam is in love with his company, his image, his video games, and his ability to avoid commitment–at least until he levels up with attorney Lillian Walker. With her love of campy horror flicks and a body that makes him want to howl like a cartoon wolf, Sam’s found his leading lady. Too bad getting close to Lillian means tangling with her boss, a supervillain in the making.

In the nights leading up to Christmas, movies at The Electric mean more than just mutant toads and cannibal fruitcakes. Between shenanigans with old flames and an arch nemesis out to destroy any future they might have, Sam and Lillian learn the hard way that falling in love isn’t as easy as it looks on screen. When the past gets in the way of a perfect “the end,” there’s really only one solution–if werewolf Santas can bring them together, zombie ex-girlfriends can keep them together.

After all, anything’s possible at The Electric.

Lillian had wounded his pride like an arrow in an ogre’s soft underbelly. She’d called him a cover boy. Like he was in a boy band, and not the CEO of Origin, the best software and tech development company in the country. Scratch that—world. And despite that fact, she had yet to flirt with or flatter him…

When he looked at Lillian, hot cocoa came to mind. Not helpful in the slightest, except for the affirmation he was probably in the midst of a coronary and his brain starved of oxygen.

“Don’t panic. I was joking. It wasn’t intimate at all. It was six months ago, and we only shook hands,” she reassured him.

It didn’t help. Sam couldn’t even remember where they’d shook hands. He pressed his lips together and felt his eyes bug out like Panic Pete. Lillian groaned melodramatically and then laughed.

White hot rage coursed through Sam. The mere mention of Preston Lavery was as good as a cold shower. He slid his hand below the tabletop and hid his clenched fist, pressing it down into the vinyl seat.

“Well, that explains why Rik didn’t elaborate on you any more than he did. You’re the enemy.”

Wooza.  I know that I’ve recommended the last couple of books that I’ve read, but this one is definitely high on the keeper shelf for me.  It has everything that I love about a romance.  Older characters, nerdiness, small town, a villain to truly hate, and a very satisfying ending.  That said, there were some things that bugged me and I’m hoping that in the next book they are answered.  And yes, its part of the overall plot arc of the series.

Here’s the good stuff about the book.  Sam and Lillian.  They are some of the more mature characters that I’ve read in a long time.  In fact, Sam is actually younger than Lillian and both of them are past 35.  *swoon*  I really connecting with Lillian on a deeper level.  I was in my late 30’s when I finally fell in love and had to decide what was more important.  Love or a job?  It’s not an easy decision considering that is how everyone around you looks at you.  It’s rather annoying but once you get to know Lillian, you will understand.  Sam is just a man-child projecting an image that he THINKS most people want to see.  When they finally bring down their walls, they finally figure out what is most important.  Their romance is funny, emotional, realistic, intelligent and charming.

These two were such an awesome couple.  They had me at the moment they met.  Now, of course, Rik was there and I never connected with him and I really wanted someone to slap him…hard.  I didn’t like him as a lawyer, a person and I couldn’t believe the relationship between he and Lillian back in the day.  But enough about him and his issues.  This is Lillian and Sam’s book and Ms. Hughes makes sure that the focus is on them and no one else.  The secondary characters are not intrusive but at th,e same time the only two that I really liked are Ravi and Tessa.  I’d love to read more about them in future.

Here’s what I need a bit more closure on:  Preston, the villain.  Yes, we get something about the relationship between Sam and Preston but the bombshell at the end by Rik needs to be explored.  I would just love for Lillian to go no hold barred on him and then finally, he would realize that his father can’t bail him out.  But I’ve said too much.  You just need to read this book.

Overall, this is just about my favorite book of the year.  I can’t wait to read the next book in this series.

Jenn Hughes writes romance with a heavy dose of humor. A lifelong love of all things sci-fi, combined with her day job in marketing, IT, and graphic design, infuses her writing with tech-centric and geeky references.

When not reading and writing, she enjoys spending time with her family and gardening at her home in North Carolina. You might also find her gaming, repairing computers and electronics, experimenting with mixed media art, or finishing furniture.

You can find her online at:

Jenn Hughes will be awarding a $50 Amazon or Barnes and Noble GC to a randomly drawn winner via rafflecopter during the tour.

7 thoughts on “#Review of Love at the Electric (a Port Bristol novel #1) by Jenn Hughes w/a rafflecopter giveaway! #contemporaryromance”