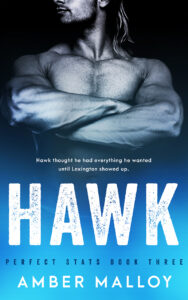 Hawk thought he had everything he wanted until Lexington Waters showed up. That’s when he discovered he needed so much more.

Tech Guru Lexi Waters needs to snatch her company out of the grasp of her greedy ex-husband. The only problem is the restraining order that keeps her away from the business she built from the ground up. With no money left to her name, Lexi is forced to go back to Chicago and face the first man to ever let her down—blues legend Sugarfoot Moe Waters, her father. While she’s stuck fixing up his crappy bar, the last thing she needs to deal with is a pushy, arrogant professional hockey player—Hawthorne Maze, aka Hawk. Hopefully, the gorgeous distraction won’t derail everything she has worked so hard for.

From the outside looking in, Hawk’s life seems perfect. Professionally, he’s at the top of his field, and personally, he has his pick of any groupie. Orphaned by teenage parents, he only knows is that his mom is white and his dad black. Other than that, there are only two people he considers family—his childhood friend Gavin Knox and geriatric bar owner Moe. He thinks he knows everything about the famous blues artist, but the sudden appearance of his hot-ass daughter is not only unexpected but also unwanted. Contemplating retirement, Hawk needs to figure out what to do next, but fate keeps throwing the sexy egghead Lexi in his path.

Who’s on a first-name basis with their parents?”

Lexi’s head jerked up to find problem number two in her crosshairs. Hawk leaned against the doorway, shooting her a lazy smirk she’d fought hard to ignore the entire day.

“That sounds like a question for Moe.” She trained her face into a blank slate, devoid of emotion. Lexi wished she could say the tech world had taught her that trick, but unfortunately that particular talent was a holdover from her shitty marriage.

“It’s just curious I’ve worked here for a few years and haven’t seen you, not once?”

As Hawk graced her with a lopsided smile, bright specks of brown and green twinkled in his hazel eyes. Similar to a bad kid, mischief was written all over his pretty mug. Maybe in another life she would have played with him, but unfortunately, Josh had stomped out any sort of good humor. “That is another question for Moe. So far you’re batting a thousand.”

“Well, let me hit you with one that you can answer.” He pushed off the door and brought a picture frame from behind him. “Why did you hide all this awesomeness in the stockroom?” Standing smack in the middle of the sexiest people she’d ever laid eyes on, the big guy held up a trophy.

“Ah, what sport is that?” she asked, completely in the dark.

Imagining the man spinning a graceful figure eight, she coughed into her hand, hiding her chuckle. “Correct me if I’m wrong, but Moe’s is a blues bar, right?”

“Got it. I’m no Louis Armstrong, but I’m a championship winner—and Chicago loves their winners.” Arrogant much? She bit her lower lip to stop all the smart remarks from flying out of her mouth. “Blues and hockey aren’t exactly peanut butter and jelly.”

“Point,” he sighed, evidently done with dispensing the charm.

“They don’t mix.” Lexi leaned back in her seat. “Honestly, these people probably think you’re just a really big bartender.”

Peeps, I’ve never read Ms. Malloy so I went into the story blind.  And yes, I knew that there were two other books in the series but I never felt lost when reading Hawk’s story.  In fact, you get to know Knox so well that you will definitely want to read his story.  I know I will be.

The story between Knox and Lexi is complex at best.  Sweet and funny, next and sexy last.  I know that it is labeled erotic but I just found it spicy.  So don’t let the label fool you.  There are plenty of smexy times but it doesn’t overpower the overall story.  Lexi and Hawk are dealing with some issues that I wouldn’t wish on my worst enemy.  Sure, Lexi dealing with her company issues was kinda standard and the fallout from her divorce but it’s her relationship with her dad that I felt was more emotional.  Moe is a great character and having to deal with some of the things that Lexi dealt with and had to come to grips with…I feel for you girl.

Hawk and all of his alphaness.  Plus, hockey.  Did I mention hockey?  Loved it and completely understood the end-of-a-career moments.  Plus, his sports buddies.  (I’m looking at you, Andre) At times, Andre had the best lines.  I really liked getting to know Hawk.  He was easy to like and honestly, one of the best heroes that I have had the pleasure of getting to know.  When he messed up, he did it well.  Like epically.  But that’s what made him more human to me.  Including his backstory.  Harsh as it was, in the end, everything was good.

If I had one complaint, was at times I really needed a scorecard to keep up with all the secondary characters.  Most of them were awesome and really moved the plot along.  Unfortunately, I would have to stop, look someone up to figure out what their role was.  The wives were AWESOME.  Everyone should have friends like that but I’m NOT playing dodgeball.  Thanks, but no.

I really enjoyed the book.  I would recommend it if you are looking for two somewhat lost people that didn’t want to fall in love with each other but did.  Plus, dealing with their own stuff and trying to build a relationship without killing each other.  It’s not an enemies-to-lovers story but let’s just say, they were too keen on each other for a while.

Amber Malloy dreamed of being a double agent but couldn’t pass the psych evaluation. Crushed by despair that she couldn’t legally shoot things, Amber pursued her second career choice as a pastry chef. When she’s not writing or whipping up a mean Snickers Cheesecake, she occasionally spies on her sommelier. Amber is convinced he’s faking his French accent.

Amber Malloy will be awarding a $10 Amazon or Barnes and Noble GC to a randomly drawn winner via rafflecopter during the tour.