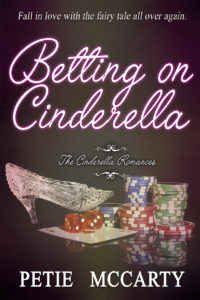 Garrett Tucker inherits his grandfather’s casino empire and steps into the reclusive billionaire’s shoes as the “Prince of Vegas.” His first act is to buy and renovate a bankrupt casino in Biloxi. When he discovers embezzling in his new operation, Garrett goes in undercover. His number one suspect is the new finance supervisor.

Andi Ryan moves to Biloxi to care for her godmother and takes a job as finance supervisor for the renovated Bayou Princess casino. She discovers someone is skimming from the till and starts her own investigation, worried she will be blamed for the theft when the new owner discovers her godmother has a costly gambling addiction.

Garrett’s rival Vegas competitor has sent a spy in to ruin the Bayou Princess, and Garrett and Andi are forced to work together to prove her innocence and discover the identity of their casino spy. 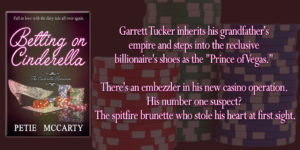 Garrett mentally kicked himself. He had gone and scared her.

Too much. Too soon.

But he couldn’t make himself move. He could lie here forever with Andi in his arms.

She looked too uncertain.

He was okay with, “Not now, but maybe later.”

Good thing he was sitting down. The jangle of fear that hit him could have knocked his knees out from under him.

What the hell? Can’t and won’t?

All his uncertainties flooded back. Flora had said Andi and Peters were just friends. Was that friends with benefits? And what about that damn Drakos pawing her last week? No, he wouldn’t let those doubts crowd them here on the couch.

“Partly.” She looked away, and his heart sank amongst the growing heap of doubts.

“There’s someone else,” he said flatly, working to keep his expression blank and the hurt at bay.

She met his gaze square on then, no doubt trying to muscle her courage. “There’s something I should tell you.”

What? Is that all?

He fought back a grin of pure joy. “I’ll give you lessons.” He pulled her back for another kiss.

She shoved at his chest. “No. I don’t think I should.”

She flinched at his expression, and he worked to smooth his scowl.

“Go ahead. Spit it out.” Even he didn’t like his tone. “You’re sleeping with someone else, right?”

He should have done his homework before he went off half-cocked with all the flowers and balloons, trying to woo her.

“No, and I should slap you for that, suggesting I’m loose enough to go out with you while sleeping with someone else.”

“Then what the hell is it?” he shouted, forgetting all about Flora at the back of the house.

“I’ve never done it before!” she shouted back.

“No, you jerk. Slept with someone.”

Did you know that Cinderella is my favorite Disney Princess?  I know, I’m old and I still believe in Prince Charming, too?  I waited 38 years for my Prince Charming.  I’d marry him all over again, too.  I think I’ve seen every retelling or something similar to Cinderella in books, movies, television shows and in my own mind.  What could have been a typical contemporary re-telling of Cinderella, Ms. McCarty puts a spin on the classic tale.

First, it is set in Mississippi within a casino and BOTH the hero and heroine are Cinderella.  I know you read that right.  Both of them.  For me, it made for a better story.  Why?  Because what could have been the same story told by so many other authors, once again, Ms. McCarty decides to add suspense, espionage, attempted murder, arson, a huge dose of romance with characters that you love from the very first page.  Oh yes, the cute meet is at a wedding but the fireworks don’t really start until they see each other again at the casino.  I will admit that I don’t “get” casinos.  I’m not a gambler but my husband is so that aspect of the story was just there for me.  I was more interested in Garrett and Andi as individuals and eventually a couple.  I found their romance, sweet, at times sexy and humorous.

Andi was a bit weak in the beginning for me but watching her bloom and get her backbone was refreshing.  The above scene brought many a smile to my face because I just felt like it wasn’t like she didn’t want to but to admit that to Garrett took a lot of gumption for her.  Plus, Garrett’s reaction is priceless.  These two in my book were born soulmates but it took a while for them to get together.  Between his grandfather’s will, her stepmother and stepsister (of yes, they are here) at times I worried.  And I never worry in a book.

I will say that I didn’t read the first book in the series but I never felt like I was missing anything.  The pacing is steady and quick.  The characters are well drawn out and the romance is sweet.  The casino part got really interesting in the end but again, I wasn’t reading the book for that.  😉  Overall, I really enjoyed the book and I look forward to reading more of Ms. McCarty’s work.  In fact, I have a historical romance of hers to read in the coming weeks.  Can.not.wait!

Petie McCarty will be awarding 3 eBook copies of Book 1 of the Cinderella Romances series: Cinderella Busted to 3 randomly drawn winners via rafflecopter during the tour.