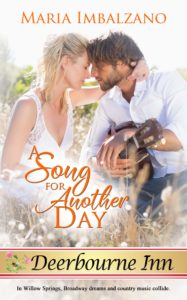 A SONG FOR ANOTHER DAY

Gigi Jenson, an up-and-coming Broadway star, finds herself in Willow Springs, Vermont, for the summer as director of their first annual community revue. This sleepy town is worlds away from her vibrant and beloved New York City, but the experience she’ll gain will be invaluable to her career.

Jason Simmons has lived in Willow Springs his entire life. Working several jobs while writing music, he yearns for a contract to record his songs. The one chance he had to make it in Nashville he blew due to stage fright.

When Jason volunteers to help Gigi with the revue, sparks ignite but their dreams are taking them in different directions. Will their love for each other ever guide them to the same path?

His forehead furrowed. “I’m Jason Simmons. From the Deerbourne Inn. Why are you holding your shoe as if you’re about to fling it at me? I’m not late, am I?”

“No, you’re on time. I had to jump back when that black pickup came in for a crash landing, and my heel got caught in the pavers.” She inspected her ruined designer shoe, the leather pushed up like an accordion. “Great. Now I won’t be able to wear these unless I can find a shoe repair shop here.”

“Sorry to hear that.” His tone didn’t quite convey the required regret, but this heel disaster wasn’t his fault. He probably thought her reaction was a bit over the top for a strappy sandal.

She bent over and slipped on her wounded shoe, feeling the heat of chocolate brown eyes wandering over her body as she stood.

“Did you notice that he decorated your pants, too?”

Not the words she expected after being raked over with such intensity. Although, really. He was a stranger. A very handsome stranger with flashing mocha eyes and shaggy brown hair that had the easy look of being finger-combed.

She looked down at her once-white silk pants, now dotted with various shades of mud. “Yes. It’s hard not to notice.”

This is such a sweet story.  And I don’t mean “sweet” either.  It’s open door but the overall feel of the story is sweet.  I loved Gigi from the beginning.  Dancer, singer, and actor from New York.  Jealous is what I felt.  My dream was to be a Rockette but sadly I was too short once I found out the requirements.  But I digress…I just lived through her and OMG…CATS!!!!!  The opening of the book with her is awesome.  I would have had the same reaction as her and trust me, I probably would have said some dirty words, too.

Jason is almost too good to be true.  But what made him unique was his stage fright.  It’s not what you think and Ms. Imbalzano does an excellent job with that aspect of his character.  I never expected his backstory to be so different and unique.  What I really liked about him was that he was true and honest with Gigi from the beginning.  This story didn’t have a lot of conflict in it but Ms. Imbalzano gave it just enough “what if” to keep it from being boring.

I really liked how the story flowed.  Be warned, it is a fast-paced, shorter story but again, Ms. Imbalzano does a great job with her characters and the plot.  I know that this book is part of series of books surrounding the inn but don’t worry, you don’t need to read every single one of them to understand this one.  I love it when publishers and authors write a series like this one.  You just read whichever one you want and not have to worry about continuity, remembering characters, etc.  Not going to lie though, this isn’t my first book from the author.  I read another one that was featured a dancer as the heroine and I loved that one, too.

Ms. Imbalzano and The Wild Rose Press have done it again.  I just love how Ms. Imbalzano writes her stories.  Easy flow, great characters, and a guaranteed HEA for everyone.  Oh, and the cover art is SPOT ON.  Kudos to Diane at TWPR for this one.  Nailed it. 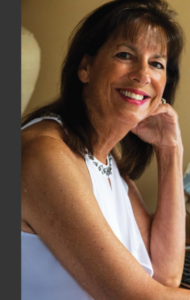 Maria Imbalzano is a retired matrimonial lawyer who now writes full time. Instead of drafting motions, legal memoranda, and briefs, although fascinating, she now spends her days creating memorable characters and taking them on their emotional journeys through her contemporary romance novels.

In addition to writing fiction, Maria is on the Friends of Thomas Edison State University Foundation Committee and is still involved with Dress for Success Central Jersey, having been a founding Board member. She also serves on the finance committee for The Present Day Club. She has received the distinguished Family of Edison Award for her work with The Thomas Edison State University Foundation, the Iron Mike Professional Achievement Award from Trenton Catholic Academy and was inducted into the Italian American National Hall of Fame.

Her novel, “Unchained Memories,” won the Wisconsin Romance Writers Write Touch Readers’ Award and the ACRA Readers’ Choice Heart of Excellence Award. “Sworn to Forget,” the first of the four-book Sworn Sisters Series was a finalist for the illustrious RONE award as well as the Book Buyers Best Award.

7 thoughts on “#Review of A Song for Another Day by Maria Imbalzano w/a rafflecopter giveaway! @MariaImbalzano @GoddessFish #contemporaryromance @wildrosepress”