This post is part of a virtual book tour organized by Goddess Fish Promotions. The author will be awarding a $10 Amazon/BN GC to 5 randomly drawn winners. Click on the tour banner to see the other stops on the tour. 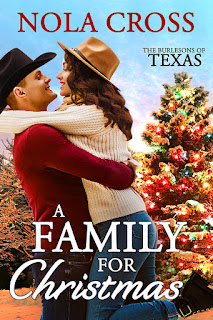 He never thought he’d have a real family Christmas…

For the past eight years, Bill Smith has been unable to set down roots. But he never forgot the magical night he spent with an auburn-haired beauty in Last Stand, Texas. When she finally tracked him down, he was more than happy to donate a kidney to AJ, the son he never knew he had. But now that AJ is better, Bill wants more time with him and his mother. He wants a family.

Annie Burleson can’t help but be grateful to this almost-stranger for saving AJ’s life. Still, she’s a little wary. AJ has already been through so much—what if Bill leaves again? And with Christmas in full swing, it’s difficult to discern which emotions are festive and which are forever.

As Annie and Bill’s lives collide, their mutual love for AJ makes this more than a marriage of convenience. But is it enough to give them the family Christmas they all deserve?

That night after the fishing expedition, Bill found himself lying awake, staring at the ceiling and thinking about the boy’s request for a brother. It was a natural thing for a child to ask about, but he himself had managed to push all thoughts of sex with Annie deep to the back of his mind. Now that he allowed the idea to bloom in his head, the memories of their one time together, all those years ago, came flooding through him.

This time he let himself remember everything: the silk of her skin, the scent of her hair, the plaintive sounds she made as he touched her. The way she had moved beneath him, welcomed him inside her. The more he let himself remember, the worse his body ached. Then Lucky began to snore, two beds away, and Bill knew all possibility of sleep was gone.

He stood up and took his jeans from the chair beside the bed, pulled them on, and put on his boots and jacket. Then he quietly made his way to the door. Outside, the Texas sky was black and clear and lit with a million stars. The land rolled, dark and mysterious, for more miles than he could see. Up on the ridge, a coyote began to sing, the eerie notes quivering as they echoed against the barn. He shivered. He knew how that coyote felt. He’d been alone for a good part of his life. But now he had the chance for something different. He had a son. And next Saturday he’d have a wife, too, if in name only.

Is that what he wanted?

My first Christmas themed book of the season.  I will admit that I normally don’t read Christmas themed books.  I have a love/hate relationship with the holiday that I will not get into right now.  But what I really liked about this one was that it really wasn’t about the holiday but the family that is trying to make it.  This is a second chance/marriage of convenience romance that really hit home with me.  Plus, AJ, the son is a fully fleshed-out character.  He’s not there for a couple of scenes but the story centers around him for the most part.  AJ is what brings Bill and Annie together in the beginning and also in the end.

Annie and Bill are a great couple from the start.  I understood Annie’s reluctance in the beginning with Bill and just watching them dance around each other was golden.  Ms. Cross gives you just enough of the sexual tension to make it interesting and then when they do get together it’s sweet, sexy, and swoon-worthy.  What was intriguing to me was that the black moment came from Annie and she was the one that had to make amends in the end.  Most writers do the opposite and I was glad that Ms. Cross went the other way.  Made the story richer for me and realistic.  Annie does something that really surprised me and I totally understood Bill’s reaction to it.  Bravo for the scene and aftermath.  That took guts.

I really liked Bill from the start.  He truly did love his son and wanted to get to know him better.  Plus, he was halfway in love with Annie, too.  Ms. Cross doesn’t make it easy for him but the payoff is totally worth it.  I just wish the book had been a bit longer.  Like did AJ ever get his wish from his parents?  I was laughing when AJ kept bringing it up.  Annie and Bill’s responses were always spot on.  Plus, Bill liked to read.  Score for me.

This is a brilliant book that is themed but it’s not the central part of the book.  The relationship between Annie and Bill, Bill and AJ, and ultimately, Annie, Bill, and AJ together.  Ms. Cross fleshes out each of the plots perfectly and the ending is well done.  Again, just wish it were longer.  The twist with the boat and machine is too dang awesome.  You gotta read it to find out what it is.

If you are looking for a sweet, honest look at how a one-night stand can mean more than you think, this book is for you.  I loved Ms. Cross’s voice and the pacing was pitch-perfect.  Plus, where is the mincemeat pie recipe?  Seriously, to mention Simon Baker in the book and I melted like butter.  Oh.my.word!  Don’t tease me like that.  That’s mean.

I remember as a small girl being fascinated with the idea that people could make up stories and the stories became books. I began writing my own stories before I even started school, and won my first writing contest at the age of nine. It’s always been my dream to be a published author. The road was a long and twisting one, but I finally made it. I’m proud to be a two-time Golden Heart finalist, and several of my stories have been Amazon best sellers.

5 thoughts on “#Review of A Family for Christmas (a Burlesons of Texas novel #2) by Nola Cross w/a rafflecopter giveaway! @NolaCross @GoddessFish”