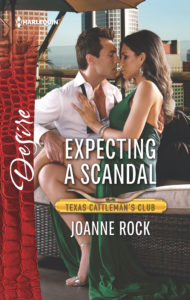 Five months pregnant and on her own. Even so, she can’t resist this rugged rancher…

Solely responsible for her unborn child, Abigail Stewart is desperate for the art commission at Royal Memorial Hospital. Winning over the sexy Texan on the board seems impossible, but Vaughn surprises her with his response. And his attention. And a sizzling connection that defies all logic. But even if he can accept her baby, will Vaughn’s dark past tear them apart?

Excerpt from Expecting a Scandal by Joanne Rock

“Detaching isn’t a problem for me,” Vaughn admitted, unwilling to confess how deeply he wrestled with the fallout from that skill. “Sometimes that makes me far too abrupt, as you witnessed firsthand in today’s committee meeting.”

He watched Abigail’s face, locking on her expression before he continued. “Were you venting negative emotions about that when you drew the picture of me?”

Perhaps she’d been expecting the question, or maybe she’d simply been more prepared to revisit the topic after her initial embarrassment about the sketch. She lifted a brow, her gaze wary, but she didn’t flush with discomfort this time.

“You noticed that and didn’t say anything?” She shook her head with a rueful laugh and leaned up against a built-in counter with cabinets below and shelves overhead. Paintbrushes in every size imaginable hung on a rack over the shelves. “I guess you are good at detaching. If I saw someone had made a picture of me, I would have been quick to ask a hundred questions about it.”

His gaze traveled her body, where her position drew all the more attention to her curves.

“I was curious.” He shoved his hands in his pockets to combat the urge to touch her. “I just didn’t think it was the right moment to ask.”

“Truthfully, yes, I felt frustrated about the meeting when I returned to the studio. I didn’t have any preconceived idea of what I would draw. I just sat down to blurt out anything that came to mind.” She met his eyes directly. Openly. “I was surprised when I saw you take shape on the paper.”

He wanted to think he’d ended up there because they had a connection. An undeniable spark.

Because the longer he lingered in Abigail’s sunny studio, the more he felt his normal boundaries crumbling. And while he wanted that—craved following up on the attraction simmering between them—he wasn’t sure how he would handle anything beyond simple lust. The realization made him edgy.

She filled the silence that followed with a sudden question. “Would you like me to finish the drawing?”

His throat went dry. The question had gotten complicated in the space of a moment as he started to recognize that Abigail wasn’t going to be the kind of woman who would be open to a purely physical relationship.

“I wouldn’t want to keep you from your work.” He couldn’t think of a more eloquent retreat with Abigail moving toward him. Touching him again.

“Not at all.” She took his hand briefly to lead him toward a chair near her painting spot, her touch fanning the flame inside him, making him think about so much more. “Have a seat and I’ll finish up. You can see what it’s like to watch an artist at work.”

In the space of five minutes, Vaughn realized he’d somehow used up all his emotional reserves today. All of his ability to detach. Because that simple touch from Abigail sent all the wrong messages to his brain. He hadn’t given himself the outlet of a sexual relationship since he’d returned from Afghanistan. And now, the consequences of that had him on sensory overload, when he’d already battled the aftermath of a hellish surgery this morning.

A perfect storm of too many emotions without enough time to process them. He should have taken the time to go home and pick up Ruby before he came here. Having his dog beside him would have helped.

But he was already sitting in the seat Abigail had shown him when she returned with a heavy pencil in one hand and her half-made sketch in the other. She set both on a low table nearby, then moved closer to him, her gaze all over him. Studying him.

Seeing inside him somehow.

“Do you mind if I position you just a little?” she asked, already setting aside the folder he’d been carrying.

He wasn’t sure if he’d agreed or not. His forehead broke out in a sweat. Warning heat blasted up his back. He wanted her.

“Here.” Abigail set her hands on his shoulders and gently shifted them toward her.

She stood close, her knee brushing his thigh as she moved him, her breasts at eye level. She smelled like cinnamon and oranges, a spicy, tangy fragrance that would be burned into his memory forever. Sunlight kissed her face as she lifted his chin with one palm, her eyes taking a critical assessment of his features while he battled lust and a whole knot of other things he couldn’t come close to naming. Hunger for her gnawed at him. Hot. Persistent.

“I’ve got to go.” He clamped a hand on her wrist. Too hard at first. But then, realizing his responses were all out of whack, he gentled his hand. Released her. “I’m sorry, Abigail. I forgot that I said I would—” He rose from the chair. Sidestepped her. “Upload my notes on a critical care patient after some—” His brain worked to come up with something vaguely believable before he did something stupid. Like kiss her until they were both breathless. Senseless. “Technical difficulties at the hospital.”

His voice rasped drily as he grappled for control.

“Of course.” She nodded even though she appeared as perplexed as he felt. “I’m sure I’ll see you at the hospital when I start work on site.”

“Right.” He didn’t reiterate his offer for her to come by his ranch. He needed to get his head on straight first. “I’m sure you will.”

Backing out of the door, he lifted a hand in a quick wave.

“Thank you for coming by. I couldn’t be more excited about the project,” she called after him.

But Vaughn didn’t answer. He was down the steps and seated in his truck in no time, slamming the door behind him while he turned over the engine and blasted the air-conditioning on his overheated body.

He didn’t know what the hell he’d been thinking, pursuing this sudden attraction he was clearly not ready to handle. Maybe some other day, when he wasn’t already depleted from a surgery that had brought back too many memories. But for right now, he needed to put some distance between him and a woman who stirred a surplus of emotions. No matter how much he thought he had mastered detachment, Abigail Stewart made him realize he’d only succeeded in getting damn good at lying to himself. 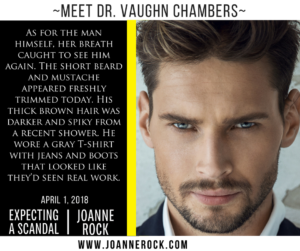 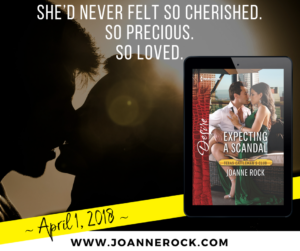 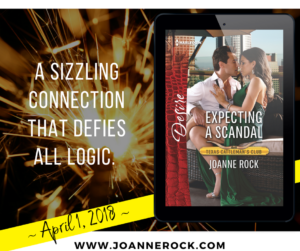 Guys this series.  Yes, I’m talking about the Texas Cattleman’s.  I love this series.  I’ve been reading it for like ever and I loved Ms. Rock entry.  Of course, now, I have to found out how it will all play out with Will.  That said, you don’t have to read all the books to catch up.  The series is centered around a town called Royal, Texas and the club is like a country club for the wealthy in town.  Grandfathers passed down to fathers and now fathers to sons.  Vaughn is one of its members, along with his dad.

Vaughn is just a delight.  I know, probably a bad choice of words but he is.  He isn’t alpha, a douche but an all around good guy.  He is dealing with some issues that he brought back from his tours and Ms. Rock treats them humanely and realistic.  In fact, his therapy dog stole my heart when he kept looking for Abigail in the bedroom.  *sigh*  What really made me like Vaughn was his approach to Abigail in the beginning.  Sure there is a bit of insta going on but it made sense in the end.  Vaughn knew his demons and didn’t want Abigail to get too involved.

Abigail is a strong woman.  In most Desire’s they can be a bit for me but not her.  She took her situation and didn’t dwell on it but just continued to move forward.  What she didn’t expect was Vaughn and his love in the end.  These two had a lot to get through and watching their friendship and then love relationship grow was a treat.  Ms. Rock moved the story forward at a quick pace and the mystery element running through it was perfect.

I can’t wait to get my hands on the next Cattleman’s book to see how this is all going to play out.  Did he really die or is going to come after Abigail once he realizes that he is a daddy?  Plus, it’s a blast to come back to Royal and the Club to check up on everyone.

Four-time RITA nominee Joanne Rock has never met a romance sub-genre she didn’t like. The author of over eighty books enjoys writing a wide range of stories, most recently focusing on sexy contemporaries and small town family sagas. An optimist by nature and perpetual seeker of silver linings, Joanne finds romance fits her life outlook perfectly–love is worth fighting for. A frequent speaker at regional and national writing conferences she enjoys giving back to the writing community that nurtured and inspired her early career. She has a Masters degree in Literature from the University of Louisville but credits her fiction writing skills to her intensive study with friend and fellow author Catherine Mann. When she’s not writing, Joanne enjoys travel, especially to see her favorite sports teams play with her former sports editor husband and three athletic-minded sons.