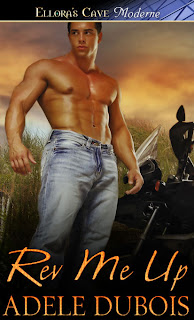 Lisa has always been a Good Girl. When she flashes her breasts at the hunk riding by on his Harley, her wild impulse seems like harmless fun. How could she know he’d hit the curb and land at her feet? To make amends with the cop from , Lisa agrees to a cocktail with him. When she slides on the bike and wraps her arms around Antonio’s buff body, they take off on the ultimate ride.
Antonio’s in town for his brother’s graduation before heading to FBI training. Lisa’s there to break up with her cheating midshipman boyfriend. Revenge sex with a hot cop may be the perfect way to unleash her inner Bad Girl. But can she keep her feelings casual?
With sexy Antonio by her side and the lust blazing between them, this Bad Girl may have a chance to have it all. As long as an ex-boyfriend out for revenge doesn’t destroy her new happiness.
Review:

First off let me tell you that you will need a hose, a partner and whatever you got handy to cool you off while you read this book.  You’ve been warned…seriously.

Lisa is the kind of girl that we all are:  great job, great friends, great house, etc.  She has a boyfriend, Rick, at the Naval Academy that she thinks she is in love with.  You know, the Good Girl.  Well, going back to Annapolis to break up with Rick, she flashes a guy on a Harley.  What she didn’t expect was to fall for the guy.  She just wanted to be the Bad Girl for awhile.  Lisa is a very fleshed out character.  She could be you or she could be me.  She knew what she had to do with Rick and didn’t back down.  She’s a strong woman and doesn’t need a man to make her whole.  She is the kind of woman that I would love to have as a friend.

Antonio is alpha personified.  Strong, sexy, knows what he wants and takes it.  He is also tender, loving and loyal.  He is close to his brother and mother.  Any man that respects the familia is great in my eyes.  On his way to his brother’s graduation at the academy, he gets flashed by a gorgeous woman and ends up crashing his Harley.  What he gets is a whole lot more than he bargained for.  A strong, sensual, smart woman who is not afraid to go for what she wants out of life.  He also didn’t expect to have to deal with a pyscho ex-boyfriend either.  I loved Antonio.  He’s a softie at heart but will pull the muscles out if needed.

We are introduced to Antonio’s brother Tomas and his girlfriend Crystal.  They are an absolute hoot and don’t over power the story.  They enchance it and to say that I’m looking forward to their story would be an understatement.  You will never look at a stripper or strip club the same way again.  Trust me on this.

I warned you at the beginning that you will need a hose to cool off or you’re partner close by.  I mean it.  Ms. Dubois writes some of the most sensual, sexiest scenes I’ve ever read.  ***fans self still***  While sexy enough, they are also tender, loving and highly emotional.  I will never, ever look at a french fry the same way again.

In the end, I found myself wanting more from Antonio and Lisa.  While he was very upfront with Lisa about going to the FBI Academy, I felt their pain knowing that he was leaving.  The ending was pefect for the two of them.  I look forward to Tomas and Crystal’s book to see Antonio and Lisa again.

Run, don’t walk to read Rev Me Up.  You will not be disappointed.  Ms. Dubois has written layered, emotional characters that you will root for and will want to hang out with by the bay.

9 thoughts on “Rev Me Up by Adele Dubois-review”