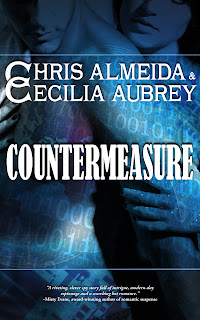 Chris and Celila will be offering one commenter a copy of Countermeasure and a grand prize of the entire Countermeasure Series (5 ebooks total) Please put the rafflecopter code below your post for your giveaway. Your readers must comment on the blog post and fill out the rafflecopter to enter.
Each contest stays open for the entirety of the tour and all winners will be picked by me and notified via email. All commenters will be allowed to go back and enter the previous contests.
Blurb:
Cassandra James, an ex-CIA agent, was injured in the line of duty and upon recovery accepted a job at her father’s security company. She never expected to fall in love with her suspect in an industrial data espionage case, however, when she met Trevor Bauer, he rocked her world and turned everything she had convinced herself about love upside down.
Trevor Bauer, an NSA analyst, has struggled with the disappearance and possible death of his parents. He reopens his parents’ case looking for answers to the mystery of their disappearance. When the first real clue manifests itself, he doesn’t expect his little intrusion would lead his dream of a soul mate to his door step much less someone who would take up the mantle of his quest and embrace it Cassandra had. They embark on an exciting adventure.
Their search will lead them into the mysterious and violent world of data espionage and will test their love as they sweep the world with romance, sex, love, and intrigue to find their answers.
Deep POV and Show in Romantic Suspense
We start our Blog Tour with thanking all the host blogs for the opportunity to showcase all the Countermeasure books this week and welcome the release of our latest short story in the Countermeasure Bytes of Life, Passion at Dawn.
A big thank you goes out to Harlie for having us on the first day of the Passionate Tour and to Leagh Christensen for the amazing help with setting up the whole shebang and for keeping us sane.
To kick off the tour we will introduce the subject of deep POV and show in Romantic Suspense.
Deep POV is third person Point of View on steroids. Not only do you, the reader, see the scene through the character’s eyes but also his/her emotions, thoughts, experiences. The 3D feeling is achieved by giving not only the emotions but the senses. Taste, smell, touch, sight, and hearing give color to the pictures painted in the reader’s mind.
Cecilia and I use our Role Play experience to enhance the deep POV in our books. Typically, we try to keep POV in our scenes limited to one or two characters. The length of each character’s POV is determined by the type of scene, but when we do switch, we avoid head hopping by giving a good distance between the hops. When the scene gets heated (which eventually happens with Cassie and Trev), we convey both sides of the scene, giving the full onslaught of emotions, sensations coursing through both characters. In those scenes, not just the physical aspect of it is important but the emotional aspect, the connection they have.
In Romantic Suspense, things go about the same way but with a punch. Literally. The fight,  torture, and murders scenes happen in full Technicolor. The reaction of the character during tense scenes, like the one in the hotel room in Monaco, explains a lot about his/her inner steel. Emotional and physical reactions, as well as thoughts, play a big part in those scenes, pulling the reader with the character on a wild ride. The faster the pace, the more show, the deeper the POV.
By diving deep under the character’s skin, we are able to give a deep POV with shows and makes the characters pop from the pages, breathe through the words. They make you feel heartbreak, sorrow, happiness, and terror through the their eyes.
How about you? Have you ever been overwhelmed by a fictional character’s emotions? Leave your comment to enter the giveaway for a chance to win a copy of Countermeasure.
Sláinte!
Chris
﻿

Buy Links
Available in Print from: