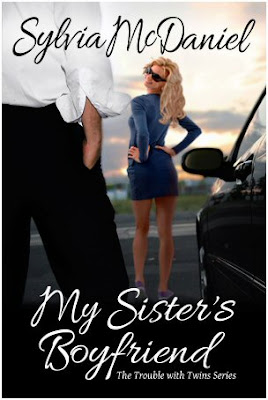 Title: My Sister’s Boyfriend
Series: The Trouble with Twins
Author: Sylvia McDaniel
Publisher: Virtual Bookseller
Length: 167 pages/70,000 words
Genres: Contemporary Romance (Comedy)
Heat Level: Sensual
BLURB
The trouble with identical twins…
He’s back. The one guy she never wanted to see again. Her high school indiscretion, Brent Moulton, has returned to Tyler, Texas. Only Jennifer Riley knows the truth about that night so long ago when she switched places with her twin sister, Julie, and gave her virginity along with her heart, to her sister’s boyfriend in the backseat of his father’s Mustang.
…they look alike.
Fifteen years later, life has thrown them back together. Will Brent realize he slept with the wrong twin? Will he overcome his commitment issues and realize that Jennifer just might be the right twin for him.