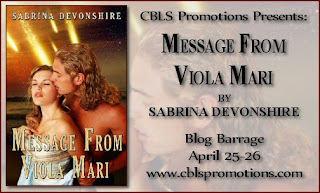 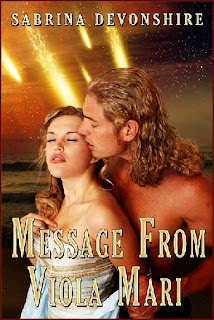 World-renowned oceanographer and
meteorite specialist Marissa Jones uncovers evidence that a comet cloud will
soon destroy Earth. When aspiring writer and her best friend Jennifer begs her
to take a Saturday morning sci-fi writing class, Marissa reluctantly agrees.
Writing her real-life story as fiction gives her an astonishing new perspective
on the anomalous set of craters she discovered off the La Jolla Coast.
But this favor for her friend
stirs up more than scientific results…writing teacher Justin Lincoln goads her
constantly and taunts her with his irresistible curly blond locks and steely
physique he knows only too well make women drool. Marissa teeters on the edge
of anger and raging attraction for this irritating man. But it’s a terrible
time to let lust call the shots when the world’s about to end and Marissa’s the
only one who can save everyone.
Warning: This title is intended for readers over the age of 18 as it
contains explicit sex scenes and/or situations and adult language, and may be
considered offensive to some readers.

Excerpt:
Men in my life, in La Jolla and elsewhere, had been few and far
between. I spent most of my waking hours working alongside male coworkers who
cocooned themselves in polyester and bathed infrequently. My mother suggested
taking up tennis and golf to meet eligible bachelors, so I dutifully joined the
La Jolla Beach and Tennis Club.
On the tennis and golf course, the closest I ever came to a
romantic encounter was when a Kevin Costner look-alike handed me a golf ball
that had hit him in the head and glared at me. Then there was the titillating
conversation I had with a dark-haired police officer after I sent a golf ball
reeling through the window of someone’s BMW.
It’s not that I’m out of shape. I’m proficient at running and
swimming. But engaging in any sport that requires swinging, balancing or
hitting any kind of target—other than an unintended one—is a high-risk endeavor
for me.
People
often romanticize the typical day-in-the-life of a female oceanographer. They
imagine that I stand with windblown hair on the bow of a majestic ocean vessel,
my makeup undisturbed after photographing underwater scenes from the safe
cocoon of my submersible. But no, I am the woman every mother prays her
daughter won’t become. Once a tomboy who petted amphibians and reptiles and
collected rows of muddy rocks, rather than dolls, I’m now an employed adult who
rarely dons cosmetic products and spends most of my waking hours in a
windowless laboratory.
I
was completely content with my dirty fingernails, make-up free face, and
solitary weekend nights in the lab until one of Jennifer’s schemes landed me
face-to-face with a man who transformed my ordered universe into chaos.

Reviews:
5 Stars from Ellen Cross—“Marissa Jones is a young Oceanographer and
Metorite specialist, with a poor track record with men. Driven by her best
friend, Jennifer, to join a sci-fi writing class, Mari is forced to suffer the
frustratingly personal attention of her beyond mouth-watering, yet insanely
irritating teacher, Justin Lincoln. One look at Justin, and Mari doesn’t know
whether to follow her body’s desire to kiss him, or satisfy her mind’s urge to
punch his lights out. Mari’s research into the mysterious craters on the ocean
floor, leads her to the discovery that the earth’s end is approaching in a
cataclysmic event that will claim all life. With no-one willing to believe her
research, Mari is left with not only the fate of all mankind in her hands, but
a best friend to keep happy, a sexy man to figure out, and a book to finish
writing. Simple huh? Sabrina Devonshire has exploded into the sci-fi genre with
“A message from Viola Mari”. Her beautifully descriptive style with
the delicious splashes of witty humour throughout, are a delight for the
senses. “Message from Viola Mari” will keep you guessing right up until the
very last page.”
5 Star from Dean C. McMillin—“Marissa Jones is an oceanic geologist
specializing in studying ancient meteorite impacts. She’s tough and serious
with little need for anything else in her life … But, when her best friend
talks her into enrolling in a creative writing course, she falls hard for the
instructor, Justin Lincoln, much to her embarrassment. Marissa can’t believe
that she’s so attracted to the hunky writing guru. She has to get over her own
insecurities and accept the truth of his love … At the same time, she is
uncovering an ancient secret that might mean doom for humanity … Unless she
can find a solution and decipher what she believes is an alien message of hope.
Investigating ancient underwater meteorite impact sites with Justin, Marissa
becomes involved in life-threatening intrigues in a conflict that leads to an
action-packed climax. This was an offbeat novel which I found to be a quick and
easy read. The characters were sympathetic and relatable, and writing was
clear, the story briskly paced. The story veers quite heavily into science
fiction territory near the end, which is set up very well earlier in the book.
Overall, a fun, light read.”
About Author Sabrina Devonshire:

Sabrina Devonshire, an
avid swimmer most of her life, can usually be found near or immersed in a body
of water. If she’s not seeking an endorphin rush in a pool, lake or ocean,
she’s often encouraging people to work out or writing a book or magazine
article. She also loves traveling to off-the-beaten-path places where phones and
electronic devices tend not to work well. Peru and Belize are two of her
favorites. Sabrina lives in southern Arizona with her husband, two children,
and fluffy dog, Sugar.
Connect with Sabrina Devonshire:
Email  |  Website  |  Blog  |  Twitter
Giveaway Info:

Prize is 5 eBook copies (1 each to 5 winners) of “Message from Viola
Mari”. Contest is tour-wide and ends May 1. Must be 18 years of age or
older to enter.