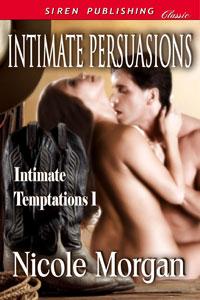 Ann moved to Oakdale for a fresh start, and when she met Quinn, a sexy cowboy, she instantly fell for him. Unable to deny herself the need to have him, she gives in to a secret fantasy, only to fear their relationship will end before it truly starts.

Quinn soon realizes Ann means more to him than he ever could have imagined. He feels a connection with her that’s much deeper than physical, but he has secret desires he keeps to himself, afraid to scare her with what he wants most.

Will they find a way to show each other their true selves and finally love each other completely? And if so, will Ann give him a part of herself she has given to no man before?

Wow, just wow.  When Nicole emailed and asked me if I wanted to review some of her older books, I was intrigued.  I decided on her Intimate series for a couple of reasons.  The first being that involved the old troupe…miscommunication.  Second, cowboys and last, I had to find out what she was willing to do with Quinn.  The blurb gives nothing away.  Good job.

The miscommunication in this book is funny, yes funny and heartbreaking.  I’ve read some books where the troupe is over used but not here.  It actually moves the story forward and leads to some scenes that are handling and very amusing way.  Lets just say the motel scene with Ann is too good to be true.  Quinn and Ann learn alot about each other through the miscommunication and about themselves, too.  What does every relationship person tell you?  Communicate, communicate, communicate.

The action between Ann and Quinn starts fast and never lets up.  Sometimes that’s a good thing and sometimes bad.  In this book, its a good thing.  Their first interlude had me laughing out loud.  Yes, laughing.  Read it…you will understand.  While there is a lot of sex in this book, there is a definite point to it all.  It  comes back to communication and how we tell our partners what we want and don’t want in bed.  Great job Nicole.

Derek, Quinn’s brother is a joy to read.  He is a secondary character that is a wonderful addition to the story.  He almost steals the scenes he is in but he pulls back and lets Ann & Quinn take over.  Derek’s book is next.  The scenes between Derek and Ann are funny and poignant.  She has truly found a friend.

Overall, I loved this book.  Not too many characters to get involved with to draw out the story.  Its straightforward in its pacing, plot and characterizations.  Its a story about finding the one person that truly loves you and the miscommunication that almost drives you apart.

By the way…I know what she is willing to do with Quinn.  The scenes before and after had me laughing and panting all at the same time.  🙂