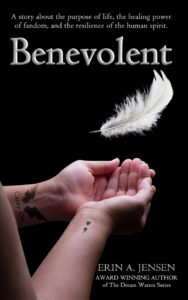 by Erin A. Jensen

A story about the purpose of life, the healing power of fandom, and the resilience of the human spirit.

Tormented by the in-crowd at school on a daily basis, there were two things that gave fifteen-year-old Abigail Perkins the strength to keep going—her best friend, Danny Cobb; and her favorite television show, Supernatural. But the night Danny’s mother calls to say that his battle with cancer is nearing its end, and the doctors don’t expect him to live through the night, even Supernatural can’t dull the ache in her heart.

Devastated by her impending loss and crushed that Danny’s mother won’t allow her to visit him one last time, Abigail crawls into bed and cries herself to sleep that night; and she wakes to find Supernatural’s most endearing angel standing at the foot of her bed.

Told from Abigail’s perspective as she nears the end of her long life and revisits the moments that defined it, this story was inspired by the deep connection that Supernatural fans feel with the show’s beloved characters, and the show’s miraculous ability to help its fans through troubled times.

I flashed him a sympathetic smile. “What are you thinking?”

“I have never understood why humans are so moved by music,” he muttered as his eyes searched mine.

“Music is the closest thing that we have to magic,” I confided in a reverent whisper, “because it has the power to anchor us to a moment in time.”

His half-smile conveyed a heartwarming mix of curiosity and affection. “How so?”

I felt my face flush a shade darker as I grinned at him. “When we hear a song from our past, it conjures up all the old sensations that we felt when we first heard it.”

He eyed me with a perplexed frown as he took a step toward me. “How can a combination of man-made instruments and human vocal chords wield that sort of power?”

“I can’t explain it with words,” I whispered, “It’s something that you just have to feel.”

He stood there staring at me with that puzzled expression on his face as I stepped closer and carefully inserted the earpiece in my hand into his left ear, so the music connected the two of us, just as surely as the cord connected the earbuds in our ears. “Maybe you’d understand what I mean if you danced to the music.”

“I don’t dance,” he muttered as he watched me begin to sway to the beat.

I smiled at him as I took his hands in mine and moved his arms in time with the music, like a puppeteer pulling a life-sized marionette’s strings. “Anyone can dance. You just have to let go and let the music guide your movements.”

A skeptical frown spread across his face as he watched me, but he let me direct his movements nonetheless. He was stiff and awkward at first but as the music grew louder, he seemed to find the rhythm. “These words are nonsense,” he muttered.

He was a remarkably fast learner, but I suppose being on earth since the dawn of time had given him plenty of opportunities to watch humans dance. Once he started to feel the music, he moved with all the grace that you’d imagine an angel would.

“Hey Jude” gradually faded away until there was nothing but silence in our twin earpieces.

We stopped moving and stood there staring at each other while we waited for the next song to guide our movements.

Welcome Erin Jensen! Please start off by telling us a little about yourself.

Thank you for hosting today’s stop on my tour! My bio has all the standard info about me, so I guess I’ll share a few random facts that aren’t in it. I’ve been writing books for about seven years now, but for the first three years I wrote my debut novel in secret. I’m not a morning person, and I’m hopelessly addicted to coffee. I love peanut butter cups but don’t keep them in my house because my younger son is allergic to peanuts. My friends feed them to me whenever we get together at one of their houses, and I love them dearly for it. My ideal vacation involves a tropical beach and a great book to read with my toes sunk in the sand. If I ever get a movie deal for my Dream Waters books, I have loads of people who’ve volunteered to be extras. Two of my dear friends have asked to be trolls drinking beer in the tavern in my Dream World, and a fellow pharmacist asked me to promise in front of witnesses that I’d invite him to the movie premier. It feels pretty amazing to know they’ve all got that much faith in my future success!

Is Benevolent a single title, or part of a series?

Benevolent is my first standalone novel. My first three books were all part of my Dream Waters Series. This was a unique concept for a story that I was so excited to write that I took a year off from writing Book Four of the series. I’m also pretty attached to this particular story because it’s got more of me in it than any of my other books and all the net proceeds are going to Random Acts, a charitable organization that inspires and funds acts of kindness both big and small all over the world.

Benevolent was inspired by a lot of separate factors. The character Castiel on the television show Supernatural and Misha Collins, the actor who plays the trench-coat-wearing angel, were the original inspiration for the book. The Supernatural fandom also played a part in inspiring the story, and after researching guardian angels and reading that they’re most active at the hour of death, I decided to tell the story from the main character’s point of view at the end of her long life. The end-of-life scenes in the book were inspired by my time with my grandfather in the hours before his death. I know that makes the book sound depressing, but several readers have reached out to tell me the story actually brought them a great deal of comfort and hope. At its heart, Benevolent is more of a celebration of life, and using the time you have to make a difference in the lives of others, than a story about a dying woman’s final hours.

Who are your favorite authors, and books/series?

I love Karen Marie Moning’s Fever Series. J.K. Rowling’s Harry Potter Series is another favorite. Emily Bronte’s Wuthering Heights is my favorite classic novel. To Kill a Mockingbird is another classic favorite. I recently listened to the audiobook of Jodi Picoult’s The Storyteller (to get a feel for audiobooks before I narrated Benevolent’s audiobook), and I loved it so much that I’ve already begun listening to it over again.

If you could have a roundtable discussion with any authors, who would you invite?

I think I’d invite the authors whose journeys have been an inspiration to me. J.K. Rowling would be at the top of that list because she started from nothing and has accomplished more than any author could ever dream of. Andy Weir has been an inspiration ever since I read that he started out publishing The Martian a chapter at a time for free on his blog. He ended up seeing his story play out on the big screen with Matt Damon playing the lead character. Stephanie Meyers’s story inspired me because she wrote Twilight without telling anyone but her sister that she’d written a book, and that turned out pretty well for her. I’d love to meet Karen Marie Moning because her Fever Series is one of my favorites, and Stephen King would get an invite because it was an interview of his that first made me consider writing a book. I could keep going. How big is this table?

I’m not really allowed to share that because it’d be a HIPPA violation. We hear and see plenty of strange things at the pharmacy where I work as a part-time pharmacist. In fact, I can’t tell you how many times a co-worker has said I should write a book about our experiences. Let’s just say, every time I think there’s nothing left that could shock me, a customer comes in to prove me wrong.

Don’t give up on your dream. Keep on writing and reading to improve your craft, and don’t be afraid to put yourself out there. Even the negative feedback can be a learning opportunity if you look at it the right way. 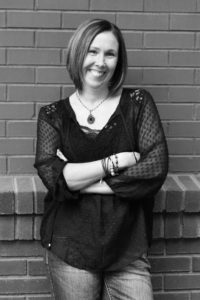 Erin Jensen is the Amazon International bestselling author of The Dream Waters Series. She was awarded the Bronze Medal for fantasy fiction in the 2018 Readers’ Favorite international book awards. She also received Honorable Mention for fantasy fiction in the 2018 Writer’s Digest self-published e-book awards. A part-time pharmacist and a full-time daydreamer, she resides in upstate New York with her ridiculously supportive husband, two teenage sons–who are both taller than her–and a Yorkshire terrier who thinks he’s the family bodyguard.

Erin A. Jensen will be awarding $50 Amazon or B/N GC to a randomly drawn winner via rafflecopter during the tour.