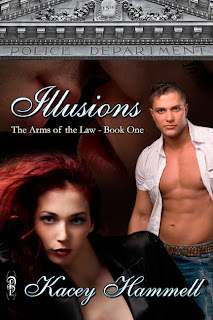 Protection. Adventure. Love.
It’s all found within The Arms of the Law…
Detective Isabella Knowles, a tough-as-nails cop, lives by the law, and knows what she wants out of life. And it doesn’t include marriage or all that comes with it. Everything Isabella has ever known seems like an illusion when a new relationship makes her feel more alive than ever before.  She isn’t happy about it and fights it every step of the way.
Burned by his fiancé years ago, seer and P.I., Brady Jacobs never wants another commitment in his life.  But his bachelorhood and heart are threatened when he has one of his visions and see a killer striking too close to the woman he has recently come to love.
Danger lurks close to home and neither Brady nor Isabella like that they can’t control every situation…especially matters of the heart.

“What’s this? A party and no one told me?”
At the newest addition to the conversation, Isabella’s pulse accelerated double-time. She looked toward the door
Man, I don’t need this today.
Brady Jacobs walked—no, sauntered—into the office and heading toward Ethan, spared her not a glance.
Black denim jeans encased his firm, shapely ass like a second skin and a black T-shirt with sleeves rolled over his beautiful biceps. He looked good enough to eat. A flood of heat coursed through her body. Brady was a man who was confident in himself and when he entered the room, there was a ripple effect. Everyone sat up to take notice of him and women practically swooned, eager to catch his eye. But Brady rarely gave any one woman the time of day. He was adamant about keeping his personal life private, and his no-commitment rule was always in full force. Something he was always upfront about with the ladies.
“Hey, pal. Great game this morning.” Brady slapped Ethan on the back.
“Shit, Jacobs. You kicked my ass and then some.” Ethan chuckled. “My head just wasn’t in it today.” Isabella could see Ethan’s gaze move again toward the newspaper on Alicia’s desk.
If it wouldn’t be obvious, I’d snatch it and run to burn it.
“Morning, Ms. Alicia. How’s my sugar-girl today?” Brady headed over to Alicia’s desk, ruffling her hair as he stepped behind her, as if she were his little sister.
Leave it to Brady. Always make the ladies feel special.
“Get lost, Jacobs. I’m sick of seeing you around here,” Alicia said flippantly.
She must really be pissed about the photo. Isabella let out a frustrated sigh, causing three sets of eyes to look her way.
“Morning, Brady.” Isabella smiled, hoping she looked like a woman with not a care in the world. “What brings you to the precinct this early in the morning?”
Brady’s gaze held hers for seconds longer than she would have liked.
“Actually, I came to see Alicia. I need to go over the Vaughn case with her. I had another vision last night.” He spoke without hesitation.
Trenton’s finest P.I. had become the city’s favorite after his first vision had saved the Walker twins eight years ago. The twins, then seven years old, had wandered off into the woods behind their family home one afternoon. When they didn’t return to the house for dinner that night, their frantic mother had called the police, begging someone to help her find her missing boys.
Within hours, an Amber Alert had been called and hundreds of citizens and every cop available had combed the Walkers’ woods, looking for the boys. After six hours without success, exhaustion had set in with many of the volunteers. Everyone had worked tirelessly, but when there seemed to be no hope in sight, Brady showed up, at a frantic near-run, and charged into the woods. Within thirty minutes, he came back out with a boy tucked under each arm.
Only after the Walkers had been calmed, the boys tucked into bed, did Isabella and Connor question Brady. With much resistance, Brady confessed to his ESP, the visions that had begun during his stint in the Marines.
Most times, out of nowhere—Brady could be sleeping, driving, taking a shower—and a vision would claim him. In the eight years since the Walker incident, Brady had probably saved more lives than most cops.
While he didn’t have visions for every beating, murder, kidnapping, or mugging in New Jersey, high-profile incidents seemed to find a channel in Brady.
With each high-profile case solved successfully, Trenton’s citizens claimed him as a favorite son. If a child ran away, parents would hire Brady to assist in bringing them home. If there were a murder, police at a dead end would call Brady in.
No one thought anything unkind about him or his visions.
It made his P.I. business a huge success and he took it all in stride. Isabella admired him for it.
“Damn, Brady. Why didn’t you call me immediately?” Alicia growled in a disgruntled voice.
“I am telling you, Alicia. I had to get the whole thing in order before contacting you.” Brady shook his head and headed for the window overlooking West Street, the one she had just moments ago been staring out of.
“Well? What have you got for me?” Alicia demanded.
With a chuckle, Brady turned back to Alicia. “Impatient damn woman, aren’t you? Just like your cousin. Always impatient for more.”
Isabella felt her cheeks burn and prayed Brady wasn’t being an ass on purpose to start further questions running through Alicia’s mind. She didn’t need them from her.
“If people would deliver, Brady, I wouldn’t need more,” Isabella declared with some satisfaction. His eyes turned a darker grey than their normal silver color.
Don’t mess me with me and think you’ll win, big guy.

Knowing she would soon run out of time before his arrival, and getting more aroused by the second, Isabella hurriedly reached for her bath sponge. Soaping it up, she cleansed her body with an eagerness she was growing accustomed to feeling whenever she had plans to see him.
Sponging all suds from her clean body, Isabella pulled the plug in the drain, and stood in the tub, reaching for a thick, blue towel from the shelf.
She rubbed vigorously at her body, drying it, and reached for the strawberry body lotion that went with her bubble bath. She poured a generous amount into her palm, rubbing her hands together to coat them in the sweet smell. Then she smoothed it over her arms, her breasts, stomach, and legs. The scent of strawberries made her smile.
Humming Destiny’s Child’s ancient hit Soldier to herself, Isabella wondered how many more minutes she’d have to wait before her soldier made an appearance.
She recapped the body lotion and tucked the towel loosely around her once again. Her heart skipped a beat when she heard the sound of the front door closing.
She hazarded a glance in the mirror. With the mussed, damp tendrils of hair around her shoulders, the towel haphazardly wrapped around her, she looked like a woman eager for a man’s—her man’s—touch.
The sound of a boot hitting the floor with a thud caused her to smile, and she moved to the doorway of the bathroom.
Hearing another boot drop and the sound of heavy breathing, Isabella peered into the hallway. When he finally came into view, she was already breathless, even though she had been expecting him.
Dressed in his usual black denim, form-fitting jeans, and dark hair damp as if he too had taken a few moments to clean up, he was a sight to behold.
Isabella’s heart thudded rapidly and her legs threatened to give out. She noticed his leather jacket, undone, over a naked torso. Obviously his zealousness to be with her had him forgetting a few things.
There they were. The abs, the washboard stomach had her literally teetering on the edge of orgasm already—and he hadn’t even touched her.
Finally lifting her gaze to his face, his smoldering silver-gray eyes captured hers. She had to lean against the doorjamb for support.
He always made her speechless. His beauty, his charm oozed from him with no effort at all. How she had gone so long, so many years as friends with him and never really noticed him in such a way before? Some detective she was, not seeing what was directly in front of her.
As he moved toward her, his pace slowed, as if he knew the effect he was having on her and wanted her to crave him more desperately than ever. His face broke into a sinful grin, telling her he knew exactly what he was playing at.
Never one to let anyone, least of all this man, have the upper hand, Isabella let go of the towel she was still holding around her. It slithered downed her body, pooling at her feet. Noting his small stumble mid-stride, she relished the power she had over him.
Naked and confident, she smiled at the man she needed to feel against her. Desperate to have his hands on her, she called to him.
“Brady….”
REVIEW:
BUY LINKS:
Amazon (Kindle Edition) – http://www.amazon.com/Illusions-Arms-Law-ebook/dp/B007E3FBDW/ref=sr_1_2?s=books&ie=UTF8&qid=1330450661&sr=1-2
Decadent Publishing – http://www.decadentpublishing.com/product_info.php?products_id=489&osCsid=534ladib313mjfmjbr83bc7e47
Smashwords – http://www.smashwords.com/books/view/136898
ABOUT THE AUTHOR:
Canadian-born author, Kacey Hammell is a self-proclaimed book-a-holic, who began reading romances at a young age and became easily addicted.  As a Mom of three, Kacey has made certain that each of her children know the value of the written word and the adventures they could escape on by becoming book-a-holics in their own right. 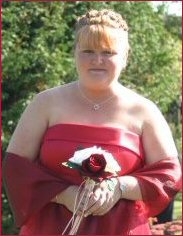 A decade ago, while working for multiple review sites, Kacey quickly discovered that she was developing the writing bug. Thanks to the encouragement of her own beloved hero husband, she decided to try her hand at writing.
With a love of contemporary settings, modern day romances and the happily ever after, as well as the excitement of suspense, Kacey creates stories in genres she’s familiar with and that she loves most. She also loves vampires who nibble the necks of the heroines, ghosts who can’t leave a loved one, shape-shifters who are sexier than hell and the thought of her very own werewolf or were-cat to tame makes her tremble!
Readers can learn more about Kacey’s books and contact her via …
Website/Blog
Facebook
Twitter
Amazon
Email

One thought on “Illusions, The Arms of the Law-Book One Tour w/review 3/24”