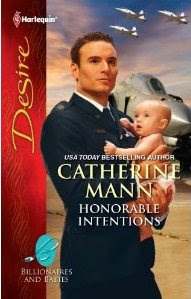 Major Hank Renshaw knows almost everything there is to know about Gabrielle Ballard. Except for what it’s like to touch her. Because Gabrielle is his best friend’s fiancee. Or she was. Until his buddy died in battle—right after making Hank promise to find her…

So now Hank’s in New Orleans. In Gabrielle’s home. Watching her nurse her infant son. It’s not honor that draws him to her. It’s not duty that makes him stay. It’s need he’s feeling, plain and simple— the desire to take the woman he’s always wanted and finally make her his own.

As most people know, I love my Harlequin’s and right now Desire’s are my “go-to” line at the moment.  There is something about a man and a woman and the desire that builds between the two of them throughout a story.  For this reader, sex is secondary to the actual sexual tension that has been building between the two characters.  Hank and Gabrielle have that in spades but also have so much more.

The story opens 10 months after his buddy, her fiancee has died.  Hank’s mission is to find Gabrielle and give her a message from her fiancee.  What Hank found was Gabrielle living in a small apartment with her infant son.  Knowing that he can’t leave them, he devises a plan to help her through her son’s surgery and to help her with some downtime from being a mother.  What neither one of them banked on is the desire that still burned between them and the intense need that they had for one another.

Hank is an honourable, yet somewhat clueless man when it comes to women.  Being a career military man, he’s not a relationship for awhile.  When he sees Gabrielle at your apartment, they only thing he can see is to take care of her.  Fulfill every woman’s desire to take a bath without interruption, sleep late and generally be pampered.  I’m a mother, I wish this too.  He didn’t count on her being so independent and not being able to let someone else help her.

Gabrielle is an intelligent, caring and stubborn woman.  After watching her mother be superwoman growing up, she feels like she has to be, too.  Hank tries to let her know that she doesn’t have to be that way.  Its okay to ask for help and to take it.  At times, I really thought I bop her in the head but it lead to great dialogue between the two.  Bravo!  What Gabrielle didn’t realize that not only was Hank trying to help her, he was also trying to woo her.  *sigh*

I really liked that their families played an integral part of their reluctance in being a full fledged couple.  Between Hank’s dad trying to help Hank with his feelings towards his dead buddy and his guilt and Hank’s step mother helping Gabrielle feel like a woman, the scenes were heartfelt and emotional.  When Gabrielle’s own parents showed up, Gabrielle soon found out that her mother was not superwoman and that she needed to learn how to appreciate Hank for what he was doing for her and her son.  Again, the scenes between her and her mother were great.  My own mother and I have had that same conversation.

I really need to go back and read the other Renshaw/Landis family books from Ms. Mann.  Again, the family dynamics on Hank’s side defined him as a man and within his relationship with Gabrielle.  Ms. Mann also tackles the subject of survivor guilt and PTSD with a deft hand.  The final scene between Hank and Gabrielle tugged at my heart, not only as a mother but as a woman.  I have my “Hank” and I won’t let him go.

I highly recommend Honorable Intentions.  At times, I got frustrated with their actions towards each other but in the end, their journey towards happiness with each other was well worth it.

And as a bonus, I’m giving away my copy of the book to one ramdom commentor.  🙂  Open internationally.