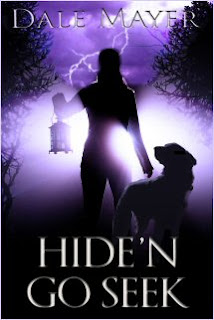 BLURB:
A twisted game of Hide’n Go Seek forces an unlikely alliance between a no-nonsense FBI agent and a search-and-rescue worker.
Celebrated search-and-rescue worker Kali Jordon has hidden her psychic abilities by crediting her canine partner Shiloh with the recoveries. But Kali knows the grim truth—The Sight that she inherited from her grandmother allows her to trace violent energy unerringly to victims of murder. No one knows her secret until a twisted killer challenges her to a deadly game of Hide’n Go Seek that threatens those closest to her.
Now she must rely on FBI Special Agent Grant Summers, a man who has sworn to protect her, even as he suspects there’s more to Kali and Shiloh than meets the eye. As the killer draws a tighter and tighter circle around Kali, she and Grant find there’s no place to hide.
Are her visions the key to finding the latest victim alive or will this cruel game of Hide’n Go Seek cost her…everything.

Twenty minutes later, Kali made her way to the kitchen. She fed Shiloh on the deck in the morning sunlight. Running her fingers through her shoulder-length hair, she remembered last night’s painting. She headed to her studio to take a look. She’d almost reached it when apprehension washed over her.
The door was closed.
She never closed the door after painting. It wasn’t good for the wet canvases, besides, the room only had a small window so the paint fumes built up fast. A frown wrinkled her forehead. Had she simply forgotten? She had been deadly tired last night.
Bolstering her courage, she pushed the door wide and flinched as the fumes rushed out almost stinging her nose. “Oh gross.”
Holding her breath, Kali crossed to the window, shoving it as far open as it would go. Fresh air surged into the small space. She’d love a huge studio, except painting wasn’t exactly a full time career for her – no matter how much she’d like it to be. It was a release for when depression and madness overcame her soul. Maybe later, when she no longer did rescue work, she could indulge her art as a creative hobby instead of as an outlet of pain and turmoil.
Walking around the easel, Kali stopped midstride.
The painting stood where she’d left it. With surreal and strangely enticing clarity, blacks and purples and browns popped off the canvas. Heavy paint splotched at places, then thinned and stretched across the top.
She stepped back and frowned. Up close, besides the heavy amount of paint, the picture resembled a distorted nightmare. Not surprising. Still, she caught a glimmer of an intentional design. She tilted her head and looked at it from a different angle. Nothing changed.
Sniffing the air, Shiloh ambled into the doorway.
Kali smiled down at the dog. “Not very sweet smelling, is it?”
She glanced back at the jumble of colors and stilled. There. She studied the abstract mess, letting the colors move and form to reveal the image hidden within.
Shivers slid over her spine.
Oh my God.
No way.
Kali blinked. It was.
There was no mistaking the image of a person buried under small bushes, civilization of some kind crouched on the horizon with a series of rough rock formations soaring behind the bushes.
“What the hell?” she whispered.
Kali was not a great artist, by any means. Blind escapism kept bringing her back to the process because it worked. She painted with wild abandon. The paint slapped on canvas with no thought discharged her emotions. For some reason it always worked.
And it always looked like shit. 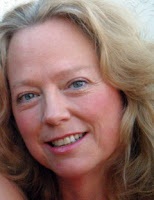 This, on the other hand, was ingenious. Sure the subject matter was gruesome; however, given her volunteer work, not unexpected. Especially after finding the letter.
The artistic abandon was still there. The paint was so thick in spots the picture was almost three-dimensional. The terrain had depth and movement. The light was dark and terse, yet still shone with gruesome clarity—and way beyond her artistic abilities.
“It’s fucking brilliant.”
It was also scary as hell.

ABOUT THE AUTHOR:
Dale Mayer is a prolific multi-published writer. She’s best known for Tuesday’s Child, her romantic suspense novel that was one of the final four in the Kensington Brava/Romantic Times contest this last year. Besides her romantic suspense/thrillers, Dale also writes paranormal romance and crossover young adult books in several different genres.  To go with her fiction, she also writes nonfiction in many different fields with books available on resume writing, companion gardening and the US mortgage system. She has recently published her Career Essentials Series in ebook format.
To find out more about Dale and her books, visit her at http://www.dalemayer.com. Or connect with her online with Twitter at www.twitter.com/dalemayer and on Facebook at www.facebook.com/dalemayer.author