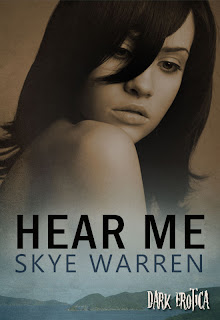 Title: HEAR ME
Author: Skye Warren
Length: 32,000-word novella
Genre/Heat Level: Dark erotica
ISBN: 9780988363205
Blurb:
She doesn’t remember her past, only her training. She can’t talk, not that a good slave should speak out of turn. None of that matters when she wakes up in the warm, rustic room. Her new master is distant but kind. There’s only one problem: he doesn’t want her.
Longing for the shackles of safety, she pulls from the last dregs of her will to prove her worth as a slave. It seems to be working. He responds first to her body and next to her submission. The secrets of his past haunt the cabin, fraying the tightening bond between Master and slave, but it is her own memories that may finally unravel it.
This book contains a bonus short story Escape, set in the same dark erotica world.
WARNING:
This book contains explicit scenes of sex, including dubious consent and captivity situations. The BDSM does not conform to literary conventions, making it sometimes more realistic, and other times not. This is a work of fiction not appropriate for anyone uncomfortable with these situations or anyone under the age of eighteen.

My review will be posted on Thursday.  Haunting story folks and that’s all I’m saying right now.

Excerpt 2 (Some sexual references)
In a reckless burst of courage, she reached out and put her hand directly on his cock. At first it felt like nothing, just the flat stiffness of his jeans. But then, there, it jumped beneath her palm, lengthened.
This was solid ground. She could arouse him, then she would get him off. Any way he wanted it, she had probably done it before, or she could learn. He would see her value then. It wasn’t exactly obedient to grope your Master without express orders to do so. The opposite, really, but she was desperate.
He put his hand on the top of her head, not pushing her closer or away. It was sweet, his hesitation, and she thought for a moment that he would let her get away with it. God, she would do anything. Please.
He gently pushed her hand away.
She wanted to live. How pathetic.
Tears fell in hot tracks down her cheeks.
“Someone really did a number on you, didn’t they?” he asked.
At his words, she looked into his eyes. Amazingly, they were filled with something like understanding. It was probably better that she couldn’t speak then, because she would have begged for him to help her. But she didn’t deserve his benediction. She’d failed.
“Here’s what we’re going to do.” He slid his hand around her neck, grasping her firmly from behind. She melted into the firm touch. “You’re going to sleep now. Stay off the floor. Nod for me.”

She nodded vigorously, her eyes downcast in joy.

His fingers still curled behind her neck, he swept his thumb along her cheek, then down over her neck. Back and forth, he caressed her. She stayed still, watching as her breath ruffled the dark hairs on his forearm.
He moved his thumb against her mouth then pushed it inside. She closed her lips around it, eager to suck it. He tasted of salt and earth and hope. This was her chance to touch him, to please him, to show him badly she wanted this.
She swirled her tongue around the tip, worshipping his thumb like she wanted to worship his cock. Like she wanted to lick every part of him, if it meant she could stay. The soft wet sounds filled the room, tangling with the harsh sounds of his breathing.
She begged with the warmth and wetness of her mouth. She implored with the skill of her tongue. Every swipe promised pleasure, if only.
He pulled his hand away.

Skye Warren writes unapologetic erotica, where pain and sex and love collide. She has been called “a true mistress of dark and twisted erotica” and her dark erotica series has reached the bestseller lists at Amazon and been a Night Owl Reviews Top Pick.