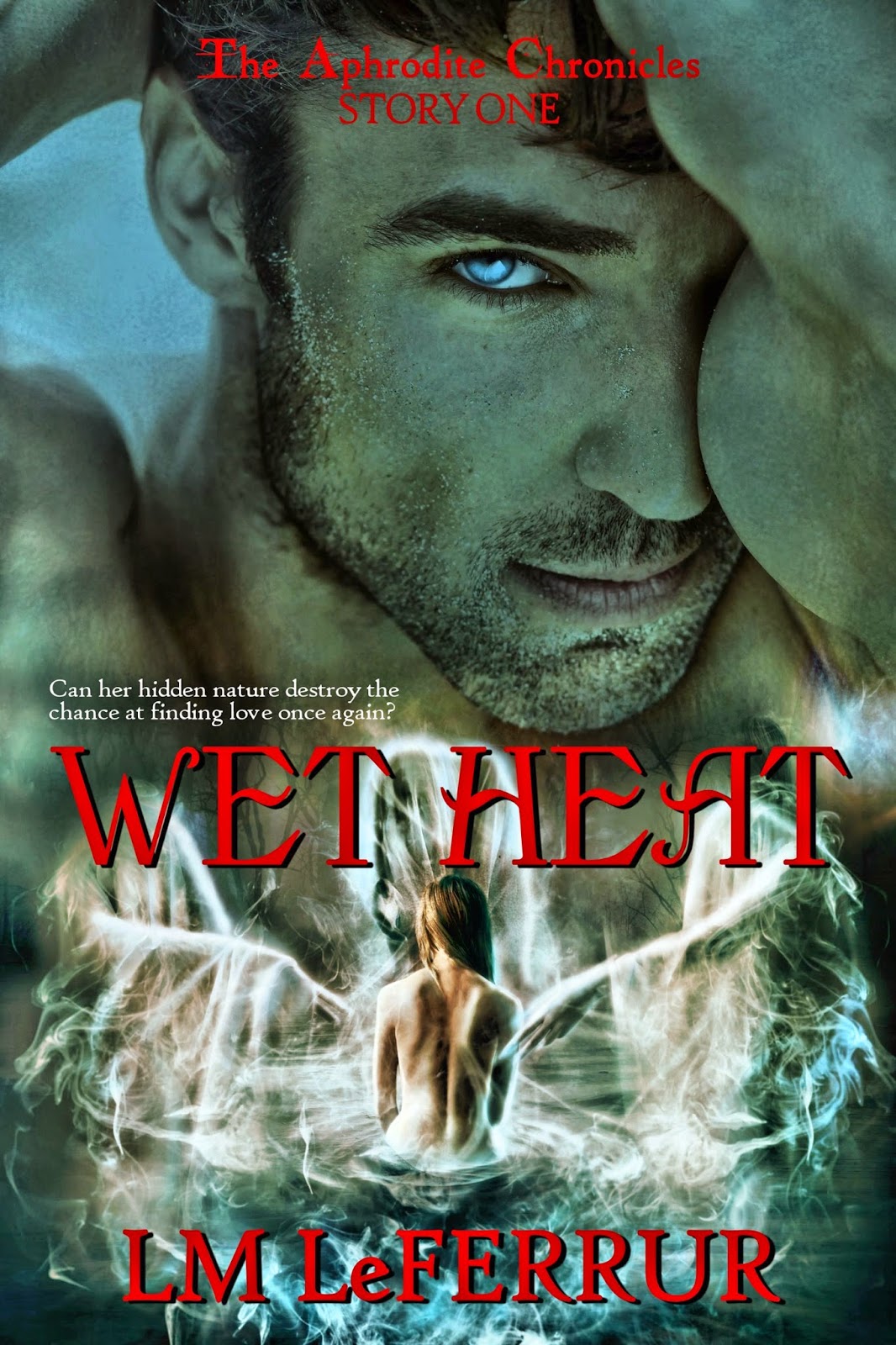 Wet Heat: The Aphrodite Chronicles Story One
Erotic Paranormal Short Story
Blurb:
Attorney Naida Bouche has a secret… of paranormal proportions!
The secret tore her, and fellow attorney, Coop’s, marriage apart. She let her guard down and allowed herself to love. But that love—and the passion that followed—could have been the death of them…well, him.
A chance encounter in judge’s chambers catapult Coop Martin’s and his ex-wife’s libidos into overdrive. Add being stuck in an elevator to the mix and desires explode. Coop wants his wife back but she’s thrown up a roadblock that he’s determined to break through.
Can their undeniable chemistry be enough for Naida to reveal who—and what—she is? And could Coop still love her should the truth be
revealed?
Excerpt
1
The last vestiges of summer
Second Chance, Pennsylvania
Water cascaded off her nude body. Small rivulets ran over her breasts and down her slightly rounded stomach, disappearing into the surface of the lake.
She was one with the water. She could, literally, become one with it. Moonlight reflected off the mirror-smooth surface, adding a soft glow to the night. Crickets serenaded her with their chirping song. A wolf howled in the distance. Nature cocooned her.
She grinned and dove under. Liquid embraced her, still heated from the sun’s rays of earlier in the day. Her body became insubstantial, fragmenting into molecules of H2O. Disorientation left her bewildered, but the feeling came and went. Weightless warmth enveloped her, and the ebb and flow of the tide lulled her into blissful relaxation.
The moon slid across the sky. Hours had passed. Her body became corporeal with a single thought. After regaining her human form, she cut through the water with powerful strokes and rose to the surface in a rush of bubbles.
The night air chilled her damp skin, raising goose pimples along her flesh. She pushed the long fall of golden blonde tresses from her face and glanced into the deep, lush woods that ringed the lake. Soon the leaves would change to shades of gold, orange, red, and brown. In would come the autumnal chill. Her time in the waters would decrease, and then winter would set in and freeze her out.
When that happened, she’d resort to the swimming pool located on the basement level of her large log home. Even with the greenery she had sprinkled about, it never fully replaced the exhilaration of the lake, the feel of fresh air against her skin, and the scent of the wilderness.
She repeated the cycle, year after year. The monotony had long since worn short on her nerves.
At one time, she’d had someone to break the mundane tones of her life.
But she had ruined that.
He hadn’t understood the need, the drive, to be one with the water.
She had allowed it to build a wall between them.
But how could he have understood? Hell, she’d have trouble believing the truth, if it wasn’t her life.
The root of their problems had been otherworldly, as her father was human and her mother was a water nymph.
The nymph side of her heritage presented two problems. First, she needed daily contact with a body of water. Like her pool in the basement. Second, she also needed a daily dose of sex. Preferably more than once a day. After all, the term “nymphomaniac” had been born of a nymph’s sex
drive.
No, he had never known the truth of her desires. She had pushed him away, afraid of exposing her real self.
And that fear, that uncertainty, had left her alone…and needy.
Buy Links:
Pre-Order:
Secret Cravings
Publishing- http://bit.ly/1D2VbrO
Amazon-http://amzn.to/13F0jpF
All Romance
E-books- http://bit.ly/1xtbXP6
Author Bio:
I’m a writer of sexy romances with a kick of heat! Though my contracted stories are paranormals, I haven’t discounted writing a
contemporary or two.

I live in Pennsylvania just a hair shy of the Maryland border. I live with a family I adore which includes two furry feline children and a furry canine daughter.

In my spare time, I’m more than likely watching television. I watch Bones, Blue Bloods, NCIS:New Orleans, or some sort of car show like Wheeler Dealers.

I’m a huge sports fan, football in particular. During the fall/winter, I’m watching Notre Dame or Penn State on Saturdays and the Saints or Colts on Sunday.

I’ve been known to have my nose buried in a book. Nora Roberts/JD Robb and Clive Cussler are favorites of mine. I know, I know…Clive Cussler isn’t a romance author. The man can weave a tale of adventure like no other!