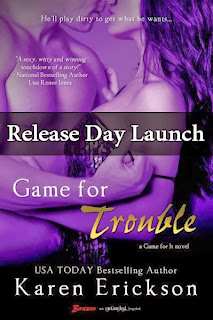 See below for all of the information on GAME FOR TROUBLE and Karen Erickson, as well as where to find her. We also have an excerpt for you. After reading the excerpt, make sure to go and enter the amazing giveaway below!

“Come in here.” She
grabbed hold of his hand and yanked him inside, shutting the door behind her
and twisting the lock into place. “Let’s stay in tonight. It’s cold out there.”
“But…wherever you
wanna go, darlin’, I’m game. My treat. You could order fifty lobsters for
dinner, and I won’t protest.”
She grimaced. “I
hate lobster.”
“You do not,” he
said, frowning. “You grew up here. You can pluck a lobster straight out of the
ocean from your dad’s deck.”
“Just because I grew
up here doesn’t mean I have to love seafood.” She scrunched her nose. How she
hated explaining this. No one ever got it. “I’ve never been a big fan.
Lobster’s sorta freaky. Crab is too much work, not enough reward. I don’t mind
shrimp, though. You can just pop them in your mouth and eat them.”
“I’ll take you out
for all you can eat shrimp, then. You can stuff your face until you wanna
burst,” he suggested eagerly.
Laughing, she shook
her head. “I don’t think so. I’d rather stay in tonight with you.” She sobered
up quick. The more they stayed in the better. This so- called relationship
needed to stay quiet. One mention of it to the media, local or bigger, and all
hell was going to break loose. As in, her father would have an epic freak-out.
“We always do that,
though. Stay in.” He scowled. “Aren’t you getting bored?”
Oh, no. “Are you?” God, he was already tired of her.
Really, she shouldn’t care. She should be glad. The faster she got rid of him,
the better.
Right?
“No. Hell, no. Anytime I’m with you is good, Will.”
He reached for her,
settling those big hands on her hips. Dipping his head, he bent his knees a
little so he could peer directly into her eyes. “Are you getting sick of me
yet?”
She pressed her lips
together to keep from saying what she really wanted. I could never get
sick of you. You’re the best thing that’s ever happened to me.
“No. Well. Your
constant sweet talk is getting sort of old.” She rolled her eyes, putting on an
act. Nothing Nick did when they were together was getting old.
His mouth curved
upward. “What are you talking about?”
“All the darlin’s
and the sugars and the princess remarks. I think you say that sort of thing so
you never have to worry about the name of the girl you’re with,” she teased.
His face turned
frightfully solemn. “You really think that?”
Uh oh. She shrugged. “I’ve wondered.”
“Really.” His
fingers bit into her flesh, he held her so tight.
“Maybe?” He had her
doubting herself. How did he do that?
Dope. He
constantly keeps you on edge.
“Trust me, I always
know who I’m with when I’m with you.” He kissed her—the softest, sweetest kiss
ever. So soft, so sweet, she immediately wanted to weep when he pulled
away to murmur against her lips, “Willow.”

He never called her
Willow. Ever. 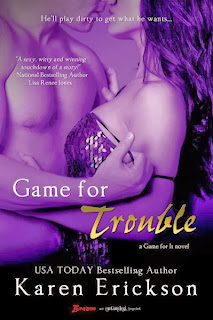 ABOUT GAME FOR TROUBLE:

He’ll play dirty
to get what he wants…
Willow Cavanaugh would be happy if she never saw cocky football star
Nick Hamilton again. Sure, their fling was the hottest she’d had, but he’s way
too much of a playboy to settle down with one woman. Plus, she’s got her heart
set on a piece of real estate for her catering business—and Nick owns that property.
Nick may be at the top of his game, but all he wants is a second chance
with Willow. When he offers to sell her his commercial space if she agrees to a
series of dates with him, their chemistry is so scintillating that jumping back
into bed seems like an inevitability. But Willow’s decided all’s fair in sex
and blackmail. Little does she know, Nick’s playing to win…and she’s the prize. 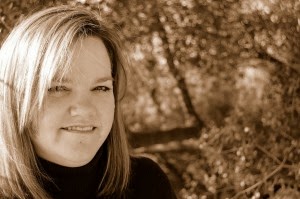