THE GAME OF HIS LIFE

Hockey player Ben Westmore has some serious skills—on and off the ice—and he’s not above indulging in the many perks of NHL stardom. When a night in Vegas ends in disaster, he realizes two things: 1) it’s time to lie low for a while, and 2) he needs a lawyer—fast. But the smoking-hot woman who walks into his office immediately tests all his good intentions.

Olivia Davis doesn’t need anyone derailing her career—or her dreams of starting a family—least of all a skirt-chasing player like Ben. But soon he’s unleashing a full-court press to convince her that he’s the real deal. She’s slowly falling for his sweet, rugged charm, but with so much on the line, Olivia has to decide whether Ben can truly change—or if he’s just playing the game.

“Relax,” he said smoothly, his gaze locked on hers, his expression soft, unfazed—the look of a man not dancing with the lawyer who could ruin his life or at least playoff season. She had to learn this guy’s secret, because there was no way he was this unaffected. Yet, his hands weren’t sweating the ways hers threatened to, and the only heartbeat she could hear thundering was her own.

She forced a slow and what she hoped was unobvious breath. “I am relaxed. I’m not the one who should be worried.”

The palm of his hand spread across the exposed flesh of her back and she prayed the tingling sensation in her spine didn’t result in goose bumps. “So you’re saying I should be?” he asked, turning them in rotation to the steady beat. Despite her resistance to this dance, her hips betrayed her by swaying in sync with his, and her feet kept time with his every step. He led with a silent authority that she was forced to follow. And for the first time in her life, she wasn’t hating giving up control.

He brought their joined hands between them and placed a finger to her lips.

Her heart all but stopped.

“Why don’t we save the shop talk for the courtroom? Let’s just enjoy this dance.”

She swallowed hard, but nodded. Dancing in silence, she could do that.

Unfortunately, Ben seemed eager to chat. “How long have you been practicing law?”

He expected her to remember stats as his hand on her back dipped slightly lower, his hold drawing her even closer? It had been far too long since she’d been enveloped in the arms of a man who felt and smelled so strong, so confident…How long would it be again if she went ahead with her plans for a baby? She pushed the thought aside when he stared at her, still waiting for an answer. “Twelve years,” she said, cutting out her time as a junior lawyer and intern, so as not to age herself. She knew from his online Wikipedia page that he was thirty-four, two years younger than she.

“If I say no will I get the inspirational ‘do what you love and it will never feel like work’ speech?”

She shook her head. “Actually, I really do enjoy my job.” She couldn’t say watching families get ripped apart by bitter divorces was something she loved without sounding like a sociopath, but she enjoyed her career.

“Can I ask why only professional athlete divorces?”

Ben laughed. “So one guy ruined it for us all, huh?”

She nodded then shook her head. “No. Everyday cases—with normal, everyday husbands and wives—just seemed a little too…real,” she said.

His blue eyes burned into her and his grip tightened on her hand. “So, guys like me aren’t real?”

She swallowed hard. He felt real…He felt more than real—he felt amazing. His arm wrapped around her felt deceivingly safe and his hand holding hers felt warm and secure. God, she could see herself giving in to these painfully real feelings…“You’re probably one of the more real ones,” she said, hoping he didn’t detect the slight quiver in her voice.

He nodded slowly as though unsure whether her words were a compliment. “Have you ever been married?” he asked, rotating them in time to the music.

“That’s crossing a line into personal.”

He smiled. “Guarded much?”

The effect of his smile from a safe distance was knee-weakening. This close, it was downright dangerous. She quickly averted her gaze to the other couples on the floor. “How long is this song anyway?” She felt trapped the way she had in tenth grade when Robbie Gropes-a-Lot Harris had tricked her into dancing with him at the winter formal to “November Rain”—the full eleven-minute extended version. Except Ben’s breath smelled minty fresh and not like tacos, and his arm draped across her lower back made every fiber in her being spring to life, making her want to flee for a completely different reason than the one Robbie had evoked.

“Do I make you uncomfortable?”

Damn right. And it should be her making him uncomfortable. There needed to be a power shift between them and fast. “Of course not.”

He pulled her closer. “You make me uncomfortable,” he murmured, his expression suddenly serious. Every inch of her body was pressed to his and she could barely catch a breath. Dancing was a really bad idea—a torturously bad idea. Being in his arms reminded her of all of the things she’d sacrificed for her career, of all the things she’d told herself she didn’t need…

“I don’t mean the divorce case. I mean you.” He touched her cheek and her skin burned. Thank God he was holding her so tightly because she couldn’t trust her legs.

Their stare locked and held for what could have been a lifetime, as everything seemed still and quiet around them.

The song had ended.

She yanked her hand free of his and stumbled away from him, inhaling a gulp of air into her deprived lungs. “Well, dance is over. I’ll…uh…see you.”

He nodded, the charming polite smile back on his face and for a second she wondered if she’d imagined the intensity in his gaze seconds before. “Goodnight, Olivia.”

Her own name sounded foreign coming from him. She longed to hear the sound again, and she was an idiot for wanting something so dangerous. The NHL’s biggest playboy had just worked his charm on her, and she’d lost all common sense.

She turned and headed straight for the table, leaving him on the dance floor.

She had to pull it together, but she also had to admit the unfortunate truth. Never before had she been tempted to kiss the enemy.

As most know, I worked for the Dallas Stars hockey team from 1999-2004.  I saw them win the Cup and then to watch in horror as Scott Stevens, Captain of the New Jersey Devils skate the Cup in our arena when they beat us.  To say that I’m a hockey fan would be an understatement.  So going into this series I realized that Ben played for the Colorado Avalanche (GAG!!!) and Asher played for the Devils (Double GAG!) and that I might have a problem cheering for them in their stories.

Ms. Snow knows her hockey and she doesn’t over do the hockey part of the story.  Whew!  Thank goodness for that.  However, I did like and appreciate her knowledge of the Cup, the keeper, and the superstitions.  In fact, the Stanley Cup finals are playing right now.  Go Nashville!  I also enjoyed seeing Jackson’s decision in Ben’s eyes and how Asher is doing.  Can’t wait to read his book next.  While the hockey references were great, the romance between Ben and Olivia sparkled.  I don’t think that I’ve ever read a romance where the hero had to work so hard for the heroine.  At times, I felt like Olivia pushed him away too much but once she was all in…she was in.  There isn’t much angst or conflict, just two people that aren’t really ready for love but it somehow finds them.

The pregnancy thread was real.  Unfortunately for me, I didn’t get the ending that I wanted.  However, watching Ben with Olivia at the bookstore was cute, funny and of so real.  My own husband was like that.  LOL!  Plus, I was a first-time mother at age 38 so the whole thread was a little too real but Ms. Snow handled it well.  Again, the romance in the book is off the charts.  Ben has to work hard to win Olivia and the end, it was sweet.  The driving lesson in the Hummer was the funniest thing in the book.  Or maybe seeing Abigail and Becky gang up on Ben.  Not sure but those two women had his number…good.

Overall, I love this series.  I’ve read a lot of books so far this year and Ben Westmore is my favorite hero right now.  Captain of the Avalanche no less…just don’t tell anyone.  I have a rep to protect.  I can’t wait to see how Ms. Snow is going to tell Asher and Emma’s story. 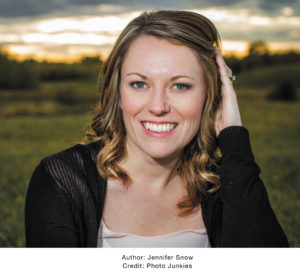