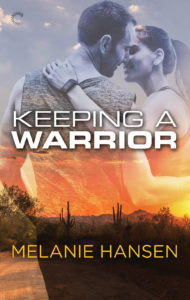 Devon Lowe is a survivor.

A survivor of war. Of combat. And of a betrayal by men she considered her brothers-in-arms. But her trailblazing work as a Cultural Support Team member working alongside the Navy SEALs is too important for her to back down now.

Fresh off a painful break-up, Air Force pararescueman Rhys Halloran recognizes Devon’s trauma for what it is—something that’s left her isolated, but far from irreparably damaged.

With Devon’s trust still lying shattered back in Afghanistan, putting her faith in a man who’s nursing a broken heart isn’t easy. But she’s tired of people making her feel weak, and Rhys makes her feel anything but, sparking a heated attraction that was never part of the plan.

With all eyes on Devon to prove herself in a brutal man’s world, having it all will mean putting her heart on the line like never before. But when it comes to Rhys, it’s an uphill battle she’s ready to fight.

Publisher’s Note: Keeping a Warrior deals with topics some readers may find difficult, including past sexual assault.

The night before, for the first time since he could remember, Rhys had fallen asleep with another woman on his mind.

The same woman now sitting and staring pensively at the plane. After a moment’s hesitation, Rhys gathered his courage and approached her, not sure of his welcome.

Devon glanced up with what looked like a genuine smile. “Not at all.”

Rhys lowered himself to sitting and drew his knees up, ankles crossed, loosely draping his arms around them. “You okay?”

With a shrug, Devon mirrored his pose and nodded at the plane. “Just sitting here trying to analyze my feelings.”

“I can imagine those are some pretty complicated feelings,” Rhys said gently.

“Yeah, well, I’m in a totally different place now, at least. Back then I was so idealistic, so trusting, so goddamn stupid.”

“I thought that bad things couldn’t happen to me, or if they did, it’d be something heroic, you know? Not—” She shook her head. “And now all I want to do is reclaim that part of myself that someone else took from me.”

A lump rose into Rhys’s throat at the slight quaver in her voice.

“Well, this time around you have me,” he said fiercely. “You have the guys.” He nodded his head toward Matt and Shane, who were leaning against a nearby wall, arms crossed, each with one booted foot propped against it, heads close together.

Devon smiled when she saw them. “Think they worked everything out?”

Rhys was about to say he hoped so when Matt pushed off the wall. As he did, Shane snaked his hand behind him and gave his ass a firm pinch, followed by a discreet pat. Matt elbowed him, hard, but he was smiling while he sauntered away.

He and Devon snickered together, and she bumped him with her shoulder. “You’re right. It’s gonna be different this time, for lots of different reasons.”

I love talking about my research because I love to do it! Researching a topic is my favorite part of writing a book. The first thing I do when I decide on a subject to write about is open a draft email. That’s where I keep links to articles that I find, or ideas that pop into my head, or even snippets of dialogue. I like draft emails because then it’s available to me across all my devices—from my work computer to my phone to my iPad. It’s always at my fingertips to add to because I never know when inspiration will strike. A lot of times the best dialogue comes to me when I’m driving and listening to music. The minute I stop at a light, I can whip my phone out and jot it down in my draft email in a few seconds.

Another thing I love to do is read non-fiction books or blogs authored by people in the profession I’m writing about, or who have directly experienced the topic of my story. That way I can get a feel for the vocabulary used in the job, the culture around it, and some of the things they experience or feel while performing it. An example of this is the military. I read military non-fiction voraciously, especially since I’ve never served and never will. Because of my reading, I have a good feel for that way of life. I do try to stay away from military fiction, especially romance, because I don’t want another author’s writing to influence mine.

The last—and best!—thing I do for research is listen to podcasts hosted by people in my characters’ professions. There’s nothing like hearing about it in someone’s own words, from their own mouths and in their own voice. The perfect example of this is with Navy SEALs. There are some excellent podcasts hosted by ex-SEALs, and I learn so much about the culture from them. They share anecdotes, and use their internal terminology, and all of that really helps me add authenticity to my stories. Not to mention, they’re just fun to listen to!

So that’s a little bit about my research! Thanks so much for hosting me today!

This is my first book by Ms. Hansen and I was very impressed.  I will admit that went to Amazon and read some of the reviews on her other books.  And no, I didn’t cheat and read the reviews for this book.  I wanted to be surprised and Ms. Hansen did surprise me.  First with her writing.  It is smooth, she has certainly done her research and she takes her time with her characters and their development.  Her characters are some of the more fleshed out that I’ve read in a long time.  Devon and Rhys could be your next-door neighbors.  I love how Ms. Hansen let them get to know each other first, become friends and then lovers.  She took her time with them and let me tell their story.  Even Shane and Matt were well-drawn secondary characters.  And yes, their story is the first book in the series.

I will have to say that what Devon went through, off the page, is something that needs to be talked about and sadly it’s not.  The military is still a boys club and women shouldn’t have to put up with that at all.  How Devon coped with it and ultimately dealt with it was great.  It didn’t define her and when she realized that not military men are pigs, she developed real relationships with them.  Also, Rhys was there for her as a friend and comrade to help her through her self doubt at times.  Oh, she can totally take care of herself.  Just wait and read.  That’s what makes the romance work in the book.  Rhys had enough to deal with concerning his ex and didn’t know what to think of the feelings that he was developing for Devon.  Devon was very upfront with him from the beginning and it just worked.

Some of the other content is set in a combat zone and Ms. Hansen doesn’t sugarcoat it.  While this is a military book, she doesn’t use it as a backdrop for the characters and the relationships formed from it.  Again, I can not talk enough about the characters in this book.  I wish they were my friends in real life.  They genuinely care about each other and not just when they are on a mission.  I read a lot of military romance books and Ms. Hansen has really nailed the genre with just this one book that I have read.  I don’t need to know all the “secrets” that the military does but a general understanding is good and that’s what Ms. Hansen will give you.  Her characters and their stories are more important.

I just fell in love with Rhys and Devon.  Their romance is slow, sweet and bit sexy.  I appreciate the fact that they took their time before hitting the sheets and let their relationship take its time.  Also, Matt and Shane took a piece of my heart, too.  And yes, I bought the book.  I just have to know the backstory and those two.  Do yourself a favor and read this book.  You will believe in the power of healing yourself and letting love in to help you heal, too.  Most importantly, did I mention that Rhys is a redhead? 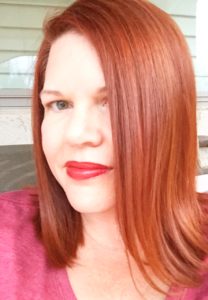 Melanie Hansen doesn’t get nearly enough sleep. She loves all things coffee-related, including collecting mugs from every place she’s visited. After spending eighteen years as a military spouse, Melanie definitely considers herself a moving expert. She has lived and worked all over the country, and hopes to bring these rich and varied life experiences to the love stories she gets up in the wee hours to write. On her off-time, you can find Melanie watching baseball, reading or spending time with her husband and two teenage sons.

Melanie Hansen will be awarding a $25 Amazon/BN GC to a randomly drawn winner via rafflecopter during the tour.