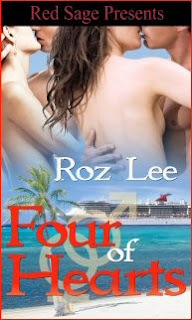 Roz Lee has been married to her best friend, and high school sweetheart, for over three decades. These days she splits her time between their home in rural New Jersey, and Southern California, where her husband works. Even though she’s lived on both coasts, her heart lies in between, in Texas. A Texan by birth, she can trace her family back to the Republic of Texas. With roots that deep, she says, “You can’t ever really leave.”
Roz and her husband have two grown daughters they couldn’t be more proud of, and are currently raising an eleven-year-old Labrador Retriever, Betty Boop, who isn’t aware of her canine heritage.
Email – authorrozlee@gmail.com
Website – www.rozlee.net
Book Website – www.FourOfHearts.weebly.com
Blog – www.authorrozlee.blogspot.com
Facebook – www.facebook.com/authorrozlee
Twitter – www.twitter.com/Iwriteromance

10 thoughts on “Four of Hearts Tour”