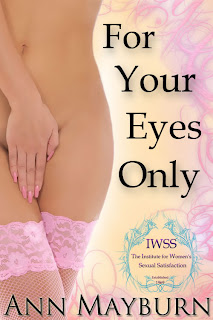 Amanda accepts an invite by the prestigious Institute for Women’s Sexual Satisfaction. Volunteering for their study means she must divulge her deepest, naughtiest fantasies and then act on them. But one wicked fantasy involves watching her boyfriend do something so intimate, so forbidden that she’s afraid he will refuse and may even break off their relationship.

Jared can’t believe his gorgeous girlfriend wants to see another woman take his anal virginity. But he wants to make her wildest fantasies come true, and maybe finally engage in some secret fantasies of his own…
Warning: This story contains a loving couple indulging in some very steamy fantasies including F/F kissing and light touching along with a deliciously naughty F/M/F pegging scene.
Review:
Oh my…hmmmm..*fans self* Puts laptop down to find out where hubby is…damn it, he’s on the computer.  Well, he won’t be on the computer for much longer.  *wink*
Lord, this book is hot.  No, really scorching hot.  Be warned, you WILL need your partner, batteries, a hose and a cigarette after you read this story.
Ann does it again with her short story For Your Eyes Only.  The premise is simple; Amanda has a fantasy and when she is accepted to the institute to live out her fantasy, she only hopes that she doesn’t lose Jared in the process.
I love, just love stories that revolve around established, loving couples.  I like to read about couples and the fantasies that they have with one another.  Just because a couple is married or has been together for awhile doesn’t mean that they don’t have fantasies with each other.  I’ve been with my hubby since 1999, married since 2004 and I still think he’s hot and I would marry him all over again.
I highly recommend this short story to see how one woman’s fantasy turns into reality.
5 Harlie’s and I can’t recommend this book enough!
Harlie

9 thoughts on “For Your Eyes Only by Ann Mayburn-Review”