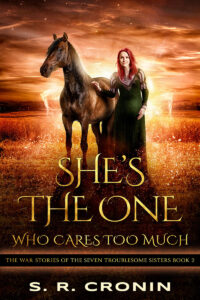 She’s the One Who Cares Too Much

(Book Two of the War Stories of the Seven Troublesome Sisters)

Coral, the second of seven sisters, has been hiding her affair with the perfect man until her older sister can get her life together. But the perfect man is getting impatient and now she’s gotten pregnant. Coral decides it’s time to consider her own happiness.

But what does she want? The perfect husband turns out to be less than ideal. She adores the small children she teaches but the idea of being a mother fills her with joy. Meanwhile, her homeland is gripped by fear of a Mongol invasion and she can’t stop crying about everything now that she’s with child.

Then a friend suggests the ever-caring Coral possesses a power well beyond what she or anyone else imagines. Does she? And why is the idea so appealing?

When Coral’s big sister loses faith in the army and decides to craft a way to use magic to save Ilari from the Mongols, she decides Coral’s formidable talent is what the realm needs. Can Coral raise a baby, placate an absent military husband who thinks he’s stopping the invasion, and help her sister save her homeland?

The brigands never showed up. The Svadlu concluded the thieves had seen soldiers moving in to protect the school and had elected to flee the realm with the little they’d stolen from a few farms in Gruen the day before. At any rate, after an afternoon of hiding in the hay, we were allowed to come out.

Davor sent most of his soldiers back to Pilk, leaving a few to stand guard through the night.

“Do all the children return home each day?” he asked.

“Most do. A few stay over for various reasons. We teachers take turns spending the night with any left behind. With winter here, more will stay. In bad weather, the barn is nearly full and all the teachers remain. Why?”

“I wondered if perhaps you’d be spending the night?”

“Oh. So does a new husband expect you home soon?”

“I’m single, sir.” I felt the flush in my cheeks at his question. Of the seven girls in my family, I’d been the one cursed with flaming hair no one could ignore and a fair skin that turned warm and pink at the slightest embarrassment. “I live with my parents. My family never knows whether to expect me or not, given the situation.” I tried to force the heat back out of my cheeks.

“I see.” His smile widened. “I travel with a tent befitting my station. I know it would be a tad peculiar, but under the circumstances, could a Mozdol of the realm offer a beautiful young woman…,” at this he reached out and ran his fingers through my silky orange hair “… a toast to her bravery and her assistance during a difficult situation?”

A Mozdol? This man was more than a soldier, more than an officer. I’d been flirting with an honorary prince of the realm, a fighter who’d received this high honor for his bravery in battle. Oh my.

My heart skipped a beat. I looked closer. He was years older than I, his skin weathered by time in the sun. He was stocky and strong, although a bit short for a man. He had a full head of gorgeous shiny black hair, though, and dark eyes that spoke of mystery. I liked him. 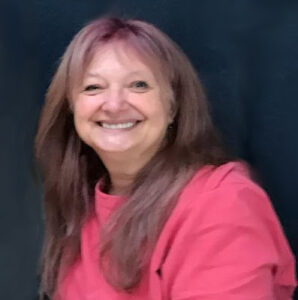 Sherrie Cronin is the author of a collection of six speculative fiction novels known as 46. Ascending and is now in the process of publishing a historical fantasy series called The War Stories of the Seven Troublesome Sisters. A quick look at the synopses of her books makes it obvious she is fascinated by people achieving the astonishing by developing abilities they barely knew they had.

She’s made a lot of stops along the way to writing these novels.  She’s lived in seven cities, visited forty-six countries, and worked as a waitress, technical writer, and geophysicist. Now she answers a hot-line. Along the way, she’s lost several cats but acquired a husband who still loves her and three kids who’ve grown up just fine, both despite how odd she is.

All her life she has wanted to either tell these kinds of stories or be Chief Science Officer on the Starship Enterprise. She now lives and writes in the mountains of Western North Carolina, where she admits to occasionally checking her phone for a message from Captain Picard, just in case.

R. Cronin will be awarding a $20 Amazon or B/N GC to a randomly drawn winner via rafflecopter during the tour.

3 thoughts on “Exclusive Excerpt from She’s the One Who Cares too Much (Book #2 of the War Stories of the Seven Troublesome Sisters) by S. R. Cronin w/a rafflecopter giveaway! #historicalfantasy @cinnabar01”