This post is part of a virtual book tour organized by Goddess Fish Promotions. Camille will be awarding a lovely pen and notebook to a randomly drawn winner. Click on the tour banner to see the other stops on the tour. 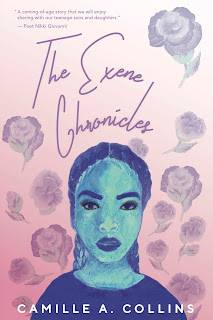 Camille A. Collins’s lyrical debut novel speaks to the passionate engagement of adolescent girls—with music, with injustice, with love, with life. This is a courageous coming-of-age story, one that poet Nikki Giovanni recommends “sharing with our teenage sons and daughters.”

It was not the paper doll cutout, but Exene’s actual mouth that Lia imagined, twisted into a snarl, blaming her. ‘It’s you, Lia! It’s all your fault what happened to Ryan!’ Because Lia’s mother had woken her to say Ryan never made it home the previous night. Fraught with worry, Mrs. Green had already phoned the police, and Lia’s first thought was that Ryan must be dead.

Right away, Lia found the only way to deal with the worst possible scenario was to confront it head-on, to embrace it as though she were cradling in her arms a soft kitten. Lia’s rendition of the death of her very best friend was not especially morbid, or as gruesomely detailed as it might have been. It was the quixotic rendering of a burgeoning poetess.

At the very least, Ryan deserved the grandeur of theater. So Lia envisioned the most enchanted garden, a neat little knoll of green, green grass nestled beneath an elegant magnolia tree in full bloom. That graceful magnolia would weep its ripe, inflorescent tears down onto a grand mausoleum. Ryan’s body would lie inside, near the hollow mouth of her final abode, a structure built of the finest marble, festooned with chiseled hearts, and inside those hearts would be inscribed eternal valentines proclaiming, “Ryan we love you” and “Forever in our hearts,” all with floating cupids, their arrows shooting heavenward. Ryan’s body would lie cold, her skin luminous, enlivened by the candent glow of four flaming torches, bathing her heart-shaped face in a delicate nimbus of pale yellow light. Her body would be covered by a white linen sheet, and nestled against the slope of her shoulders and the tapering silhouette of her waist and legs would be flowers: orchids and white roses, failing in all their beauty to compare to Ryan’s infinitely ravishing, cold, dead grace. Lia’s short reverie was disturbed by her mother’s persistence—Mrs. Payne stood in the doorway of Lia’s bedroom with a hand on her hip. “Baby, you’ve got to get up. Don’t be scared now. The police just want to talk to you about what you and Ryan did last night.”

About the Author: Camille A. Collins has an MFA in Creative Writing from The School of the Art Institute of Chicago. She has been the recipient of the Short Fiction Prize from the South Carolina Arts Commission, and her writing has appeared in The African-American National Biography, published by Harvard University and Oxford University Press; in The Twisted Vine, a literary journal of Western New Mexico University, and other places.

One thought on “Excerpt from The Exene Chronicles by Camille A. Collins w/a rafflecopter giveaway! #youngadult #contemporary #debutauthor”