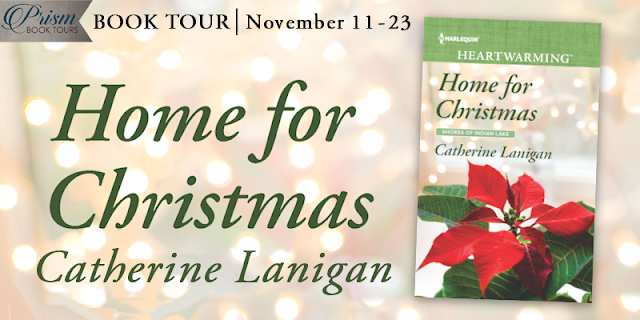 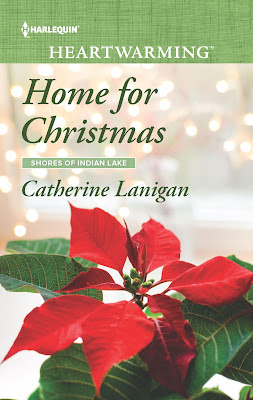 Can a magical Christmas under glass…

…bring them back together for good?

Widowed dad Adam Masterson still doesn’t understand why Joy Boston left Indian Lake and broke his heart all those years ago. Now she’s returned to sell her grandfather’s beloved poinsettia greenhouse—and Joy and Adam’s connection is as strong as ever. But Joy has a life in New York. And Adam has only until Christmas to convince Joy that she belongs in Indian Lake—with him.

Adam pulled up to the bank. He put the truck in Park and turned to her. “What are you asking me?”

“Have you got an ulterior motive, Adam Masterson? Because if you do, it’s time to lay your cards on the table.”

“Initially, I wanted to show you that Indian Lake wasn’t the hall of horrors you thought it was. That the people here were wonderful and loving and that maybe you could come to need them.”

“The more I’m with you, I have to admit, maybe my motives have changed.” He unbuckled his seat belt and leaned forward to put his hand on the back of her nape.

When his lips met hers, she had every intention of pushing him away, venting more anger at him, but she didn’t. This wasn’t a kiss born of fond memories or a teenage crush; this was passion and eagerness. This was a kiss of now and his need for her in this moment. His fingers slid up into her hair, cupping her head, capturing her. He slanted his mouth over hers and deepened the kiss. He breathed her in as a faint moan hummed in his throat. Joy was lost like she’d never been, not even when they were kids. Back then, his kisses had been tender and playful. But this was desire and possession.

As she responded to Adam’s kiss, holding him fast, she wondered if every decision she’d ever made in her life was a mistake.

ADAM BROKE FROM the kiss, reconsidered and kissed Joy again. Then he held her face in his hands, realizing she’d never taken her hands from him.

“I’m not gonna say I’m sorry. I’ve been wanting to do that since the day you came back here.”

“You kissed me before.”

“Don’t say it. Not right now. I don’t want to think about New York or your other life. This is just us.”

“But it’s not,” she whispered and dropped her hands.

He let his hands fall to her shoulders, still reluctant to let her go.

“I don’t want to do anything that would make you distrust me or make you uncomfortable, and the fact that, apparently, empirically I’ve done both…” He sighed heavily. “I won’t let it happen again.”

“No. Yes.” He laughed and fell back against his seat. He closed his eyes and leaned his head against the headrest. “You don’t know what you’ve done to me.”

“I wouldn’t exactly say that,” she replied. “As of two minutes ago, I have a much clearer picture.”

He slid his eyes to her. “You kissed me back.”

She hung her head and looked up at him with recalcitrant eyes. “I did.”

He lifted his hand and tapped the steering wheel with his forefinger. “So, would I be out of line to ascertain that you might be feeling the same thing I’m feeling?”

She leaned against the door.

Trying to move away from him?

“Adam, I have to be honest. I don’t know what I feel. I’ve gone from shock over Grandpa’s death, to grief, which is almost choking me, to wondering why everyone here is so nice to me, to remembering you and me when we were in high school, discovering you have a son, whom I can tell you I love already.”

“You do?” Adam was a bit surprised. Not that people didn’t love Titus. He was a special kid. But Joy didn’t have much exposure to children, not even a younger sibling.

And yet she protected and watched over her flowers. He’d caught her in the greenhouses talking to the plants, singing to them as if they could hear her and respond. Perhaps she had more motherly nurturing instincts than he gave her credit for.

If she loved his son, did that mean she loved him again? He didn’t want to hear her answer.

His world had been upended. If he were honest with himself, he’d needed her to reopen the greenhouses so that he could test his geothermal design for Hal Slade, his investor.

But even that wasn’t the reason he’d cajoled her into this move.

If she’d left town, he would have paid to have the glass panes replaced anyway. He would have finished the system, turned it on without anyone’s knowledge, read his results and sent them to the investor.

No, Adam was more underhanded than that.

By now, yall are probably sick of me singing the praises of the Heartwarming line by Harlequin.  Too bad because Ms. Lanigan has proven time again how much I love this line and especially Ms. Lanigan.  What is there not to love about Indian Shores?  You have the town resident, Ms. Beabots that drips in Chanel and seems to be the town matchmaker, to all of the other characters that have had their stories told, Joy and Adam were a welcome addition.  This is a second chance romance that had a bit of sadness about it.  No worries though.  The sadness is not overwrought in the book.  You already know that Adam is a widower raising his son Titus and Joy is back to sell your grandfather’s greenhouse.  It’s just that there is something else that broke them up earlier that was even more troubling.

I won’t go into detail about that little nugget but I was boiling mad just like Joy was once the details of it came out when she came back to town.  I don’t care if the town has residents that have money and influence over a town.  People die and when you know that something can be done to prevent it you take action.  Not cover it up or say that it can’t be done.  Old bitty…yes, I said that.  I don’t speak ill of the old.  Grrr…anyway, watching Adam and Joy work together to get the greenhouses ready for sale, it takes on a life of its own.  Their friends (characters from the other books in the series) take over and you see the joy that it brings not only to them but to Joy.  She realizes that she has to let go of the past and realize to have a future with anyone, is to face the truth and to see that she was the one that was wrong in the past.

Adam is a sweetheart.  Raising a tornado of a son, Titus, I can see why he was careful with him but he also needed to see that someone could love Titus for who he was and that person was Joy.  Losing his wife was hard enough but he was a bit overprotective when it came to Titus.  Adam knew all along that Joy still had feelings for him but he just had to prove to her that she didn’t need New York, that her life in Indian Shores could be just as fulfilling.  Especially with him.

Yall, this book had all the feels.  I got caught up with all my friends from the other books and it warmed my heart to see them come together for Joy and Adam.  Sometimes it does take a village and it was evident here.  LOL!  Oh my goodness, seeing Jules talk in French!!!!!  I just wanted to hug that baby.  (His Baby Dilemma is the book)  Plus, I loved the interaction between Mica and Adam.  You have to understand that Adam is a borderline genius in physics, engineering and went to college with Mica.  I loved that connection in the book.  Plus, knowing that Joy and most of the women in the book were childhood friends.  They never judged Joy for running when she did.  All they wanted to was for Joy to understand that life in Indian Shores can be fulfilling, too.

If looking for a feel-good second chance romance with the backdrop of poinsettias, this is for you.  Adam and Joy are ranking up there as one of my favorite couples in Indian Shores.  Mica and Grace, you have competition.  Thank you, Ms. Lanigan, for this book.  It is what I needed for the start of the holiday season.  Plus, Jules…oh my… 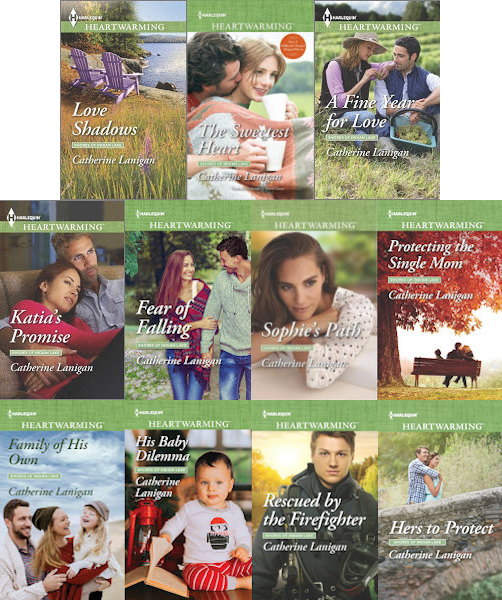 Catherine Lanigan is the international bestselling and award-winning author of over forty-five published titles in both fiction and non-fiction, including the novelizations of Romancing the Stone and The Jewel of the Nile. Ms. Lanigan’s novels have been translated into over twenty-four languages. Lanigan was tasked by the NotMYkid foundation to pen a collection of compelling and informative true stories of teen addicts. Ms. Lanigan’s SHORES OF INDIAN LAKE series for HARLEQUIN HEARTWARMING includes LOVE SHADOWS, HEART’S DESIRE , A FINE YEAR FOR LOVE, KATIA’S PROMISE, FEAR OF FALLING, SOPHIE’S PATH, PROTECTING THE SINGLE MOM, FAMILY OF HIS OWN, HIS BABY DILEMMA, RESCUED BY THE FIREFIGHTER and HERS TO PROTECT (2019).

Ms. Lanigan is a frequent speaker at literary functions and book conventions as well as inspiring audiences with her real stories of angelic intervention from her Angel Tales series of books. She is an outspoken advocate for domestic violence and abuse and was honored by The National Domestic Violence Hotline in Washington, D.C. She has been a guest on numerous radio programs including “Coast to Coast” and on television interview and talk show programs as well as blogs, podcasts and online radio interview programs. She writes a monthly blog for Heartwarmingauthors.blogspot.com. 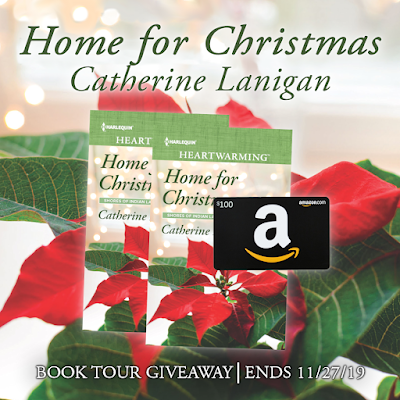 – One winner will receive a $100 Amazon eGift Card (open internationally)
– Two winners will each receive a signed copy of Home for Christmas with a bookmark (US only)
– Ends November 27, 2019