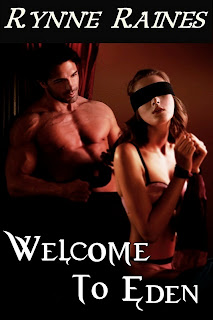 
Within the walls of Eden, temptation rules and anything goes…

Psychiatrist Caitlyn Ward never imagined setting foot inside the hottest fetish club in Los Angeles until the day a patient’s concerns about sexual desires went beyond her expertise. Now, determined to uncover the answers needed to alleviate her patient’s mind, Caitlyn ventures into a world of dark and forbidden pleasure beyond her wildest dreams.

I can not tell you how many times I have read this book.  At least a dozen times and I still find something new every time.  Caitlyn is a no nonsense psychiatrist that has been stumped on how to help one of her clients.  What she didn’t expect to find was that she had secret desires that even she didn’t know she had.

While the scenes are beyond hot, its the emotional openness that Evan and Caitlyn have with each other that is priceless.  Caitlyn is way above her head when she enters Evan’s club but by the time she leaves, she is in too deep.  Evan can not believe his luck when he finds the perfect submissive and the perfect partner for life. 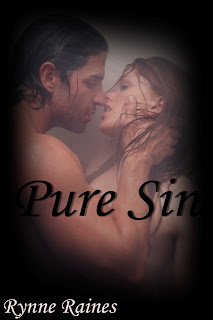 Whips. Blindfolds. Restraints. And a man rumored to be the most skilled Dom in the city… As the BDSM instructor at the hottest fetish club in Los Angeles, Bianca Alexander prides herself on being open, honest, and informative with her clientele when it comes to kink. The fact that she hasn’t knelt before a master of her own in four long years doesn’t affect her ability to teach, though a part of her longs to be back in her Dom’s arms. But when her boss hires Cade Sinclair–her primary rival from a competing club–to assist teaching her classes, Bianca’s comfortable solo act becomes a sinful duet drenched in Pure Sin.

I was intimidated at first by this book.  I know, I know, I read Welcome to Eden many times before but the blurb scared me.  Weird, huh?  Well, there is nothing to be scared of in this book.

Bianca is my kind of woman.  She is bold, ballsy, honest and a little emotionaly scared from an innicendent that happened four years ago with her Dom.  When Evan approaches her about teaching a class with Cade, she is beyond speechless.  Professionally, Bianca knows that she can handle Cade but personally, she not so sure.  Cade is the Dom that she left four years ago and still holds the emotional scars to prove it.  Cade is one skilled Dom.  He knows that to have Biance kneel before him will take some time and time is all he has.  He is patient, kind and knows exactly what he wants.

The dialogue, misunderstandings, lies from the past and the emotions that Ms. Raines brings to the table between Cade and Bianca make this book one to read over and over.  The scenes between Cade and Bianca are beyond hot but are tender too.  Cade knows what Bianca needs and Bianca knows how to make Cade lose control.  The twist at the end made me want to reach in the book and slap someone upside their head but I couldn’t.

5 Harlies and a recommend read 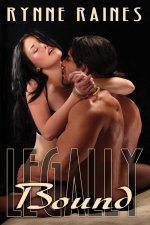 Evelyn Morgan has a secret. Donavan Carver wants to expose it. Bondage, debauchery, and a weekend at Eden lands one of them on their knees.
For years, Eve has craved sexual domination, but a kinky romp in the hay isn’t worth destroying her prestigious legal reputation over. Even if that romp’s with her handsome rival and legendary Dominant, Donavan Carver. Desperate to protect her secret and keep the notorious playboy at bay, Eve clings to the lie she’s told for two years—she’s a Domme. Donavan doesn’t buy it. Given an opportunity to put Donavan’s doubts to rest, Eve lures him into a bet he can’t win–one that will tether him to her leash. So what if she cheats to win? He’ll never find out. Or will he?
Review:
This book was a little harder for me to review.  Don’t get me wrong, I loved it but it didn’t hold my interest as much as Welcome to Eden or Pure Sin.
Evelyn and Donavan have been frenemies since their college days and once again, they are on opposite sides of the chair on a case.  When Evelyn finds the evidence that would help her client win, she bets Donavan one weekend at Eden that he is her’s to do with as she pleases.  Donavan sees past the lie and realizes that she is a submissive to the core.  He plays along with her game until he realizes that he has been played.  Once, they enter Eden, all bets are off for Donavan.
Donavan has craved Evelyn since college but she has always kept him at arms length.  She has her reasons and Donavan is determined to break through her reasons.  Evelyn has always known that she craves domination in the bedroom and what scares her the most is that Donavan is the perfect Dominant for her in and out of the bedroom.  This is where I kinda lose some interest.  Some of the BDSM scenes at the club felt a little rushed to me and over the top.  Okay, I don’t live the lifestyle so I might be talking out of turn but I didn’t feel like I was in the scenes as much as I was in the first two books.  Trust me, the scene in the big playroom was totally hot and very necessary, I just felt like I was disconnected in the private scenes between them.

Now, the dialogue between Donavan and Evelyn was emotionally charged and heartfelt when they dropped the facade and really got the heart of why they were there at Eden.  The scene between Caitlyn and Donavan is priceless and it was nice to see a familar face.  I really did like Donavan and Evelyn and this book is definitely on the keeper shelf.  Maybe I just need to re-read it again to get a better feel of the private scenes between them.

I highly recommend Legally Bound and the ending was perfect and a fit beginning to Donavan and Evelyn.