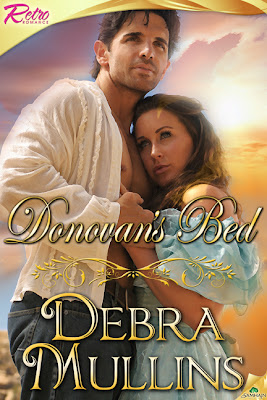 In this battle of the sexes, the ultimate prize is love.

Sarah Calhoun is bound and determined to restore honor to the family name the only way she knows how—make her late father’s newspaper, the Burr Chronicle, the most successful in the Wyoming Territory.

Haunted by past scandal, she knows one misstep, one misunderstanding, could bring disgrace back down on her head. Yet that doesn’t stop her from running an article about the insulting Jack Donovan. The blasted man is shopping for a wife as he would a horse!

Jack finally has the house in the kind of town he’s always dreamed about. Now all that’s missing is a wife. At first, he thinks Sarah’s scathing article about his quest is a good thing—until he finds himself hounded by hordes of young girls, spinsters and widows. Still, he can’t stop thinking about the sassy newspaper editor who started it all.

Sarah is as determined to ignore her impossible attraction to Donovan as she is to uncover his mysterious past. But the harder she digs for his secrets, the deeper he hides them. Until there’s only one rock left unturned. His heart.

Sarah Calhoun is a feisty, funny and independent woman that *gasp* has a job in her town.  She loves her job and her town.  On fateful mistake in her teens as labeled her a harlot in the town and the gossips won’t let her forget about it.  She feels like she still has to atone for this mistake.  When the mysterious Jack Donovan shows up in town with money and a past that he won’t talk about, the reporter in her seeks the truth.  The woman in her awakes and trying to separate is easier said than done.  Sarah is a fascinating woman.  Strong in her resolve that she will always be tainted and never marry but soft and tender when it comes to Jack.  He brings things out in Sarah that she thought were long dormant.

Jack Donovan is a man with a past that he is not necessarily proud of but he wants it to stay buried.  He did what he did to survive and was good at it.  It was a means to an end.  When he decided to leave that life behind and settle in Wyoming Territory, he made his mind up that he wanted a home, children and a wife.  He never thought that Sarah, a working woman, would be that woman.  His conflicted thoughts and emotions regarding Sarah were honest and led to some of the funniest moments in the book.

The scenes with Sarah and Jack were heartwarming, sexy and funny.  The more they tried to resist each other, the more the sexual tension built.  *sigh*  When Jack figured out that Sarah was exactly what he needed in his life, the chase was on for him to convince Sarah.  While this book was sexy in parts, the sexual tension build up was terrific.  Jack brought out in Sarah her passionate side that she had long denied but was a big part of her.  Sarah was soothing to Jack’s somewhat tortured soul.

The secondary characters especially Sarah’s sister, Suzi and the wounded marshall were well written.  I look forward to Suzi’s book in April.  The town that Ms. Mullin’s built is real and charming.  The townspeople were typical for the time but not caricature’s.  They were heartwarming and funny.

I highly recommend Donovan’s Bed for anyone looking for a sexy, heartwarming western historical that has captured this reader’s heart and I look forward to the next installment.