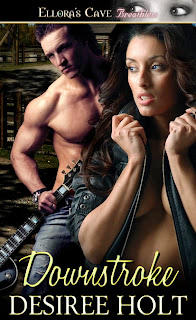 This month Desiree Holt celebrates her 100th release with Downstroke from Ellora’s Cave.  Downstroke is the story of lovers reunited after twenty years trying to bridge a gulf of bitterness while outwitting a killer.  To help her celebrate, I’m giving you a taste of one of her other books.  Leave a comment to be entered in the drawing at the end of the month for an Acer netbook.

I was excited beyond words for the chance to host Desiree today.  When I choose Once Upon A Wedding as my book to showcase, I was even more excited when it wasn’t picked by anyone.  I loved, loved, loved this book.  There is passion, emotions, sex and alot of it, misunderstandings and its full of surprises.  I have re-read this story too many times to count.  Here’s the blurb and an excerpt and see for yourself:

Loraine McIntyre longs for just one weekend to let down her hair and find a man who will help her live out all her fantasies before her conventional wedding to her very conventional finance’ and continuing her very conventional life.  Despite Stuart’s protests, she knows she has to do this or she’ll always feel she missed  something in life.  Goodbye Loraine, hello Rainie.  And hello Joe, the sex god with lion’s eyes she meets at the beach.  Hopping on his motorcycle with him, she roars off to a weekend of the wildest sex anyone could ever want.  But things are not always what they seem and life is about to hand Rainie a few surprises.

“Sounds like you should have a talk with Stuart.”  They were silent for a long moment.  Joe picked up on of her hands and played with the fingers.  “So Rainie-who-wants-to-be-wild.  Do you think I’d do?”
She frowned.  “Do?”

“You know.  For the weekend fling.  I’m healthy, momentarily unattached and I can promise you the sex will be better than you can imagaine.”

Her heart was beating in a stuttering rhythum.  A flutter deep in her womb began to increase in tempo.

While she chewed on her lip, Joe made the decision for her.  He swallowed the last of his drink, rose with lithe jungle grace and held out his hand to her.  “Come on.  I promise you an adventure you won’t forget.”

Rainie looked up at him.  A wildness glittered in his lion’s eyes, a hint of something feral and untamed beneath all those tanned muscles and that amazing grin.  Anticipation rolled over her.
“All right.”  She stood up, hitched the thin strap of her flat purse over her shoulder and gave him her hand.

He tossed their drink cups in a trash barrel and led her toward the street.

“Where are we going?”

“I rented a house down the beach for the weekend.  How does that sound?”

She paused.  “I don’t have nay clothes except what I’ve got on.  And my car’s in the garage here.”

The amber eyes darkened to a deep gold.  “If things work out you won’t need any clothes.  And your car’s safe at the hotel.  Anyway, I’ve got transportation covered.”

They stopped at the curb where a gleaming silver Ducati motorcyle restedon its kickstand.

Rainie’s mouth flopped open.  “Is this yours?”
“Sure is.”  He winked at her and handed her a helmet.  “Here.  You’ll need this.  Don’t want to splatter your brains before we get to that wild sex.”

Suddenly Rainie threw back her head and luaghed.  What the hell.  This was what she wanted, wasn’t it?  “Okay, Joe.  Crank’er up.”
She hopped onto the motorcycle behind him, wrapped her arms around his hard, jusculare body, her hands clasped against sun-warmed male skin and inhaled.  A cologne so light its fragrance was almost elusive mingled with the scent of the sun, the Gulf waters, the lingering coconut aroma of the pina coladas and the male essence that was uniquely Joe.  She had to squash an irresistible urge to pull up his shirt and lick his skin to see if he tasted as good as he smelled.

They roared down the street with wheeling seagulls squawking overhead and the rushing slipstream of the wind sweeping away the last vestiges of restraint.

Don’t forget to leave a comment (very important) and then go to www.desireeholt.com to see her next blog stop.