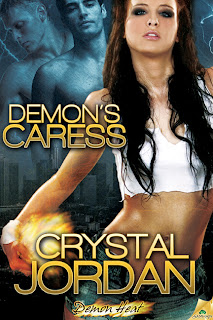 Usually, Maron is the hunter—a demon sent to earth to imprison evil souls and hurl them into the pit. It’s a dirty, thankless job, but someone has to take out the trash. By necessity, demons need a partner to tag ’em and bag ’em. Since her partner got roped into a Demon Triad, though, she’s stuck with just the tagging part until her boss sends reinforcements.

Her backup turns out to be the last two men she wants to see. Two bonded demons who’ve been trying to seduce her into a Triad for months. Sure, the Triad’s sexual bonds generate phenomenal soul-trapping power. Give up her independence? Never. Still, it’s quite a thrill to be the hunted, for a change.

Since a night of debauchery in which the three of them experienced a level of power that’s nothing short of explosive, Raum and Kobal have been maneuvering to complicate her eternity…and make her like it. She thinks she’s the most relentless demon hunter around? She ain’t seen nothin’ yet. They’re determined to claim her heart and body…if they can cage the evil soul they’ve been sent to capture.

Review:
I am not a virgin to Crystal’s books by any means.  Her Unbelievable series from Samhain is awesome and I highly recommend it.  But holy cow, why did I wait so long to read Demon’s Caress?  Apparently too long.  This book came out in early January and I’m just now reading it.  Shame on me for waiting.  And if you know me, I abhor waiting!

As most know, I’m not a huge paranormal junkie like everyone else but I do love angels and demons.  There are so many ways that you can write about angels and demons.  Crystal’s take on demons is original, sexy and believable.  The world that she has built for her demons is fantastic because hey, its everyday life among the humans.  It made sense to this reader and I didn’t need a primer to figure everything out.

Raum and Kobal are demons that are as different as night and day.  Perfect for each other but needing that third for their Triad.  After one night with Maron long ago, they knew that she was the one.  Maron, on the other hand had been badly burned when she bonded with her partner and never really got over it.

Maron is you.  Me. And everyone other woman that has been badly burned in a relationship before.  I felt her need to love and be accepted but I understood her closed off emotions from Raum and Kobal.  What she thought she needed wasn’t what she needed after all.

After I finished reading this book, I felt a little bereft.  Crystal’s books read fast but they are never rushed.  You just get sucked into them and before you know it, its over.  With your pulse racing and heart hammering long after the last word, you realize that you have been seduced into a world that Crystal has created and you want to go back.  *sigh*

5 Harlie’s and a “when’s the next book in the series coming out?”  Because I abhor waiting.